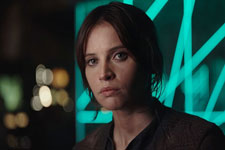 Ajay Kumar R / fullhyd.com
EDITOR RATING
7.5
Performances
Script
Music/Soundtrack
Visuals
8.0
7.0
8.0
8.0
Suggestions
Can watch again
Yes
Good for kids
Yes
Good for dates
Yes
Wait for OTT
No
Who can forget those good ol' days with Princess Leia and Luke Skywalker and Obi-Wan Kenobi and R2-D2/C3PO? If you are a Star Wars junkie and are still reeling under the nostalgia of George Lucas' 1977 space-opera Star Wars: Episode IV - A New Hope, and wish to relive those feelings, then Godzilla (2014) director Gareth Edwards' Rogue One: A Star Wars Story will serve as a blast from the past. This movie is a prequel to the '77 film, and ends around the point where the latter begins.

This prequel doesn't subvert the anthology's light and dark mood - instead it magnifies the latter's fatalism, taking it to the dark side further.

The Force comes with spoilers.

This grim chronicle "in a galaxy far, far away" is centred around the time after the Galactic Empire builds the Death Star - a moon-sized spaceship that can destroy worlds - with the help of several scientists including Galen Erso (Mads Mikkelsen). Erso, who is partly aware of the Empire's true intentions, builds a glitch inside its reactor, which can be tapped into and help facilitate the Star's decimation. Now that he is working for the Empire, Erso has to let to go of his daughter and protagonist of the story Jyn Erso (Felicity Jones), 16, and his wife with the help of a Rebellion member Saw Garrera (Forest Whitaker).

Years later, a well-trained, suave and battle-ready Jyn returns to the scene in the city of Jedha (not Jeddah, despite the Middle-Eastern aesthetics), the holy place of Jedis, along with Captain Cassian Andor and reprogrammed Imperial bot K-2SO (comic relief by Alan Tudyk). After getting caught in the crossfires of a brief exchange of fire between the local forces and the Imperial army, the trio meet a blind fighter-monk named Chirrut (Donnie Yen) and his long-time friend Baze (Jiang Wen), a heavily armed and armored warrior.

And after another hiatus, they meet a paranoid and suspicious Garrera out of the blue and seek information on Galen Erso and his Death Star. And so he shows her, quite unwillingly. All hell breaks loose after a while when Director Krennic (Ben Mendelsohn), the person who had recruited Galen to build the death ship ages ago, orders the destruction of Jedha. As the impact of the explosion is felt till Garrera's chambers, the frantic group, along with an Imperial defector pilot named Bodhi (Riz Ahmed), escape Garrera's lair, while the Rebellion leader chooses to die within his walls.

Upon learning the schemes and plots of the Empire, and that the Death Star has an Achilles heel, the young Jyn takes up the onus of gathering Rebellion troops and uniting them under one cause against the Empire and Director Krennic, despite it being a question of life and death; and a people would go to any extent to gain freedom from their colonial overlords. Then unfold fast-paced, emotional and gritty space-heroics with Jyn Erso and the rest, with lots of pain and sacrifice.

Although it is not clear whether the Star Wars fandom is ready for a divorce with the original saga, Rogue One is a refreshing detachment from the trilogy. It offers you a behind-the-scenes look into the original canon, including a crossover from Clone Wars: Animated Series (2008), and gives you a feel of what made Princess Leia lead the Rebellion forces to end the tyranny of the Empire.

What this movie completely succeeds at, as mentioned before, is in its rendition of impending doom. Also, the forces led by Jyn Erso are a band made largely of miscreants atoning for their malefactions. And there are also lonesome Chirrut and Baze, who just have no place to call home. And Cassian, who, like Jyn, lost almost everything at a very young age. How would you motivate a band of lost, broken, subdued and outnumbered soldiers to take on a violent and tyrannical space-dynasty for the sole reason that it is the right thing to do?

But despite being an engaging affair, Rogue One has its own shortcomings - a relatively unknown and inexperienced cast, hitherto unfamiliar characters, a protagonist with little character development and a stereotypical antagonist. Also, the film can confuse someone who is not familiar with the Star Wars trilogy, as little explanation is offered for character and event references.

The movie has a distinct visual style and vibrant palettes. Whether it is the the holy planet of Jedha - a cross between the deserts of Sahara and the rough terrains of Kandahar - or the tropical planet of Scarif - the Imperial army's base - Greig Fraser, who also rendered visuals for movies including Killing Them Softly, renders an experience new to the Franchise without disturbing its originality. And Fraser's Ultra Panavision lenses render consistent textures throughout. But what are most remarkable about the cinematography are the scale and size of the CG objects in the movie. If you are involved, you can feel the weight of the humongous spaceships crashing into one another or space-pods traversing through acidic, stormy and thunderous sapphire skies as strong gales knock them off course.

Michael Giacchino keeps the signature Star Wars-theme soundtrack alive, and also composes his own renditions and beats that add to the overall darkness of the movie and to the beginning of the New Hope that follows.

Although the character Jyn Erso seems to conjure up motivation to strike the Empire, out of thin air, Felicity Jones pours soul, grit and stamina into her as compensation. And even though some of her interactions are outweighed by too much exposition, the female-warrior that is Jones packs a punch and takes Star Wars to an alternate, unrecognisable dimension of melancholy, glory and doom. Jones slips into the character and becomes one with her. No wonder she is, as per The Hollywood Reporter, the highest grossing cast member of this film. Mikkelsen, Luna, Whitaker, Ahmed, Yen and Wen facilitate and empower Jones' emoting further. Alan Tudyk gets a special mention for lending his voice for the funny yet sensible Imperial bot.

There are also several Easter Eggs splattered across the movie for die-hard canon fans to observe.

Rogue One is truly a Star Wars Story worth telling; maybe a bit different, but one that would not disappoint the Fanbase.
Share. Save. Connect.
Tweet
ROGUE ONE: A STAR... SNAPSHOT
ROGUE ONE: A STAR WARS STORY SNAPSHOT 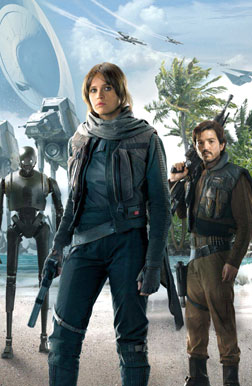 ADVERTISEMENT
This page was tagged for
Rogue One: A Star Wars Story english movie
Rogue One: A Star Wars Story reviews
release date
Felicity Jones, Diego Luna
theatres list
Follow @fullhyderabad
Follow fullhyd.com on
About Hyderabad
The Hyderabad Community
Improve fullhyd.com
More
Our Other Local Guides
Our other sites
© Copyright 1999-2009 LRR Technologies (Hyderabad), Pvt Ltd. All rights reserved. fullhyd, fullhyderabad, Welcome To The Neighbourhood are trademarks of LRR Technologies (Hyderabad) Pvt Ltd. The textual, graphic, audio and audiovisual material in this site is protected by copyright law. You may not copy, distribute, or use this material except as necessary for your personal, non-commercial use. Any trademarks are the properties of their respective owners. More on Hyderabad, India. Jobs in Hyderabad.