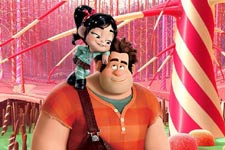 And then, the real fun begins.

For all the children of the '80s and the early '90s, to whom the words Sonic the Hedgehog, Super Mario Brothers, and Street Fighter make sense, Wreck It Ralph is a slice of 8-bit nostalgia. However, it still manages get the optimum mix of the retro and the contemporary, so the younger lot doesn't feel left out.

The story of this gaming nerd's extravaganza goeth thus. Wreck-It-Ralph is the bad guy in an arcade game called Fix-It-Riley (of course), whose good guy is (no prizes for guessing) Fix-It-Riley. A simple game featuring one building that Ralph keeps wrecking and Riley keeps fixing, Fix-It-Riley is just one game in a whole world of them, all of which inhabit an old-school arcade.

When there are no kids to push their buttons, all the characters lead social lives, have relationships, make friends, follow or break rules, etc. And, in the case of the "bad guys", become social outcasts, just like in any society.

Ralph is tired of being the bad guy. He's tired of having the thankless job of wrecking stuff for Riley to fix. He's tired of looking in from the outside at all the people of Niceland who have cake and pie and cozy little homes. He's tired of being part of a little bad-guy group called Bad-Anon (not kidding!) where all the villains meet to come to terms with the fact that "[They're] bad and that's good. [They'll] never be good, and that's not bad."

The breaking point for Ralph is when Riley and all the other Nicelanders celebrate Fix-It-Riley's anniversary and don't invite him. So, he decides that for once he'll win a medal for himself, which he is sure is the solution to all his social woes.

From there onwards he goes on a crazy journey through three different games, almost wrecks up the whole arcade, unearths a "conspiracy", and finally gets around to understanding what being a good guy really means.

The plot is corny as hell, but just as entertaining. The most entertainment you get is from figuring out all the references and the characters that were your friends for hours together. For instance, all the characters of Litwak's Arcade travel by a transit system that terminates at Game Central Terminal that is a digitally and lovingly recreated version of a certain New York City Beaux-Arts terminal. As for the rest, especially all the gaming references, we'll let you figure out for yourself as we'd rather not deprive you of the fun of it all.

The script and screenplay engage you from start to finish. The dialogues ("I guess you really gotta watch where you step in a game called 'Hero's Doodie'!" - hehe) are witty, smart, and often self-deprecating.

The lead characters have been delightfully executed. John C Rielly is perfect as the gruff but innately good Ralph. Sarah Silverman as a pre-teen potty mouthed "glitch" from Sugar Rush, a kart-racing game in the candyland to top all candylands, is a tad too shrill, but totally makes up for it with the pure spunk she infuses into her lines. Fix-It-Riley, voiced by Jack McBrayer, is the epitome of wholesomeness, but definitely not boring.

As a matter of fact, there is no part in the movie, except around ten minutes post the interval that do sort of drag, that bores you or has you stifling yawns.

The graphics and the music is where the makers really have a lot of fun, using all sorts of iconic music bits that are hidden away in the corner of your mind that still misses Amrutha Mall's Prime Time arcade. The fact that the visuals match the quality of Disney's Pixar ventures while being an in-house production is quite an achievement.

All in all, Wreck-It-Ralph is a great way to kill a couple of hours, and to take a walk down memory lane. Those too young or too old to do that can always go for the sheer delight of a good movie.

PS: There is enough toilet humour for the movie to be qualified as more of a PG than an outright kiddie flick.
Share. Save. Connect.
Tweet
WRECK-IT RALPH SNAPSHOT 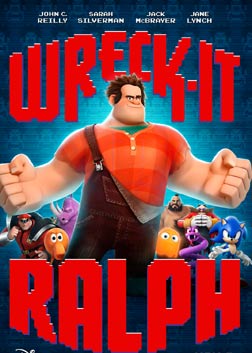 ADVERTISEMENT
This page was tagged for
Wreck-It Ralph english movie
Wreck-It Ralph reviews
release date
John C Reilly - Ralph (voice), Sarah Silverman - Vanellope (voice)
theatres list
Follow @fullhyderabad
Follow fullhyd.com on
About Hyderabad
The Hyderabad Community
Improve fullhyd.com
More
Our Other Local Guides
Our other sites
© Copyright 1999-2009 LRR Technologies (Hyderabad), Pvt Ltd. All rights reserved. fullhyd, fullhyderabad, Welcome To The Neighbourhood are trademarks of LRR Technologies (Hyderabad) Pvt Ltd. The textual, graphic, audio and audiovisual material in this site is protected by copyright law. You may not copy, distribute, or use this material except as necessary for your personal, non-commercial use. Any trademarks are the properties of their respective owners. More on Hyderabad, India. Jobs in Hyderabad.