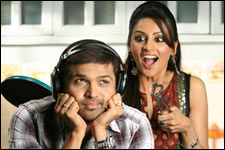 Nupur Barua / fullhyd.com
EDITOR RATING
6.0
Performances
Script
Music/Soundtrack
Visuals
7.0
7.0
6.0
5.0
Suggestions
Can watch again
Yes
Good for kids
No
Good for dates
Yes
Wait for OTT
No
You have to admire his tenacity. His Himeshness never gives up, and this weekend, he may just have a shot, finally, at delivering a hit. And not just because RA.One and Tell Me O Kkhuda are such bummers.

To begin with, Damadamm belongs to Purbi Joshi, if you can ignore the "hero" (difficult task, that, but not completely impossible). Himesh Reshammiya himself has written the story, and he obviously visualised himself as the protagonist. Who can stop him from being just that, especially when he is the producer, too? This time, he is without a cap, and smiles consistently (and awkwardly).

So Shikha (Purbi Joshi) and Sameer (Himesh Reshammiya) have been seeing each other for about 5 years, but now the time has come for Shikha to pay a visit to her home-town, Indore, for a family wedding. This is the first time that they will be apart for 15 days, and Sameer cannot wait for her bus to leave (but of course he does not tell her that). You see, Shikha is not only a control freak, but also a persistent nag, and Sameer now looks forward to complete freedom, even if it is for a couple of weeks.

So he breaks into a song that has the words 'freedom' and 'space' incorporated into it, as soon as the bus leaves, and dances and parties those days away. Life becomes blissful when his boss' pretty sister, Sanjana (Sonal Sehgal), is made his assistant at the film distribution office he works in.

In the meantime, Shikha is highly insecure, as her character demands. Not that Sameer is faultless, really. The biggest flaw in the story is Sameer's character. At no point does he muster enough courage to tell Shikha how he feels. He tells a confidante that he is tired of lying to her, but as far as the audience is concerned, there is no reason to.

Thankfully, unlike most Indian movies, this romantic comedy is not about the taming of the shrew. Instead, it is about the shrew driving her paramour into the arms of another woman. His infidelity and dishonesty is justified (on second thought, it is about how an Indian woman should "behave"), because she is not the docile young thing. Long live Shakespeare (whose 16th century sensibilities we Indians still understand)!

The screenplay has many other flaws, but they can be overlooked, because the overall experience of the movie can be summed into one simple word - fun. The story is surprisingly sensible and adult, and anyone in a romantic relationship will identify with the characters.

Purbi Joshi obviously had a ball while filming - she is by far the most gifted artiste in the movie (and one of the most in the industry). She goes from being a young harridan (an oxymoron, that) to the repentant lover to the mature woman, with total simplicity, and convincingly. And yes, she also manages to look hot - she does have the best clothes in the movie. Bollywood needs to sit up and pay attention to her raw talent.

Himesh Reshammiya believes he can act, so he does everything he can to make that a reality, all in vain. He cannot dance, cannot run, and cannot smile, without making faces. During the most intense moment of self-realisation, when Sameer is supposed to ponder, cry and scream, he ends up looking funny. His hair does not help, either. And almost half his dialogues are in English.

Sonal Sehgal looks pretty, and that is pretty much her role. She makes a convincing ideal girlfriend, but her character lacks depth and the fire for somebody that can attract the talented Mr. Reshammiya. Rajesh Khattar is wasted in his small role as the mean boss (except for firing a worker for daring to look at Sanjana as a sex object, he does not justify the fear instilled in his subordinates).

The songs are already popular, and, in keeping with the tone of the movie, entertaining. Madhushala pays tribute to Himesh's days of caps, tilted head and nasal voice. The famous Umrao Jaan, with the 'No touching, no touching, only seeing, only seeing' chorus is why you should sit through the entire end credits. The Mango song just does not make sense, though ('I miss you, oh ho, like mango').

Swapna Waghmare, the director, understands her audience, if the laughter in the theatres is any indication, but she could have toned down the irrelevant, forced humour. This is the second time this month that a television director has made more sense of a movie script than the other heavies in the industry have (refer to Nupur Asthana's Mujhse Fraandship Karoge). This could be the beginning of a new trend.
Share. Save. Connect.
Tweet
DAMADAMM SNAPSHOT

ADVERTISEMENT
This page was tagged for
Damadamm hindi movie
Damadamm reviews
release date
Himesh Reshammiya, Purbi Joshi
theatres list
Follow @fullhyderabad
Follow fullhyd.com on
About Hyderabad
The Hyderabad Community
Improve fullhyd.com
More
Our Other Local Guides
Our other sites
© Copyright 1999-2009 LRR Technologies (Hyderabad), Pvt Ltd. All rights reserved. fullhyd, fullhyderabad, Welcome To The Neighbourhood are trademarks of LRR Technologies (Hyderabad) Pvt Ltd. The textual, graphic, audio and audiovisual material in this site is protected by copyright law. You may not copy, distribute, or use this material except as necessary for your personal, non-commercial use. Any trademarks are the properties of their respective owners. More on Hyderabad, India. Jobs in Hyderabad.