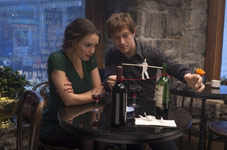 Josh / fullhyd.com
EDITOR RATING
8.0
Performances
Script
Music/Soundtrack
Visuals
8.0
7.0
7.0
10.0
Suggestions
Can watch again
Yes
Good for kids
No
Good for dates
Yes
Wait for OTT
No
With the recent onslaught of movies based on true incidents, we had some opportunity to reflect on why some of them are better than others. We appreciated verisimilitude in Everest, talked of authenticity despite dramatisation in Pawn Sacrifice and were grateful for masterful writing in Talvar. With The Walk, we come down to the only golden rule that exists - cinema is a director's medium, and the only thing that matters is that the director uses every resource at hand to translate a personal original vision into communicative visuals. Everything else be damned.

The Walk is one of those movies which remind you of what the movies are all about. Sure, it's about the story, but so is every other form of story-telling. Right from grandma's bed-time stories to reams of published pages of fiction to dance recitals, there are stories in all of them. What's special about the movies is the medium - the scope to create visuals, to immerse an audience in a scene like they are actually there, and very, very few people do it as amazingly well as Robert Zemeckis.

Zemeckis picks the story of Philippe Petit (a fabulous Joseph Gordon-Levitt), a daredevil highwire walker who famously wire-walked across the twin towers in 1973. The Frenchman and his accomplices indulge in copious amounts of hoodwinking in the process of gaining access to the towers and smuggling his equipment to the roofs. These portions of The Walk give it a certain heist-film quality, and you nod in agreement when Petit whimsically calls the adventure "Le Coup".

The film spends some time working in all the characters, chief among them Petit's girlfriend Annie (Charlotte Le Bon), his official photographer Jean-Louis (Clement Sibony) and his own wire-walking inspiration Rudolf Omankowsky alias Papa Rudy (Ben Kingsley). There are even more characters, but they all suffer from minimal character development. The actors aren't given a lot to do, and therefore sometimes appear quite unsure. Ben Kingsley, though, brings some warmth with his avuncular persona.

Gordon-Levitt owns his space, however. He is a flamboyant performer and brings flourish to his portayal of another flamboyant performer. From highly affable and charming at the beginning to high-strung and irascible as he nears the coup, he manages to bring alive a flimsily written character. We can't be sure how authentic his French is (the French accent is inconsistent at any rate), but the character of Petit is really about the quirky passion. That, Gordon-Levitt takes care of admirably.

But we shouldn't really dwell on the likes of characters or plot or screenplay because, as we mentioned, the raison d'etre of The Walk is the visuals. Zemeckis conjures up spellbinding frames, and the transition of the scenes is equally magical. The filmmaking has a sublime smoothness to it. There are any number of directors who can manufacture splendid imagery for its own sake, but Zemeckis uses all the technical wizardry and talent to render visuals that are as much story-telling devices as they are wonderful images.

There are several examples we can use to illustrate our point, and we will go with the most telling one - 3D. Zemeckis truly uses the third dimension. It isn't just cheap thrills or a gimmick to sell extra tickets - the drama genuinely springs from the depth. An arrow in projectile, juggled torches, straining cavalettis... they all make you invest. Every single slip on the rope sends a shudder down your spine. You will marvel at how a movie without a smidgen of violence places itself in the annals of spectacle cinema, cosily in the company of Mad Max: Fury Road.

Zemeckis makes use of every technical department to render his vision with best impact. The smoothness we talked about couldn't have been achieved without access to superb editing talent. The cinematography is the most obvious achievement for a film which relies so much on imagery. The music is fun, too, including a curious French rendition of Nancy Sinatra's "These Boots Are Made For Walking". And despite the cliché risk, the use of Fur Elise for the final walk proves to be a terrific choice.

The Walk should perhaps release with one of those warnings about viewer discretion for pregnant women, cardiac patients and children. There is a high likelihood that your stomach will turn as you witness the final walk, and we are given to understand that some viewers threw up during the climax scenes in the New York premiere. It isn't just Philippe Petit who has to be cautious about where he is stepping. If you are prone to vertigo, you'll have to think twice about stepping into a hall playing The Walk. If you don't, though, catch it in 3D. This one is as good as it gets.
Share. Save. Connect.
Tweet
THE WALK (3D) SNAPSHOT 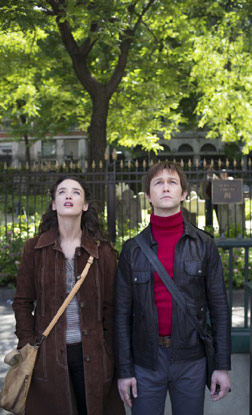 ADVERTISEMENT
This page was tagged for
The Walk (3D) english movie
The Walk (3D) reviews
release date
Joseph Gordon-Levitt, Ben Kingsley
theatres list
Follow @fullhyderabad
Follow fullhyd.com on
About Hyderabad
The Hyderabad Community
Improve fullhyd.com
More
Our Other Local Guides
Our other sites
© Copyright 1999-2009 LRR Technologies (Hyderabad), Pvt Ltd. All rights reserved. fullhyd, fullhyderabad, Welcome To The Neighbourhood are trademarks of LRR Technologies (Hyderabad) Pvt Ltd. The textual, graphic, audio and audiovisual material in this site is protected by copyright law. You may not copy, distribute, or use this material except as necessary for your personal, non-commercial use. Any trademarks are the properties of their respective owners. More on Hyderabad, India. Jobs in Hyderabad.