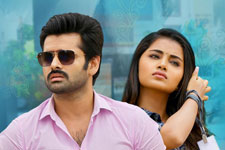 Sonali Dabade / fullhyd.com
EDITOR RATING
7.0
Performances
Script
Music/Soundtrack
Visuals
7.0
6.5
7.5
7.0
Suggestions
Can watch again
No
Good for kids
Yes
Good for dates
Yes
Wait to rent it
No
In a time and age when modern, gritty films are the mainstay, here comes a clean family entertainer that will transport you back in time to when rom-coms were all the rage. The title puts the Nagarjuna song intransigently in your head, and while the movie is no SPB it is alluring in all the right places.

Sanju (Ram Pothineni) is a happy-go-lucky guy from Kakinada who believes in doing the right thing. He wants to stay in Kakinada with his parents but they want him to get a job and grow wings. So he ends up getting a software job in Hyderabad, thanks to his uncle (Posani Krishna Murali). And his mother (Sithara) asks her old friend, Vishwanath (Prakash Raj), who is known to keep his promises, to let Sanju stay with him.

Vishwanath accepts Sanju into his home and into his life as a friend. However, he doesn't know that Sanju is falling in love with his daughter Anupama (Anupama Parameswaran), who Sanju has met on the train to Hyderabad. When Vishwanath, who has vowed that he will be Sanju's friend, comes to know of this, all hell breaks loose in a comic way.

What works heavily for Hello Guru Prema Kosame... is its comic timing. The changing rapport between Sanju and Vishwanath is the source of much of the fun in the movie, and a few comic situations make you laugh your guts out. The amazingly funny dialogues rescue the film from a plebeian script - indeed, for a movie to work while being packaged in a carton of clichés is rare, and despite this Hello Guru Prema Kosame... has the power to make you feel good right till the end thanks to many well-written lines.

Ram is good as the protagonist Sanju. You can identify with a lot of his ideologies, though they are many times wrapped in the comedy. Ram brings to life Sanju's carefree attitude coupled with the will to do the right thing. Anupama Parameswaran, as the docile Anu who dotes on her father, is good, too, but there's not much scope for her to show the full extent of her acting prowess in here. Aamani as Anu's sarcastic mother, and Sithara as Sanju's doting one, have tiny roles without any major scope for impactful performances.

The real star of the movie, however, is Prakash Raj. Torn between being a friend who doesn't go back on his word and a frazzled father of a young woman, he portrays Vishwanath with a comic timing that in no way overshadows the pain. Mirroring the sentiments of a middle-class father, he becomes Vishwanath with a passion that makes it impossible for you to visualize anybody else portraying the character better. It in some ways resembles his performance in Aakasamantha where he played a protective father scared of being separated from his daughter.

The music has the typical Devi Sri Prasad stamp on it, with the beats and the usage of English lyrics in the songs. While the songs are not memorable, they are catchy enough to watch, tap your feet to, and enjoy in the moment. The visuals aren't anything mind-blowing either - merely sufficient for a rom-com like this one.

Trinadha Rao Nakkina's direction makes Hello Guru Prema Kosame... a genuinely clean family entertainer. It's a nice, fun movie to watch on a lazy evening with just about anyone. You will laugh at the funny parts and cringe at some others, but when you think of the movie in entirety, you'll remember only the bits that you enjoyed.
Share. Save. Connect.
Tweet
HELLO GURU PREMA KOSAME SNAPSHOT 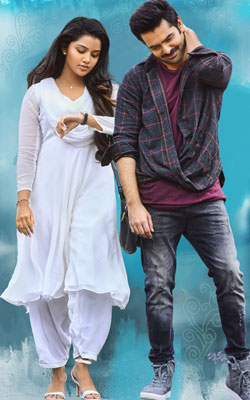