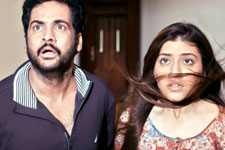 Spandana P / fullhyd.com
EDITOR RATING
4.0
Performances
Script
Music/Soundtrack
Visuals
6.0
3.0
6.0
6.0
Suggestions
Can watch again
No
Good for kids
No
Good for dates
No
Wait for OTT
Yes
Boochamma Boochodu has an advantage in that it is released at a time when horror-comedy flicks are selling like hot cakes. But the makers of this film have let that edge slip away, leaving behind a lackluster tale which does nothing to spook you or tickle your funny bone.

Like many a horror movie, this one too revolves around a lovey-dovey couple that has just moved into their plush new villa. As you rightly guessed, they witness strange events unfolding with each passing day. In their attempts to get to the bottom of things, they start inquiring about the previous occupants of the house, and realize that they have the company of two ghosts, who are hell bent on killing each other. It's hard to figure out how that works, considering that they are already dead!

After a point, the mystery has been unraveled, and the lead pair is made to enact the same scenes once every 15 minutes, with the only variation being the change in costumes. There are some feeble tinges of comedy with Vennela Kishore as the vaastu pandit and Posani as the charlatan exorcist. Indeed, the pantheon of comedians that were capable of elevating this movie to a new high are reduced to mouthing humorless lines in shabbily etched roles, and by the intermission, there is almost nothing left to this rapidly evaporating story.

The second half involves some desperate attempts at comedy which only disgust you further, and it is painful for fans to see Brahmanandam in a role that could have been portrayed by any insignificant actor.

The glue to this otherwise crumbling script is the performance of the lead actors. Shivaji, being seen after a long hiatus, once again showcases his capability for delivering comedy with ease, through both his dialogues and his expressions. Kainaz Motivala is a precious find - she puts in a fairly consistent performance, emoting just as much as is required, at a time when most upcoming actresses have you flailing in frustration. But the prowess of the duo is undermined as the tale progresses, and they are left mostly distorting their faces and repeating dialogues.
The climax is just as disappointing but by then you are left with no expectations whatsoever.

The background score is just as drab as the script, and there is nothing novel in the cinematography department as well. The music track however is fairly pleasant.

Boochamma Boochodu doesn't really hold a candle to any of the better-known movies of this genre that have been churned out in the recent past (read Premakatha Chitram and the more recent Gitanjali), and can be easily given a miss. It's quite likely to be on DVD, TV or even YouTube very soon.
Share. Save. Connect.
Tweet
BOOCHAMMA BOOCHODU SNAPSHOT 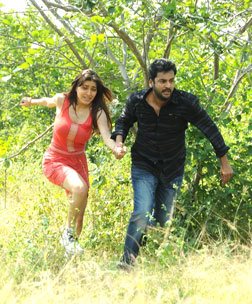 ADVERTISEMENT
This page was tagged for
Boochamma Boochodu telugu movie
Boochamma Boochodu reviews
release date
Shivaji, Kainaz Motivala
theatres list
Follow @fullhyderabad
Follow fullhyd.com on
About Hyderabad
The Hyderabad Community
Improve fullhyd.com
More
Our Other Local Guides
Our other sites
© Copyright 1999-2009 LRR Technologies (Hyderabad), Pvt Ltd. All rights reserved. fullhyd, fullhyderabad, Welcome To The Neighbourhood are trademarks of LRR Technologies (Hyderabad) Pvt Ltd. The textual, graphic, audio and audiovisual material in this site is protected by copyright law. You may not copy, distribute, or use this material except as necessary for your personal, non-commercial use. Any trademarks are the properties of their respective owners. More on Hyderabad, India. Jobs in Hyderabad.