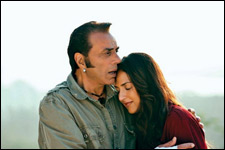 Deepa Garimella / fullhyd.com
EDITOR RATING
2.0
Performances
Script
Music/Soundtrack
Visuals
5.0
2.0
4.0
4.0
Suggestions
Can watch again
No
Good for kids
No
Good for dates
No
Wait for OTT
No
Hema Malini was evidently feeling very nostalgic as she made Tell Me O Khuda, but had few resources at hand. She wanted all (okay, many) of her former colleagues together in one film/frame, and she wanted all this in a film that, while it works as a re-re-re-launch vehicle for her daughter, also reminds everyone of the '70s.

The result is a charmless collage of celebrity walk-ins with infinitely lesser substance, grace, magic, glamour (and, evidently, budget) than a certain Jeena Isi Ka Naam Hai (which was, incidentally, hosted by Farooq Sheikh, who also stars in this sad production).

Roughly based on Mamma Mia, Tell Me O Khuda is both poorly conceptualized and poorly executed. Acclaimed writer Tanya (Esha Deol) stumbles upon a secret in her family attic - her warm, loving parents (played by ex-onscreen couple Farooq Sheikh and Deepti Naval, both as graceful as ever) are merely her foster parents. She sets off on journey after journey to find out who her real father is, and this is how Vinod Khanna, Rishi Kapoor and Dharmendra (wink, wink - did you miss the Deol in-joke here?) are in the picture.

Hema Malini should really have gotten a professional to put her film together. All she seems to have had was a good intention to bring to theatres a warm-hearted women's-magazine kind of story about a girl re-uniting with her dad.

Appallingly enough, nothing in the film works, except for Johnny Lever's scintillating tomfoolery. The writing is silly and immature, and ridiculously preposterous situations are all over the story. Plus with the passable visuals, this movie looks and feels like a bad television serial.

The sequence in Rajasthan, in which Vinod Khanna plays a Rajput royal, is a case in point. The Rana is meant to be a venerable ex-king with stature and elegance on par with his grand castle, but all this film makes Khanna look like is an out-of-work actor. Amidst the nonsense is an attempt to "speak up" against female foeticide, which falls flat on its face.

Tanya's meeting with Zardari (Rishi Kapoor) in Turkey reeks of zero thought in writing. What was that bit about Zardari trusting Tanya, a complete stranger, in curing his mentally ill wife, while choosing to play with that very stranger's emotions?

And the less said about Dharmendra, the better. Despite pictures of a younger, more amazing Dharmendra on Tony Costelo's (the character he plays) wall serving to kick up a slight retro mood, it is painful to see the man age like this in shoddy movies.

The final shootout set in Goa seems like the director was trying to pay her tributes to cinema of the '70s, and sure enough, throws in some cheesy villains and cheesier action. However, this is not Farah Khan making the movie, so the shootout looks like really bad '90s cinema.

There's worse news: the performances don't help the film at all. The seniors - including Madhoo, who saunters into the Rajasthan plot to overact enough to make herself instantly forgettable - are in this to do Hema Malini a favour. The juniors are in this for the pay cheques. Esha Deol, who hasn't picked up acting, cannot do the film any justice.

The songs haven't caught on either. In any case, no one's staying in the theatres long enough to notice that Salman Khan is even doing an item song.

Well, we all know the Deols deserve better, especially in an unfair world that worships anything within 50 feet of a Bachchan. Making their own movies probably isn't the solution, though.
Share. Save. Connect.
Tweet
TELL ME O KKHUDA SNAPSHOT

ADVERTISEMENT
This page was tagged for
the tell me o kkhuda movie in hindi hd
Tell Me O Kkhuda hindi movie
Tell Me O Kkhuda reviews
release date
Esha Deol, Arjan Bajwa
Follow @fullhyderabad
Follow fullhyd.com on
About Hyderabad
The Hyderabad Community
Improve fullhyd.com
More
Our Other Local Guides
Our other sites
© Copyright 1999-2009 LRR Technologies (Hyderabad), Pvt Ltd. All rights reserved. fullhyd, fullhyderabad, Welcome To The Neighbourhood are trademarks of LRR Technologies (Hyderabad) Pvt Ltd. The textual, graphic, audio and audiovisual material in this site is protected by copyright law. You may not copy, distribute, or use this material except as necessary for your personal, non-commercial use. Any trademarks are the properties of their respective owners. More on Hyderabad, India. Jobs in Hyderabad.