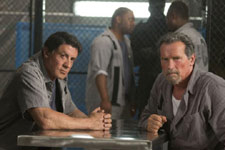 Swayamsrestha Kar / fullhyd.com
EDITOR RATING
5.0
Performances
Script
Music/Soundtrack
Visuals
5.0
4.0
4.0
5.0
Suggestions
Can watch again
No
Good for kids
No
Good for dates
No
Wait for OTT
Yes
Star power is not when you have hordes of fans clamouring around for a whiff of your underwear before they are bewitched away by the next big thing around the block. Star power is not how many movies you appear in or how many made-of-money mattresses you recline on. Star power is also not bagging a primetime guest slot on Oprah's show, whereby she proceeds to grill you about your favourite bedtime stories so that audiences can suitably "aww" over the whole spectacle.

Star power is when you are a couple of years away from your 70th birthday and you still manage to cause a fangirl/boy's heart to flutter a bit when you goofily smirk at a security camera in an otherwise lacklustre frame from your latest movie.

Escape Plan, the most recent prison-break thriller from Hollywood - the land of beefed up, so-tough-I-chew-horse-tranquilizers-for-headaches convicts, supremely swaggalicious anti-hero protagonists and the occasional bimbo - has Sylvester Stallone and Arnold Schwarzenegger fitting into all of the aforementioned slots, and even overflowing some of them. And boy! Talk about star power, indeed!

Harbour no delusions; the movie, by itself, wouldn't be worth anyone's time of the day. The premise, though intriguing, is let down by a shoddy screenplay, and at times, by ridiculous scenes.

But through it all, your attention is sustained by two veterans, who, after having discovered (or rather, invented) roles that only they can bite into and chew quite spectacularly with characteristic panache, have proceeded to enjoy the heck out of it all.

Ray Breslin (Stallone) is co-founder of a firm that specializes in building escape-proof incarceration facilities for convicts. He personally infiltrates prisons (posing as a convict) and breaks out of them, in order to illustrate the flaws in the security systems.

One day, a CIA officer, Jessica Miller (Caitriona Balfe), makes a rather profitable offer to the firm, in exchange for Ray entering (undercover, as a prisoner) a super-tight correctional facility to test out its security system.

But of course, once Ray has confidently strode into it with all the trust of a man who thinks that he can get out by revealing his real identity anytime he wants, he discovers that he is to be detained in a prison which, for all purposes, appears to be the cousin of the one in which Magneto (and, more recently, Khan) was locked in, forever.

It's all cuboid glass boxes, masked guards, closed environment without any sign of the sun or the sky, and even without any idea about the passage of time, right in the middle of freaking nowhere. Quite literally, since twice in the movie, in response to some or other person's "You will never get out of here" taunt, Ray asks, "Where is here?"

It's supposedly the place to put in the men (we honestly couldn't spot a single woman amongst that lot) who need to be made to disappear off the grid.

Ray is accosted by Emile Rottmayer (Arnie, rocking a greying French beard), a fellow prisoner. Reluctantly, Ray befriends Emile, and the two start plotting to break out of the prison.

The whole thing has a stale feeling to it, and many of the dialogues are lost in Stallone's incorrigible slurring. The other actors have next-to-nothing to do, apart from telling Sly or Arnie how awesome either of them is. There are also some glaring loopholes in the plot that you might mull over when you have slumped back in your seat because neither of our boys is gracing the screen at the moment.

The cinematography is pretty standard, and the editing is adequate. The movie gains some momentum towards the end, when the grand escape is being orchestrated.

And then, all of a sudden, Arnold Schwarzenegger gets hold of a machine gun, and the camera slows down, panning his face, showing us a close-up of those deep-set eyes, the rather immobile facial expression while he faces armed adversaries, and the furrowed brows, and reminding us just how diligently we had oohed and aahed over Skynet's favourite robot assassin once.

As mentioned earlier, the movie wouldn't even have existed if some smart movie exec somewhere hadn't come up with the brilliantly innovative idea of "Oh! Let's put Rambo and Terminator in a movie, and have them hulk at the camera while bantering amongst themselves, before they decide to blow some brains." True to its intention, the film showcases Stallone's extremely sinewy biceps and Arnold's rippling face muscles to the fullest.

While Stallone plays the more restrained of the two characters, Schwarzenegger gets to engage whatever acting prowess he had hoarded up since the time that dinosaurs were wiped off the face of the earth. Both actors breeze (we thought it would be impolite to use the word "wheeze") through the frames with a nonchalance that only the ones with unquestionable star power can exude.

Watch Escape Plan if you are that person who goes all whooo when Arnie smirks at the camera (there were quite a few of them in the movie hall with us), or when Sly stares into it with the most deadpan expression. Otherwise, just dust off your Rambo/Rocky/Terminator DVDs, and try re-watching them simultaneously.
Share. Save. Connect.
Tweet
ESCAPE PLAN SNAPSHOT 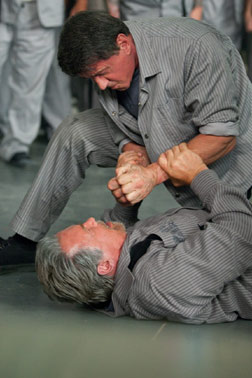 ADVERTISEMENT
This page was tagged for
Escape Plan english movie
Escape Plan reviews
release date
Sylvester Stallone, Arnold Schwarzenegger
theatres list
Follow @fullhyderabad
Follow fullhyd.com on
About Hyderabad
The Hyderabad Community
Improve fullhyd.com
More
Our Other Local Guides
Our other sites
© Copyright 1999-2009 LRR Technologies (Hyderabad), Pvt Ltd. All rights reserved. fullhyd, fullhyderabad, Welcome To The Neighbourhood are trademarks of LRR Technologies (Hyderabad) Pvt Ltd. The textual, graphic, audio and audiovisual material in this site is protected by copyright law. You may not copy, distribute, or use this material except as necessary for your personal, non-commercial use. Any trademarks are the properties of their respective owners. More on Hyderabad, India. Jobs in Hyderabad.