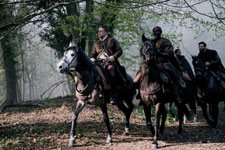 Vaishnavi Kulkarni / fullhyd.com
EDITOR RATING
7.0
Performances
Script
Music/Soundtrack
Visuals
6.5
6.0
8.5
8.0
Suggestions
Can watch again
No
Good for kids
No
Good for dates
No
Wait for OTT
No
In King Arthur: Legend Of The Sword, director Guy Ritchie tackles the myth surrounding the legendary Excalibur, the sword of the true king of England. Its range of impressive features would have been highly coveted in modern-day warfare, too. With touch-based recognition and activation, a powerful back-lit display, time-warping capabilities, and the power to vanquish enemies in a single stroke, this is no regular, run-of-the-mill sword (for the full list of specifications, refer to Arthurian legend).

The movie begins with the kingdom of Camelot under siege, attacked by elephant-like monsters the size of mountains hell-bent on reducing the palace of King Uther Pendragon (Eric Bana) to rubble. In a rather messy narrative that does not do much to bring the audience up to speed with the plight of the city, Uther ends the battle by felling Mordred, an evil and greedy sorcerer.

Unfortunately for the King and his family, evil lurks far closer to home. The movie draws curious parallels to Disney's Lion King - Uther, the brave and benevolent ruler, murdered by his own brother Vortigern (Jude Law), who is jealous of Uther's powers and wishes to usurp his throne. Uther's son, Arthur, is left an orphan, drifting away in a boat to eventually land up in Londinium, where he is taken in by a group of prostitutes and looked after.

After numerous time-jumps that are rushed glimpses into Arthur's years of growing up, we are introduced to the lost prince as an adult (Charlie Hunnam). He is resourceful, loyal and an excellent fighter, but plagued by dreams of the horrors he witnessed as a child. After landing in hot water with King Vortigern over his treatment of a some of the King's guests and attempting to evade capture, he is caught by Vortigern's soldiers (called Blacklegs) for a different purpose - to be tested (along with other men of the same age group) by Excalibur for his royal lineage.

When Arthur manages to wrench Excalibur from the stone in which it is embedded, his Pendragon bloodline reveals itself, and Simba finally meets evil uncle Scar. He is saved from his public execution by members of a rebel group, the Resistance, comprising of the Mage (Astrid Berges-Frisbey), Goosefat Bill (Aidan Gillen) and Sir Bedivere (Djimon Hounsou).

What follows is a series of battles for Arthur - he must overcome his own resistance of the sword, and conquer the memories of his past which are causing his mind to be at war with itself. He must battle the terrors of the Darklands and of his past before he is ready to take back what is rightfully his. There are scheming and planning, botched assassination attempts and gory character deaths, and a lot of anguish. The conclusion is predictable but welcome, leaving the end open for sequels.

The plot of the movie is fairly generic, no different from those of the thousands of tales of princes who return to claim their birth right. It is interesting to observe that as happens in most stories that deal with prophecies, the actions of the villain in trying to stop the prophecy from coming true end up shaping his nemesis.

The biggest flaw of the film is its convoluted style of narration - it is rife with fast forwards and fragmented flashbacks, and missing moments that are filled in later on. The audience is left utterly bewildered at some points, and the confusing way in which the fight sequences are shot does not help.

The film also vacillates between scenes that are so fast-paced that you struggle to keep up and scenes that are as crawlingly slow as Arthur taking around 50 deep, shuddering breaths in a row while absolutely nothing else happens.

The 3D effects are brilliantly done, however, and you find yourself reflexively flinching away from flying debris and arrows far too often. They make the film worth a theatre watch, though the effects are slightly excessive and overwhelming during the ultimate battle.

Another highlight of the film is its soundtrack. The music is catchy and lively, with a sense of urgency as well as a touch of the medieval era and magic. It is the saving grace of the film in some of its weaker moments.

None of the cast gives a particularly noteworthy performance - while they all meet the bare minimum requirements of their characters, they fail to make a lasting impression. Charlie Hunnam does a fair job as the protagonist. He is rugged and reckless, and even manages to amuse the audience at times. However, he falls short when his role demands pain and troubled emotions.

Jude Law, though not terrible, fails to convey the conflict and corruption of his character adequately. He lacks a strong villainous vibe, and ends up seeming more like a man led astray than an evil, conniving bad guy. Astrid Berges-Frisbey suits the role of the Mage in her looks and physique, but manages to go the length of the movie without varying her facial expressions or the tone of her voice much.

Djimon Hounsou, Aidan Gillen and Eric Bana actually do a better job than the leads in their supporting roles, whether it's the gruff leadership of Sir Belvidere, the sneakiness and cunning of Goosefat Bill or the honour and courage of King Uther. The movie also stars some (literally) larger-than-life creatures, including some sort of a hybrid cross between the Kraken and Ursula the sea-witch, giant snakes, and even bigger birds capable of carrying off the aforementioned giant snakes.

King Arthur: Legend Of The Sword is a fun watch, though more glitz and glamour than anything of actual substance. You can watch it for the effects and music, and enjoy the medieval sword-fights and the occasionally amusing banter - as long as you aren't too sleepy to stay abreast!
Share. Save. Connect.
Tweet
KING ARTHUR: LEGEND OF... SNAPSHOT
KING ARTHUR: LEGEND OF THE SWORD SNAPSHOT 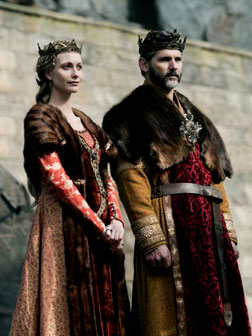 ADVERTISEMENT
This page was tagged for
King Arthur: Legend of the Sword english movie
King Arthur: Legend of the Sword reviews
release date
Charlie Hunnam, Katie McGrath
theatres list
Follow @fullhyderabad
Follow fullhyd.com on
About Hyderabad
The Hyderabad Community
Improve fullhyd.com
More
Our Other Local Guides
Our other sites
© Copyright 1999-2009 LRR Technologies (Hyderabad), Pvt Ltd. All rights reserved. fullhyd, fullhyderabad, Welcome To The Neighbourhood are trademarks of LRR Technologies (Hyderabad) Pvt Ltd. The textual, graphic, audio and audiovisual material in this site is protected by copyright law. You may not copy, distribute, or use this material except as necessary for your personal, non-commercial use. Any trademarks are the properties of their respective owners. More on Hyderabad, India. Jobs in Hyderabad.