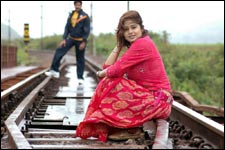 Deepa Garimella / fullhyd.com
EDITOR RATING
4.5
Performances
Script
Music/Soundtrack
Visuals
7.5
3.5
5.5
4.0
Suggestions
Can watch again
No
Good for kids
No
Good for dates
Yes
Wait to rent it
Yes
Incredibly, everyday, aspiring fashion designer Kalyan (Vadde Naveen) goes up to perfectly strange women on the street and gives them fashion advice. Even more incredibly, he does this without having a stunt master and an insurance policy in his back pocket. And even more mind-blowingly incredibly, none of the women he has met so far has given him a piece of her mind. That is because none of them had any.

He then has an encounter with the feisty Shweta (Sangeetha), who makes unparliamentary remarks on him and his upbringing. As a result, Kalyan's father (Chalapathi Rao) sends him away from home, and tells him that he should return only after winning the respect of the woman who insulted his dad. Kalyan finds this unreasonable, but agrees anyway, since that is the shortest route to the interval.

Next, Kalyan gets a job as Shweta's boss. What Kalyan doesn't know is that it was Shweta who got him the job, and so keeps hating her initially. But once Kalyan knows the truth, he starts falling in love with her. Later, he shockingly discovers that she's already married. He now wants to make a fresh start to life. Little does he know that it's not about what he wants â€" it's about how much paper the scriptwriters have left. The rest of the story consists of fights, a flashback, and a slightly far-fetched climax.

Srimathi Kalyanam is not a bad film, since it has a story that leads somewhere, a mellow romantic track, and some good dialogues. The first half is pretty breezy, and the hint of courtship between the lead pair has been handled quite well. Where the movie falters is in the second half, whose pace is so slow that you keep forgetting to open your eyes every time you blink. And when you do remember to open them, there are the songs every 10 minutes that'll make you blink right back.

The tacky melodrama and lack of attention to detail also contribute to making this a pretty mediocre offering. And we haven't spoken about the villains as yet. Their grime and outdated-ness make the rest of this flick seem like Avatar by comparison.

Both Vadde Naveen and Sangeetha are on screen after really long, and deliver good performances. They're quite well-cast in the mature roles that this script demands. A few of the character artistes, including Chalapathi Rao and Sudha, are as spontaneous as usual. However, the directorial faults lend this movie an amateur feel.

The background score is well-composed, and might lead you to mistakenly believe that the 1,567 songs are, too. It is also unfortunate that this film doesn't boast of slick technical values - its dull settings and pedestrian cinematography are among the many factors that'll keep it from attracting audiences in hordes.

In sum, Srimathi Kalyanam is about decent. Sadly, the positive emotional baggage of trendier, smoother new-age cinema is likely to affect your expectations.
Share. Save. Connect.
Tweet
SRIMATHI KALYANAM SNAPSHOT

ADVERTISEMENT
This page was tagged for
tellugu srimathikalyanam full move com
srimathi 21f movie review telugu 123
srimathi kalyanam telugu movie wiki
Srimathi Kalyanam telugu movie
Srimathi Kalyanam reviews
Follow @fullhyderabad
Follow fullhyd.com on
About Hyderabad
The Hyderabad Community
Improve fullhyd.com
More
Our Other Local Guides
Our other sites
© Copyright 1999-2009 LRR Technologies (Hyderabad), Pvt Ltd. All rights reserved. fullhyd, fullhyderabad, Welcome To The Neighbourhood are trademarks of LRR Technologies (Hyderabad) Pvt Ltd. The textual, graphic, audio and audiovisual material in this site is protected by copyright law. You may not copy, distribute, or use this material except as necessary for your personal, non-commercial use. Any trademarks are the properties of their respective owners. More on Hyderabad, India. Jobs in Hyderabad.