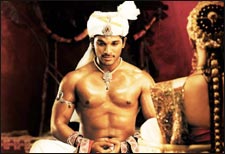 Deepa Garimella / fullhyd.com
EDITOR RATING
6.0
Performances
Script
Music/Soundtrack
Visuals
7.0
5.0
6.0
6.0
Suggestions
Can watch again
No
Good for kids
No
Good for dates
Yes
Wait for OTT
Yes
Despite all the fanfare that Varudu gives pretty much everything except its villain, the movie derives every ounce of its strength from its villain. Though designed to make the good look good, Varudu's evil overtakes the good and ends up looking far better than it.

The movie begins by glorifying the honorable qualities of Sandeep (Allu Arjun), a modern party-going son of rich parents with the extravagance of moral values of generations ago. When his parents (Ashish Vidyarthi & Suhasini) tell him they'd like to see him get married, he agrees, and much to their bewilderment, asks them to look for a bride for him.

What most of today's generation would consider a frightening gamble, Sandeep stretches to stupefying proportions - he vows to not even take a look at his bride or her photograph until they're both on the pelli-peetalu. What happens during the wedding and how the villain who enters the picture is dealt with forms the rest of the story.

The first half of the movie is spent in paying homage to the institution of marriage and in telling you why some of the technicalities of a typical Hindu wedding ceremony matter as much as they do. It's an undeniably beautiful concept for a film to be dealing with, and does have quite a few heartstrings tugged at by the time the hero and heroine finally get to see each other. However, there's a good chance that people will find all this less than engaging. That is because this kind of an idea is best left to the sugar-candy specialists who'd are good at making you feel guilty that you haven't married yet, or worse, that you haven't married the right way.

The publicity stunt over the heroine's identity was evidently written into the script. In fact, at this point of the film's release, people are eagerly sitting through the first weddingy, bantery half possibly more because of this very intrigue, and not really because Gunasekhar builds up any Hum Aapke Hain Kaunish camaraderie or drama. This novelty is probably already wearing off, so there's that half gone to the hatchet.

Which brings us to the better half of the movie. Despite the cheesiness of the fights and chases, and despite the absence of comedy, the second half of the flick is fairly entertaining fare, mostly because of its villain. Arya, who plays Diwakar the villain, manages to make you forget this movie even had a first half. Don't get us wrong - his role of the village drama-artiste who takes his villainous roles too seriously, is not an artfully written character, and tilts more towards being a campy Mogambo. But as the pivot of Varudu, he is great redemption for the rest of the flick.

Needless to say, Arya overshadows Arjun in post-experience recall value. He glowers and fights to only semi-menacing effect thanks to the script, but ends up triumphantly as the most enjoyable character in the flick. Arjun is bright and energetic, but he hasn't that much to do by way of romance or comic dialogues - he just has to be Superman. By the way, it's also pretty unreal to watch him play a groom reveling in happiness at his wedding almost more than a shy bride would.

The heroine acts well, and her work in the future might be interesting to watch out for. Suhasini, Ashish Vidyarthi, Sayaji Shinde, Ahuti Prasad and others are their usual talented selves, though none of these roles have any real energy. And the rest of the wedding party, that is reportedly made up of several real families, is pretty amateur.

Mani Sarma churns out some rather colorless fare, save for a few tunes including the signature of the flick. The visuals aren't impressive, and for a film supposedly centred round a wedding, the wedding set looks pretty synthetic, as do most of the stunts. However, the final fight between Arya and Arjun has been choreographed well.

Well, Varudu might get its audiences because of a lack of a solid menu of better options for the next few weeks at least. Catch this if you're caught movie-less.
Share. Save. Connect.
Tweet
VARUDU SNAPSHOT

First 30 minutes creates a good build up to the movie and gives it a great scope, which is brutally destroyed in the next 2 hours. The great expectations which are built by hiding the lady lead in all the film promos is totally shattered when we see her for the first time in the movie. Varudu - Allu Arjun looks fabulous. The heroine, kills the whole feel of what was supposed to be a pair made in heaven.

The heroine needs a complete paragraph dedicated to her. In the movie, at the time of marriage Allu Arjun looks awesome and when the next frame moves to the heroine, it was a total let down watching her. I was hoping to see somebody like samantha (jessee) and I saw some lady which did not trigger the faintest of the spark in my heart. Heroine is picha lite - you will only realize her talent after watching her with allu arjun in the only song which they work together. In that song you see that she is is an extremely poor dancer and an expression less actor. The director/producer seemed to have picked her from some satyanarayana vratham pooja in a relatives family. Physical features of the heroine are strict NO NO for me - her body lacks curves, shape and the kuss factor. She does not even have the girl next door looks. I am still wondering the reasons - why she is choosen.
Now coming to Villan. If you look at only the
role assigned to him by the director, the villan did complete justice to the role. But first of all we need to ask the question - is that role sensible, even though it is the role of a villan. It is a role of a complete sadist which looks unbelievably fictional.
Then, there is one old grandpa who pops in every now and then bhashans some sense to the audience which I and my friends could not digest. Some senti close ups of Asish vidhyarthi (varudus father) and suhasini (varudus mother) looked totally induced, unnatural and out of sync.
The highlight (kidding) of the movie is the fight on top of karimnagar NTPC Boggu pillars. The location of the pillars in the middle of a flower garden around the pelli pandiri was unexplainable.

The only thing I can say after seeing this is - waaow what a marriage setting, possible only in Alice in Wonderland (again kidding). The final fight setting was inspired from the movie 300. If you remove the gravity defying stunts in the last fight the other moves in that last fight were choregraphed really good. The fight, I felt was like as if I was watching some fictional movie in the line of lord of the rings or 300 - Totally unnecessary for such a social family movie.
Finally I want to say "Eee movie chooste Dimma Tirigi Mind Block aithado" - ade Varudu.

ADVERTISEMENT
This page was tagged for
Varudu telugu movie
Varudu reviews
release date
Allu Arjun, Bhanu Mehra
theatres list
Follow @fullhyderabad
Follow fullhyd.com on
About Hyderabad
The Hyderabad Community
Improve fullhyd.com
More
Our Other Local Guides
Our other sites
© Copyright 1999-2009 LRR Technologies (Hyderabad), Pvt Ltd. All rights reserved. fullhyd, fullhyderabad, Welcome To The Neighbourhood are trademarks of LRR Technologies (Hyderabad) Pvt Ltd. The textual, graphic, audio and audiovisual material in this site is protected by copyright law. You may not copy, distribute, or use this material except as necessary for your personal, non-commercial use. Any trademarks are the properties of their respective owners. More on Hyderabad, India. Jobs in Hyderabad.