When In Rome Review 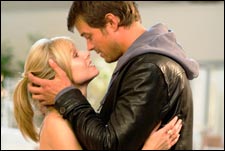 Samrat Sharma / fullhyd.com
EDITOR RATING
2.5
Performances
Script
Music/Soundtrack
Visuals
2.5
1.0
6.0
5.0
Suggestions
Can watch again
No
Good for kids
No
Good for dates
Yes
Wait to rent it
Yes
Formulaic romantic comedies should be down to a check list form with quick checks for sanity by now. There is no hiding the fact that these low rent 'films' are a quick painless cheque for everyone involved, and made by Hollywood studio executives. (The director is just the guy who tells the DP where to point the damn camera.)

Simplicity itself. Make a few calls to down-on-their-luck or up-and-coming actors, get a leading man who looks like a Greek God and has the personality of oatmeal, and an actress who is cute, people vaguely know, and can be suitably blonde. Get a director out for a cheque before his next action dud, and hack writers who can turn in a couple of poop jokes and a PG-13 rating, ask them to mash out a quirky plot, and see the dollars come in.

When In Rome cannot even accomplish this. Think about it for a second. The low, low, low bar Hollywood has set for romantic comedies proves too much for When In Rome to match.

It might be down to the fact that for the couple who have just met cute to ultimately be together in the end, there has to be an adversity, a conflict to surmount. When In Rome has none. When Beth (Kristen Bell) meets Nick (Josh Duhamel) in Rome while in town for her sister's wedding, she likes him, but thinks he might be too good to be true. In her wanton drunkenness, she picks out some coins from an enchanted well which makes those people who dropped said coins to fall in inexplicable love with her.

That's the comedy - these wackadoodle characters creepily stalking her all around town. The conflict is simply that Beth thinks she might have taken a coin for Nick as well! Oh, Beth. He doesn't like you because you picked a stupid coin, he likes you because you're crazy and he's too stupid to notice.

For the entirety of this plodding, dull and lifeless film, you are expected to be thrilled by the question - does one coin belong to Nick, or does it not? The answer to which, this being a standard rom-com (rom-bomb?), is apparent to us.

The four gentlemen in love who Beth definitely does not like are not funny enough for us to bide the time, so it really is up to Bell and Duhamel to save the day with their charisma, personality and charm. Maybe that's the other thing wrong with the film - Bell is shrieky, crazy, and definitely not the cute girl you remember from Veronica Mars. I may have said that this might be because her charisma doesn't fill the larger scope of a film, but that would give credit to Mark Steven Johnson in making a film with scope, which is clearly not the case.

Josh Duhamel, though, owed someone some major favours (or maybe they owed him?). He is clearly wrong for a character who doesn't have to shoot at robots the size of the Empire State building. Faced with a diminutive Bell and no green screen, he looks lost and angry, and, worse, without any discerning personality. It gets so bad that unless the camera focuses on him solely, you stop noticing he's there.

When In Rome is a stupid, boring and horrible film. It is not even as bad or good as the other formulaic rom-coms. It desperately wants to, but it simply isn't. If you watch this, I pity you. If you like it, we're not friends.
Share. Save. Connect.
Tweet
WHEN IN ROME SNAPSHOT

ADVERTISEMENT
This page was tagged for
When In Rome english movie
When In Rome reviews
release date
Kristen Bell, Josh Duhamel
theatres list
Follow @fullhyderabad
Follow fullhyd.com on
About Hyderabad
The Hyderabad Community
Improve fullhyd.com
More
Our Other Local Guides
Our other sites
© Copyright 1999-2009 LRR Technologies (Hyderabad), Pvt Ltd. All rights reserved. fullhyd, fullhyderabad, Welcome To The Neighbourhood are trademarks of LRR Technologies (Hyderabad) Pvt Ltd. The textual, graphic, audio and audiovisual material in this site is protected by copyright law. You may not copy, distribute, or use this material except as necessary for your personal, non-commercial use. Any trademarks are the properties of their respective owners. More on Hyderabad, India. Jobs in Hyderabad.