Up In The Air Review 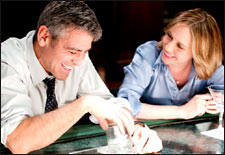 I care about Natalie Keener, a young spunky associate who took a shitty job for love, but did it as well as a young, naive person could. She is a kid, and vulnerable, and it shows.

I am intrigued by Alex Goran, the sexy, businesswoman obsessed with her Blackberry, her credit cards, and looking for something fleeting in her life that has a layer to it that I won't spoil.

Even Craig Gregory, the smarmy boss, is fulsome and wise-ass enough for me to at least get him (in as much as you need to 'get' a stereotype).

Here's why: he has no center. There is no soul. He loves his life out of a suitcase, and the faint disinfectant smell of airports, and the efficiency with which he makes his way around them. He lives for hopping on a plane and earning miles. But, that's it. Why does he do that? Why is he in the business of letting people go, and why does that matter to him?

I would have screamed "Serial Killer" and ran, if the character wasn't played by George Clooney. He of the inexhaustible charisma and soothing voice and buckets full of smooth. There's a reason he's in this film, and he's so good. And that reason is that Ryan Bingham needed to be sympathetic, not creepy.

Clooney does it, and how. He maintains interest and carries the film about a zero character on his shoulders. Clooney is a good actor, great even, and he instinctively knew what was needed to make this film coast along, and he pulls it off. Almost as if he were the Rajnikanth of independent spirit films, Clooney is the star here, and not the actor. Ably supported by a very good Anna Kendrick, and completely sexy Vera Farmiga (who can act with change to spare), the film has the acting part locked.

Thematically as well, it is interesting in these tough economic times. It's interspersed with faux interviews with people Bingham fires, and they either sell you or they don't. Despite the majestic J K Simmons, the familiar faces didn't work as well as the unfamiliar ones did for me.

Ultimately though, Up In The Air, despite the things that don't work, works. It has a topicality that it milks, but it has a heart as well. It has a zero character, but Clooney saves him. The interviews don't work, but the cast absolutely does. And finally, the screenplay doesn't work, but the direction does.

Jason Reitman can do wryly funny, and he does it with style, elegance and lots and lots of Clooney-isms. He loves his main characters, and tries very hard to make them all sympathetic. There are some great beats that he milks out of them, and priceless expressions, and I loved the way the film unfolds.

If only Ryan Bingham wasn't such a creep, it would have been a perfect film.
Share. Save. Connect.
Tweet
UP IN THE AIR SNAPSHOT

ADVERTISEMENT
This page was tagged for
Up In The Air english movie
Up In The Air reviews
release date
George Clooney, Vera Farmiga
theatres list
Follow @fullhyderabad
Follow fullhyd.com on
About Hyderabad
The Hyderabad Community
Improve fullhyd.com
More
Our Other Local Guides
Our other sites
© Copyright 1999-2009 LRR Technologies (Hyderabad), Pvt Ltd. All rights reserved. fullhyd, fullhyderabad, Welcome To The Neighbourhood are trademarks of LRR Technologies (Hyderabad) Pvt Ltd. The textual, graphic, audio and audiovisual material in this site is protected by copyright law. You may not copy, distribute, or use this material except as necessary for your personal, non-commercial use. Any trademarks are the properties of their respective owners. More on Hyderabad, India. Jobs in Hyderabad.