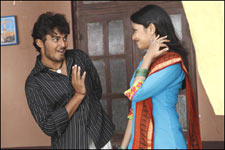 Deepa Garimella / fullhyd.com
EDITOR RATING
2.5
Performances
Script
Music/Soundtrack
Visuals
4.0
2.0
3.0
4.0
Suggestions
Can watch again
No
Good for kids
No
Good for dates
No
Wait for OTT
No
All filmmakers probably mean well, but evidently, it isn't completely possible to triumph in an industry that juxtaposes art with commerce. There are probably only the cream up there who get both the factors right, there are some who get only one of them right, and then, there are the ones who don't get either of them right. Mouna Raagam is that unfortunate production that needed much more in terms of intellect, even before the drawing board was set up.

The problem with Mouna Raagam is how starved it appears of ideas all throughout, right at the beginning. The story starts with an impoverished child Chandu sweating it out and never going to school, just so his maradalu Kaveri can get educated and get a good life. The grown-up Chandu (Tanish) thus dreams of marrying Kaveri (Suhasini) just as soon as she finishes her education.

By a twist of events that could have been completely avoided if even half a grey cell were used by any of the characters around, Sandhya (Madhurima) ends up living in Chandu's bachelor's pad for shelter for a night. She originally means to leave at day break, but since she ends up paying his troublesome landlord, she won't budge until Chandu pays her back. The two battle their mutual annoyances with each other, as well as the neighbours' taunts - the neighbours think she's Kaveri and keep hinting at their wedding bells.

Meanwhile, Kaveri walks out on Chandu because he doesn't have antastu, and gets married to someone else. Sandhya has a failed love story locked up in a flashback of her own. Sandhya tells Chandu they're on the same boat, and that they must both get back on their feet to teach the villains a lesson or two.

The pall of mediocrity that shrouds Mouna Raagam makes it impossible for it to be taken seriously. Laden with industrial levels of cliches that might have worked only when handled by skilful storytellers, this is one of those films that have only themselves to blame for their drubbing at the box office.

Chandu's ambitions of becoming a singer without even once being shown practising, Kaveri's abrupt change of character into unapologetic bitchiness, neighbourly "jokes" about pregnancies, and much much more makes you wonder who this film is going to work for.

The performances hardly hold up the film. Except for Madhurima, who is quite expressive and has striking looks as well, none of the lead cast is even close to making an impact. Tanish has problems of dialogue delivery and nuances, and sadly, styling as well.

In fact, the entire film has problems of styling - it has a dated look and uninspired cinematography. The music sounds quite generic, loud and clamourous as well. And its unfathomable what the title has anything to do with the flick.

This one is easy to be missed, and missed it won't be.
Share. Save. Connect.
Tweet
MOUNA RAAGAM SNAPSHOT

ADVERTISEMENT
This page was tagged for
Mouna Raagam telugu movie
Mouna Raagam reviews
release date
Tanish, Suhasini
theatres list
Follow @fullhyderabad
Follow fullhyd.com on
About Hyderabad
The Hyderabad Community
Improve fullhyd.com
More
Our Other Local Guides
Our other sites
© Copyright 1999-2009 LRR Technologies (Hyderabad), Pvt Ltd. All rights reserved. fullhyd, fullhyderabad, Welcome To The Neighbourhood are trademarks of LRR Technologies (Hyderabad) Pvt Ltd. The textual, graphic, audio and audiovisual material in this site is protected by copyright law. You may not copy, distribute, or use this material except as necessary for your personal, non-commercial use. Any trademarks are the properties of their respective owners. More on Hyderabad, India. Jobs in Hyderabad.