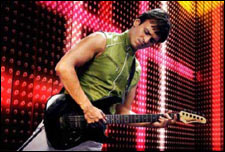 Deepa Garimella / fullhyd.com
EDITOR RATING
3.0
Performances
Script
Music/Soundtrack
Visuals
4.0
2.0
7.0
7.0
Suggestions
Can watch again
No
Good for kids
Yes
Good for dates
No
Wait for OTT
Yes
It can be tough to remember everything in life. After watching certain path-breaking scientific concepts being unleashed in Prince, however, it's tough to remember anything in life.

Prince is a brave attempt to bring the likes of not just Spiderman, Superman and Batman, but also Newton, Einstein and C V Raman to the theatres to the average Indian person. All it succeeds in is in bringing average Indian persons to the likes of theatres and making them feel as invincible as Spiderman, Superman and Batman, and as intelligent as Newton, Einstein and Raman.

The dashing high-tech robber and heist-king Prince (Vivek Oberoi) wakes up one bright morning in South Africa not remembering a thing of his past. Now the first thing someone in such a state should be thinking about is to become the CM of Jharkhand. The next thing he should be thinking about is how irresistible he is to people who want to play with his head. Neither happens, and different people tell him different versions of his flashback.

A bar dancer Maya (Neeru Bajwa) tells him she's his girlfriend and that he works for the don Saarang (Isaiah). Another, Maya (Nandana Sen), tells him she's his partner from the CBI and that he's an undercover cop out to nab Saarang. An Indian crime research branch tells him he's supposed to hand over a certain coin to Saarang. Things are starting to look pretty incoherent, but that's nothing compared to how incoherent you'll be feeling after the interval.

It turns out that the coin that everyone is in hot pursuit of houses a chip that can be used to erase some or all of your memory. And yes, it's perfectly normal for you to want to use it on yourself after hearing that.

Anyway, the chip was apparently used on Prince, but that's not the only reason he must have it back. The villains want to use it to change humanity forever. Meanwhile, Prince's real girlfriend Maya (Aruna Shields) is with him now, helping him sort out his life and get to the coin. Plenty of chases and fights later, everyone is happy, especially those who're alive.

Prince isn't an excruciating watch; it's just astonishingly low on brains. The plot was evidently meant to be part-fantasy and part-action, but those aspects end up being comic and tragic, respectively. If it's the suspense you want, however, there's enough around. All you need is an IQ shield to help you breathe when the twists and turns keep coming in.

The visuals are put together to quite an interesting effect. The stunts and chases are fun, and though some of them look computerized, there's an overall funky, snazzy feel to the whole production. The high-tempo music is a plus as well.

Wait for that chip to get invented, and then, forget about this one.
Share. Save. Connect.
Tweet
PRINCE SNAPSHOT

ADVERTISEMENT
This page was tagged for
Prince hindi movie
Prince reviews
release date
Vivek Oberoi, Neeru bajwa
theatres list
Follow @fullhyderabad
Follow fullhyd.com on
About Hyderabad
The Hyderabad Community
Improve fullhyd.com
More
Our Other Local Guides
Our other sites
© Copyright 1999-2009 LRR Technologies (Hyderabad), Pvt Ltd. All rights reserved. fullhyd, fullhyderabad, Welcome To The Neighbourhood are trademarks of LRR Technologies (Hyderabad) Pvt Ltd. The textual, graphic, audio and audiovisual material in this site is protected by copyright law. You may not copy, distribute, or use this material except as necessary for your personal, non-commercial use. Any trademarks are the properties of their respective owners. More on Hyderabad, India. Jobs in Hyderabad.