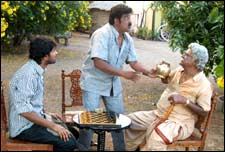 Deepa Garimella / fullhyd.com
EDITOR RATING
5.5
Performances
Script
Music/Soundtrack
Visuals
7.0
4.0
6.0
6.0
Suggestions
Can watch again
No
Good for kids
Yes
Good for dates
Yes
Wait for OTT
Yes
A whiff of clear country air raises the curtains to Allari Naresh's latest jaunt. Betting Bangarraju opens with coconut trees, paddy fields, men loafing around in multi-coloured lungis, and Allari Naresh - in short, with the promise of neutralizing some of what that unblinkingly raging summer just scorched. What you get eventually isn't exactly the most chilled out of comedies this side of global warming, but a mild something to keep you in away from the sun for a good 2 Â½ hours.

This one pretty much follows an Allari Naresh formula, to a slightly watery effect. Bangarraju (Allari Naresh), the son of a highly respected father (Giribabu), is an outright loafer in his village, and makes money by swindling people off random bets.

A couple of incidents convince Bangarraju that becoming a city slicker is the only way to land a babe. He sets out to Hyderabad and puts up with a bunch of friends (Krishna Bhagawan, etc.). There, he falls in love with Divya (Nidhi), your quintessential miss goody-two-shoes. Bangarraju's adventures in courting her, and his antics with his roommates make up the first half of the movie.

It turns out that 3 other men have already fallen in love with Divya, and what she now wants is for all of them to live at her home for a week and let her elders (Chalapathi Rao, Kota Srinivasa Rao, L B Sriram) decide whom to pick. How Bangarraju keeps getting himself shortlisted down to the end is what forms the rest of the story.

Well, this flick has its moments, but its problem is that there just aren't enough of them. The comedy is clean, suitably mindless and is executed well, but the funnies are too few and far apart. This is true even in the presence of the raucously hilarious Raghu Babu in the second half.

The disjointed script - first set in the village, then in the city and then in the heroine's home - also seems to have needed some ironing out. Then, there's the issue of too much melodrama towards the end, threatening to take away memories of those few instants of sheer thigh-slapping hilarity.

Allari Naresh carries this film on his shoulders as usual, and keeps shooting up the energy levels of even the most insipid of scenes. The heroine doesn't really need to emote, but it's pretty unnerving to watch her sport the same expression throughout the flick. Like we mentioned, Raghu Babu is a good take-away from the film, and then there are Krishna Bhagawan and Kota Srinivasa Rao to watch out for as well.

Technical values aren't snazzy or gripping, but they're enough to carry the story along. The music has been well-composed, and the romantic number Neeli Megham deserves a special mention.

Over-deliberation on this movie might just be a killjoy. Watch it without expecting a circus, and you'll get your chuckles.
Share. Save. Connect.
Tweet
BETTING BANGARRAJU SNAPSHOT

uvrvijayasaradhi on 25th Apr 2010, 8:19am | Permalink
Good movie guys. You will get your money back. Encourage this kind of movies. although there are some techical concerns, forget about them and enjoy a good healthy comedy and story. I like the last slow song in this movie. I did not like the heroine but not bad. OK. you can watch it only for Naresh. He is superb in action as well as comedy. A gifted actor to Telugu industry. Ofcourse! not a great action in this movie, but still works.
LEAVE A COMMENT
fullhyd.com has 700,000+ monthly visits. Tell Hyderabad what you feel about Betting Bangarraju!
MORE MOVIES
Latest Reviews
Don't Worry Darling
Vikram Vedha
Ponniyin Selvan - 1
Naane Varuvean
Nene Vasthunna
more
Krishna Vrinda Vihari
Saakini Daakini
Where the Crawdads Sing
Everything Everywhere All At...
Aa Ammayi Gurinchi Meeku Che...
Brahmastra: Part One - Shiva
Oke Oka Jeevitham
Brahmastra: Part One - Shiva
Ranga Ranga Vaibhavanga
First Day, First Show
Contemporary Reviews
Prince
Prince (Telugu)
Jaane Kahan Se Aayi Hai
Green Zone
Prasthanam
more
Gullu Dada Returns
Phoonk 2
Mouna Raagam
Clash Of The Titans (Telugu)
Tum Milo Toh Sahi
The Great Indian Butterfly
When In Rome
Srimathi Kalyanam
Clash Of The Titans
Random Reviews
Pearl Harbor (Telugu)
Filhaal
Original Sin
Orey Thammudu
Manmadha
more
The End of the Affair
Santa Vs The Snowman
Something Borrowed
Hugo (3D)
The Hangover 3
Vichakshana
Cinderella (2015)
Days Of Tafree
Gang (Telugu)
Taramani
SEARCH MOVIES
Dissatisfied with the results? Report a problem or error, or add a listing.
ADVERTISEMENT
SHOUTBOX!
{{todo.name}}
{{todo.date}}
[
ip{{todo.ip}}
]
{{ todo.summary }}... expand »
{{ todo.text }} « collapse
First  |  Prev  |   1   2  3  {{current_page-1}}  {{current_page}}  {{current_page+1}}  {{last_page-2}}  {{last_page-1}}  {{last_page}}   |  Next  |  Last
{{todos[0].name}}