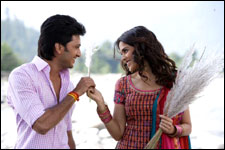 Samrat Sharma / fullhyd.com
EDITOR RATING
6.5
Performances
Script
Music/Soundtrack
Visuals
5.5
6.5
5.0
7.0
Suggestions
Can watch again
No
Good for kids
No
Good for dates
Yes
Wait for OTT
Yes
Popcorn fare is hard to make, too - it isn't easy setting a breezy, flippant tone, and it is certainly no cakewalk trying to get everything to blend together in a general tone of conviviality. Punjabi director Mandeep Kumar has his work cut out for him, given the completely varied tones the leads go for, and for the most part, he has his handle on his entertainment.

It's the very definition of a timepass film - a road movie filled with idiosyncratic characters, mischievous leads, and an accent that is supposed to make everything ever so funny. The unevenness wasn't supposed to be part of the program, neither were the utterly boring songs and a climax that, however unorthodox, takes too long coming.

When Viren (Riteish Deshmukh), an auto-rickshaw driver who has fallen in desperate times, is convinced by Mini (Genelia D'Souza) to kidnap her, the road movie begins in earnest. She makes her own ransom calls, they get bevvied, and play pranks on other people on their way to falling in love and a not-so-unpredictable twist in the tale. Won't spoil it for you, but watch the trailer closely.

In any case, Haryana has always made for amusing accents for Bollywood, and the offensiveness continues here. It's balanced by having some pivotal good-guy roles be from the state, but by and large, the film deals in stereotypes. A Caucasian guy is flipped off and told , "Simon go back", as one of many terrible attempts at humour the film makes.

This unevenness of offensive stereotypes yet breezy tone carries over to the leads. Ritesh and Genelia have terrific chemistry together, perhaps because of having started off in Hindi films together, and use that to set thew feel-good tone effectively. Yet, they go for very different methods. Ritesh is note-perfect, dialing up or down his hysterics to just the right amount to always come across as in control, while Genelia uses her extremely large eye-rolls and high-pitched voice as the staple of her arsenal, making you instinctively reach for your ears.

It's not to say they're not any good, but in a generic rom-com like this, there was no need for the both of them to employ wildly different acting methods and jar the audience.

As I write this, I remember fondly a few moments of light smiles that the film brought to me, and I guess we should be thankful for that in the age of terrible Sajid Khan comedies. If you have nothing much else going on on a lazy Sunday, you won't regret this one too much.
Share. Save. Connect.
Tweet
TERE NAAL LOVE HO... SNAPSHOT
TERE NAAL LOVE HO GAYA SNAPSHOT

ADVERTISEMENT
This page was tagged for
tere naal love ho gya hd movie
Tere Naal Love Ho Gaya hindi movie
Tere Naal Love Ho Gaya reviews
release date
Riteish Deshmukh, Genelia D\'Souza
Follow @fullhyderabad
Follow fullhyd.com on
About Hyderabad
The Hyderabad Community
Improve fullhyd.com
More
Our Other Local Guides
Our other sites
© Copyright 1999-2009 LRR Technologies (Hyderabad), Pvt Ltd. All rights reserved. fullhyd, fullhyderabad, Welcome To The Neighbourhood are trademarks of LRR Technologies (Hyderabad) Pvt Ltd. The textual, graphic, audio and audiovisual material in this site is protected by copyright law. You may not copy, distribute, or use this material except as necessary for your personal, non-commercial use. Any trademarks are the properties of their respective owners. More on Hyderabad, India. Jobs in Hyderabad.