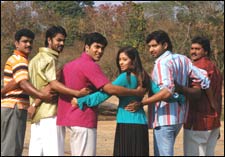 EDITOR RATING
5.0
Performances
Script
Music/Soundtrack
Visuals
NA
NA
NA
NA
Suggestions
Can watch again
NA
Good for kids
NA
Good for dates
NA
Wait for OTT
NA
Classmates is a movie featuring an alumni reunion of a Warangal arts and science UG college. Whatever picture that sentence painted in your mind is the way the movie should have been, but unfortunately is not the way it is. When you think about it, an alumni reunion seems great as a concept for a movie, but when you have to flesh out a 2-3 hour tale based on it, it’s certainly easy to run out of ideas. Classmates does – 15 minutes into the film, it is very little about an alumni reunion anymore.

It’s hard to enjoy Classmates for several reasons. Let’s start at the beginning. Literally. The beginning of this one messes up a good part of the film for you. A batch of the Government Arts & Science Degree College at Warangal that graduated 10 years back is called for a reunion by a Professor (Kota Srinivasa Rao) on the occasion of his retirement – this was the batch in which his late son Murali (Sharwanand) studied, and he wants to be with them on his last day at college to relive the last years of his son.

As the students keep trooping in to the college, most seeing their classmates after 10 years, it’s hard not to get drawn in to the scenes yourself, even if they are written to be more comic than emotional – it’s the power of the concept itself. Ravi (Sumanth), Raji (Sada), Baddu (Sunil) and Satish (Ravi Varma) are all professionals now. While Ravi and Baddu are best friends, there are rancorous dynamics between Ravi and Raji, and between Ravi and Satish, who appear like they have huge scores to settle.

After some cultural programs that evening and a dinner, Ravi is found unconscious after an attempt on his life. As he is being treated in an ICU, Baddu unravels some events in the last days of their degree course, to establish who may have made the attempt. A good part of the film hereon is in flashback mode, with how Ravi and Raji fall in love, Satish’s jealousy, and things spiralling out of control in a college election.

Anything more would spoil the movie for you, but some things already have. Since the film starts off by showing Ravi and Raji as rivals 10 years later, all through the – long – flashback, you are filled with a sense of doom for their love. It’s no fun knowing already that Satish will succeed in his attempts to split the two. 99% of movies have happy endings since people want that – they do not want to sit in films where they know that eventually it will be all tragedy. And good moviemaking is about keeping your audiences happy at least 75% of the time with what is happening on screen, and looking forward to what happens next instead of dreading it.

Then, the scene where Raji and Ravi see each other after 10 years would have been quite compelling if the history were all shown before. A powerful moment – something like SRK and Kajol meeting after several years in KKHH – gets wasted since they meet right at the beginnning, when the expressions are meaningless to you.

Then, the film turns extremely illogical with its efforts to throw in several red herrings your way. Several scenes in the beginning of the film, devised to make you think certain persons may be the murderers, look completely concocted when you start connecting the dots in the end. That is fraud moviemaking – everything should tie neatly in towards the end in a suspense film, including all red herrings.

There’s a lot more, including Ravi’s reasons for disappearing for 10 years, why he doesn’t just explain things to Raji during the elections before the shit hits the ceiling etc. And oh yes, what was Maxim magazine doing 10 years back?

All the performances are good, though Kamalinee Mukherjee appears wasted. The film has just 3 songs, with Gunde Chatuga being approximately melodious. This is a rather low-budget effort, so there’s not much in terms of imagery. Also, the film tries to glorify student politics in government colleges, something several audiences may not care for.

Finally, whether you would really enjoy an alumni reunion movie depends on what the nature of your own college life was. Unlike what the movies, that always glorify college life, would have us believe, the majority of students in any batch never really make too many friends or gain confidence in the classroom setting. A lucky few accept themselves or never really aim to be happening, and the rest stay depressed at not being popular like the college heroes in the movies always seem to be.

For several of these people, then, alumni reunions really hold nothing, and movies or newspaper articles making it look like college days are the best days of one’s life only dig up the old wounds – you need to be extremely successful in your career then to carry self-worth into an alumni get-together, since success and adulation rubbish the past like nothing else does.

Classmates is a movie with a good concept – a poor script lets it down. It’s however still worth a watch for whatever it delivers.
Share. Save. Connect.
Tweet
CLASSMATES SNAPSHOT

ADVERTISEMENT
This page was tagged for
https://www.classmatesreview.com
classmates telugu movie review
Classmates telugu movie
Classmates reviews
release date
Follow @fullhyderabad
Follow fullhyd.com on
About Hyderabad
The Hyderabad Community
Improve fullhyd.com
More
Our Other Local Guides
Our other sites
© Copyright 1999-2009 LRR Technologies (Hyderabad), Pvt Ltd. All rights reserved. fullhyd, fullhyderabad, Welcome To The Neighbourhood are trademarks of LRR Technologies (Hyderabad) Pvt Ltd. The textual, graphic, audio and audiovisual material in this site is protected by copyright law. You may not copy, distribute, or use this material except as necessary for your personal, non-commercial use. Any trademarks are the properties of their respective owners. More on Hyderabad, India. Jobs in Hyderabad.