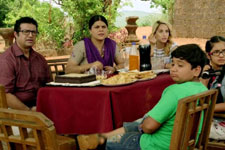 Nupur Barua / fullhyd.com
EDITOR RATING
5.0
Performances
Script
Music/Soundtrack
Visuals
7.0
5.0
5.0
6.0
Suggestions
Can watch again
No
Good for kids
No
Good for dates
Yes
Wait for OTT
No
It is never easy being a part of a large family. There are just too many eccentricities to handle. And this is what debuting director Ritesh Menon decided to take up as the subject of his film Crazy Cukkad Family. It is a movie that will be remembered for a while for the crazy characters that flit in and out of the story, and also for the bizarre situation that they all find themselves in.

The senior Mr. Beri (Yusuf Hussain), whose estate is large enough to have its own pin code, slips into his third coma. He is on his deathbed, and it is time for his children to come home and figure out a few things. Of course, the curiosity about whom he has left his wealth to is a chief factor in the prompt arrival of all the children, who live in different countries, and do not really have a great attachment with each other.

And so they arrive - Pawan (Swanand Kirkire), Archana (Shilpa Shukla), Aman (Kushal Punjabi) and Abhay (Siddharth Sharma). Each of them has his or her reason for wanting a large piece of their father's wealth - one has to repay a criminal, one wants to fulfil an adolescent dream, one wants to settle abroad and one wants a sex change operation. Despite their problems, the siblings insist on pretending that all is right with their respective worlds, especially in front of each other.

Mr. Beri has only one condition to the reading of his will, according to his trusted lawyer - all his children have to be married before his wealth is distributed amongst them. He is still alive, of course, just not conscious. A series of events, in which the siblings try to keep up appearances, lead to the revelation of many secrets and hidden agendas. Their spouses, in the meantime, have to play along, too, and this leads to pandemonium, as their secrets, too, get exposed. In the meantime, will Mr. Beri die this time? Will his children even care? And will they reconnect genuinely via this forced reunion?

Unfortunately, despite the director's sincerest attempts, Crazy Cukkad Family reeks of amateurishness. It does not lack much - there are a plot, many sub-plots and a graph in the narration, and plenty of distractions to make your viewing worthwhile. However, there is a problem with the structure. There are just too many things happening, and most of the film seems convoluted, especially the quirkiness of the characters.

What the film does not lack is humour. Most of the dialogues, forced or otherwise, are guaranteed to make you smile, at the very least. The relationship between the siblings is conveyed naturally, without too much manipulation in the script. And, surprisingly, despite a homosexual angle, there are no homophobic jokes. The first half of the movie is more interesting, but the second half loses direction. It shilly-shallies into inane resolutions and climaxes, and makes you lose interest in the fate of the characters that you invested in so heavily in the first half. The narrator, whose voiceover you hear in spurts, is not very helpful, either.

Swanand Kirkire is the star of the film. This is his debut as an actor, but you could be fooled into believing that he has been doing this for years. He is one of two actors whom you cannot get tired of looking at in this movie. The other is Shilpa Shukla. She becomes the dominating wife and quarrelsome sister with such élan that you forget that she is acting. Kushal Punjabi and Siddharth Sharma are decent, and the rest of the cast pitch in their talent well. The casting for this movie is perfect.

An estate that requires its own pin code is a surreal idea, and that is exactly what the production design is - surreal. And that is why most of the goings-on in the film seem unrealistic. As do the costumes. The camera work is average, as is the music. The editing though is crisp enough to retain your interest, despite the erratic storytelling.

Crazy Cukkad Family is fun, but requires patience. If you are tolerant of winding screenplays and some forced humour, you should catch this one. Ritesh Menon is definitely a name to look out for in the future. We just hope his next is a step up from this movie.
Share. Save. Connect.
Tweet
CRAZY CUKKAD FAMLILY SNAPSHOT 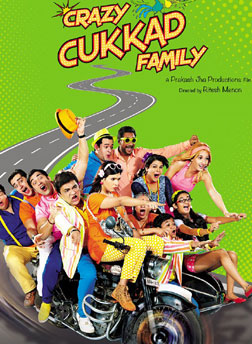 ADVERTISEMENT
This page was tagged for
Crazy Cukkad Famlily hindi movie
Crazy Cukkad Famlily reviews
release date
Swanand Kirkire, Shilpa Shukla
theatres list
Follow @fullhyderabad
Follow fullhyd.com on
About Hyderabad
The Hyderabad Community
Improve fullhyd.com
More
Our Other Local Guides
Our other sites
© Copyright 1999-2009 LRR Technologies (Hyderabad), Pvt Ltd. All rights reserved. fullhyd, fullhyderabad, Welcome To The Neighbourhood are trademarks of LRR Technologies (Hyderabad) Pvt Ltd. The textual, graphic, audio and audiovisual material in this site is protected by copyright law. You may not copy, distribute, or use this material except as necessary for your personal, non-commercial use. Any trademarks are the properties of their respective owners. More on Hyderabad, India. Jobs in Hyderabad.