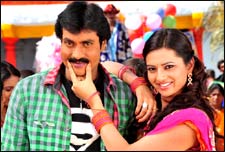 Deepa Garimella / fullhyd.com
EDITOR RATING
6.0
Performances
Script
Music/Soundtrack
Visuals
7.5
5.0
6.5
6.0
Suggestions
Can watch again
No
Good for kids
No
Good for dates
Yes
Wait for OTT
Yes
Yes, Poolarangadu does feature Sunil's much-hyped (and suspiciously extra-bronzed) 6-pack abs. And no, they are not the star of this film (having been relegated to a thundering 5-minute fight in the climax), thus leaving the stage free for Sunil to come and do his "hero" thing.

Poolarangadu carefully treads the line between an all-out comedy (on the lines of an Allari Naresh film) and a mass commercial entertainer, and Sunil makes the most of everything that is offered to him.

He plays Ranga, an ordinary bloke who is notorious for borrowing money from people and never returning it them. One day, someone cheats him into a land deal, and he discovers that he's stuck between two dangerous warlords, Lala Goud (Pradeep Rawat) and Konda Reddy (Dev Gill).

In the first half of Poolarangadu, we're treated to much slapstick comedy, by way of Ranga's antics and those of his friends (Ali, Satyam Rajesh), and his misadventures with the warring leaders. Ranga gets unwittingly drawn into being employed by Konda Reddy as a trusted henchman, and meanwhile, he must also please Lala Goud, whose daughter (Isha Chawla) gets drawn to him.

Post-interval, the movie gets into the standard-issue entertainment formula, with a heinous villain (Konda Reddy), lots of sentiment, some romance, and in the end, lots of slow-motion gore.

Overall, this is a pretty clean, fun watch. While the film itself has a highly predictable plot, and is hardly memorable, Sunil's enthusiasm is palpable. He still doesn't have the fire in him to be a full-fledged star, but fortunately, this role is designed just so he can carry the movie on his shoulders. Poolarangadu doesn't have a "hero" in the true sense of word, since the protagonist doesn't show any machismo. Ranga remains the underdog who gets caught in life-threatening situations for no fault of his, and who you root for.

Sunil's style of humour is something we're all used to, and apart from comedy, he also gets to dance a lot, and fights a bit. In addition, he is also made to wear a scared/shocked look for a large part of the movie.

The comedy mostly comes in short bits, and there are also a few lengthened sequences that are well-done, like the one with Satyam Rajesh's character having to deal with a permanently twisted neck, and the scene with Telangana Shakuntala. The villain is the other anchor of Poolarangadu, having been made evil enough to warrant the final face-off in which justice gets done.

Ali, Satyam Rajesh, Raghu Babu and a few others all have their moments. Dev Gill is menacing, but the dubbing kills it. Kota Srinivasa Rao is given very little to do, and Pradeep Rawat towers in his scenes.

Anoo Rubens' songs are quite foot-tapping, and Sunil's dances continue to impress. The visuals are passable.

Sunil might well be on his way to creating a brand for himself, and so far, he's had a decent start. Watch Poolarangadu for a no-fuss round of laughs, and if you don't insist on intellectual fare.
Share. Save. Connect.
Tweet
POOLA RANGADU SNAPSHOT 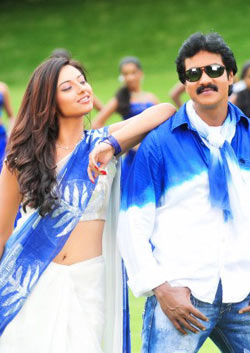 ADVERTISEMENT
This page was tagged for
Poola Rangadu Telugu movies
paul rangadu cinema movie
Poola Rangadu telugu movie
Poola Rangadu reviews
release date
Follow @fullhyderabad
Follow fullhyd.com on
About Hyderabad
The Hyderabad Community
Improve fullhyd.com
More
Our Other Local Guides
Our other sites
© Copyright 1999-2009 LRR Technologies (Hyderabad), Pvt Ltd. All rights reserved. fullhyd, fullhyderabad, Welcome To The Neighbourhood are trademarks of LRR Technologies (Hyderabad) Pvt Ltd. The textual, graphic, audio and audiovisual material in this site is protected by copyright law. You may not copy, distribute, or use this material except as necessary for your personal, non-commercial use. Any trademarks are the properties of their respective owners. More on Hyderabad, India. Jobs in Hyderabad.