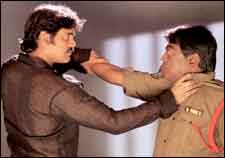 EDITOR RATING
7.0
Performances
Script
Music/Soundtrack
Visuals
NA
NA
NA
NA
Suggestions
Can watch again
NA
Good for kids
NA
Good for dates
NA
Wait to rent it
NA
In several ways, Mass is analogous to a chase scene in the movie itself, where Nagarjuna is revving away to escape the bad guys chasing him at full throttle, getting you all wound-up to see how he wins. He then just jumps into a lake, bringing the whole kinetic energy sequence to an anti-climactic denouement. The villains are confused into thinking that he's dead. He's not, however. Likewise, Mass. It survives a mid-movie misjudgment that could've killed it, to ultimately emerge watchable.

Mass (Nagarjuna) is named that way since after that things can only look up in life. The prequel to this movie, which released in 1981 under the name "Superman", shows how he becomes a superhero. This movie takes off from there with opening scenes of the guy beating up a mob of about 15 well-built goons single-handedly. But you like it, since the script indeed is made for the masses. You want him to beat up the jackasses - any bunch of 15 guys who, sporting weapons of mass destruction, cannot beat to pulp an ordinary-looking unarmed man, deserve to be beaten up.

Still, nobody ever grudged a movie hero for beating the bad guys up, and the film manages to keep the blood gushing in your veins all through the first half. Mass is in Vizag to take on the gang of Satya (Raghuvaran) and his son Seshu (Rahul Dev), who terrorize Vizag since they don't know that the movie has a hero who will eventually kill them for it. If you want to know more genuine reasons than this, you'll have to sit through 45 minutes in the second half of the film that seem like they are 450 minutes.

Mass challenges Seshu that he will destroy his empire systematically in 20 days, and gives the roadmap in Excel format, too. It's fun, this half, with good narrative pace and leg-grabbing sequence flow. Since it's a good idea to have a heroine in both halves of the movie, and since the script-generated heroine doesn't enter until in the second half, the movie has a substitute lead-woman (Charmy) for this part, who Mass sings duets with without technically committing to a long-term relationship.

The second half gives you Mass' flashback - like, how he got named Mass, how he thinks it's a perfectly normal name to have, and his short-term and long-term outlook for people with that name. It also tells you how he falls in love with Satya's daughter Anjali (Jyotika), and how his best friend Adi (Suneel) gets killed when resisting Seshu's hauling Anjali away for trying to marry without the family's consent.

Helmer Raghava Lawrence's marching orders must have been to include all the normal Telugu movie masala in this flick, probably against his own better judgment. The first half builds up a lot of tempo and anticipation, and there is so much potential for a brilliant game of strategy between the predator and the quarry, something that the audience is clawing for as the first half ends. Instead, for well over half an hour, you have a completely unimaginative tale of courtship that almost destroys all hope of this getting back. It's like stopping a 120kmph drive on your bike to take a call on your mobile, having to call the person back from a booth due to poor reception, and discovering it's a wrong number.

Fortunately, the film returns to the main theme with some time still left. The game continues, with the bad guys too starting to use their brains now. They figure out who Mass is in a tête-à-tête with a criminal lawyer Durga Prasad (Prakash Raj), wreak havoc at the complex he stays, and brutally railroad all his supporters to their HQ. The piéce de resistance, for people who haven't seen too much of Hollywood in their lives, is how Mass rescues them all in a simple stroke of bloodless genius.

Nagarjuna stays in good shape, considering his contemporary bracket. He has picked up some good dancing steps, too. Only, he speaks too much for this character. Powerful dialogues are not his forte, and his character, at least the second avatar, could have been more understated. Intelligent dialogue-writers are sometimes more important than the script itself, especially to a "mass" movie like this - there are several times when the film is high-handed in all the areas it should be subtle.

It also has some completely unnecessary raunchiness in songs and lyrics. The title song is good, but some other songs are simply out-of-place, if even needed. Especially in the second half, when you want the damn story to go ahead.

On the whole, a watchable film, though, for all those who are willing to let a movie be a movie.
Share. Save. Connect.
Tweet
MASS - DAMMUNTE KASKO SNAPSHOT

ADVERTISEMENT
This page was tagged for
mass damunte kasko telugu songs
Mass - Dammunte Kasko telugu movie
Mass - Dammunte Kasko reviews
release date
Nagarjuna, Jyotika
Follow @fullhyderabad
Follow fullhyd.com on
About Hyderabad
The Hyderabad Community
Improve fullhyd.com
More
Our Other Local Guides
Our other sites
© Copyright 1999-2009 LRR Technologies (Hyderabad), Pvt Ltd. All rights reserved. fullhyd, fullhyderabad, Welcome To The Neighbourhood are trademarks of LRR Technologies (Hyderabad) Pvt Ltd. The textual, graphic, audio and audiovisual material in this site is protected by copyright law. You may not copy, distribute, or use this material except as necessary for your personal, non-commercial use. Any trademarks are the properties of their respective owners. More on Hyderabad, India. Jobs in Hyderabad.