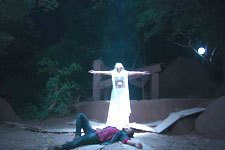 T J Reddy / fullhyd.com
EDITOR RATING
4.0
Performances
Script
Music/Soundtrack
Visuals
5.0
4.0
2.0
4.0
Suggestions
Can watch again
No
Good for kids
Yes
Good for dates
No
Wait for OTT
Yes
If movies have taught us anything, it is that love conquers all. Also, love is the strongest emotion and love is the hootie-mac of your world and many more lines of the ilk. We have seen the power of love unite families in Kalisundam Raa, bring people back from the sweet embrace of the afterlife (after minutes of being dead) in Gangotri, cure people of their OCD in Mahanubhavudu and drive best friends to a murderous rage in Shambho Shiva Shambho.

Yes, boys and girls, love can do a lot more things than we tend to give it credit for. While I'm reminded of this in every second movie I watch, little did I know that the power of love can aid you in going toe-to-toe in a literal fist-fight with Garuda. Yes, that Garuda who functions as Lord Vishnu's version of a Royal Enfield.

Once my eyes were subject to this unfathomable, earth-shattering event (why is this not the film's selling point?) that I struggle to adequately describe in words, I found myself asking the same questions V did in V For Vendetta. How did this happen? Who is to blame? Well, there are some who are more responsible than others, and here we hold them responsible for their actions.

Our primary suspect is writer/director "Baahubali" Palani. His fantasy romance follows the lives of small-time crook Nani (Naga Anvesh) and his friend Giri (Saptagiri) as they attempt to illegally transport a statue from Amaravathi to Hyderabad. They get stranded in a forest trying to evade the chasing cops, and lose the statue in the night to boot.

However, the statue has actually transformed into Nakshatra (Hebah Patel), the daughter of Lord Vishnu who has been cursed to live out her days as a statue until she hears words of praise about her beauty (because apparently heavenly beings need objectification, too), which Nani gratuitously offers in a drunken stupor in the night. She hitches a ride from them in the morning, and the movie stays light-hearted for a good while as the trio zip along the highway and stay in a rooftop shed. And Nani and Nakshatra inevitably fall in love over some ill-placed political humour.

However the euphoria doesn't last too long, as Nakshatra's father, observing that she's enjoying her life on Earth a bit too much, sends an, um, specially-abled being to bring her back to heaven. The duo also quickly finds themselves on the run from the goons of Harish Bhai (Sayaji Shinde). And to add to it all, a missing person poster appears with Nakshatra's face on it, confusing Nani, who Nakshatra has by now disclosed her real identity to, about just who this person actually is.

The movie chooses to play the emotional card thereon. Nakshatra apparently found the plight of a 20-lakh loan repayment quite moving, and chose to come to Earth to help. What about all the famines, poverty, wars, racism and genocides, you might wonder. Hey, we never said this was an intelligent film.

For example, Nakshatra is perhaps the only celestial being in movie history with no special powers, which begs the question - why did she need to be a goddess to begin with? But wait, if she wasn't a goddess, the fist fight with Garuda would have to be scrapped, and we can't do that because it's cool, right? This kind of thought which puts ends before means is what cripples the film. The movie also eliminates important lines of expository dialogue, which results in the connections between scenes not being clear many times.

Naga Anvesh joins a long list of very green young men who are thrust into lead roles, and is woefully exposed when sharing scenes with his counterpart and comic relief Saptagiri. Hebah Patel is easily the best part of the movie, with a charming presence on screen and quite easy on the eye. While the young trio of main characters have little to offer in terms of range owing to the script playing for beats instead of genuine character growth, veteran actors Sayaji Shinde and Pradeep Rawat spend an inordinate amount of time being inept at their respective professions which robs them of being in any way crucial to the plot. And anyone who remembers Priyadarshi's role in this film after a week gets eclairs from me.

The overall poor presentation of the film adds to the clumsy dialogues and direction. The movie introduces Nakshatra with her doing a discount version of the Enchantress' hula-hoop to EDM while being stranded in a forest with a street lamp, and it's all downhill from here. The film wears its shoddy CGI, overt product placement and a score as inconsistent as the film's tone itself, as badges of honour.

And that is why you can't really despise this movie altogether. It is unaware of its own shortcomings, and the earnest way it goes about its work while convinced that its story is one worth being told is cute, to say the very least. Watching its final 10 minutes had me rolling in laughter more than any comedy has in recent memory. It is a shame that the entire preceding part is just plain bad instead of being so bad it's good.
Share. Save. Connect.
Tweet
ANGEL SNAPSHOT 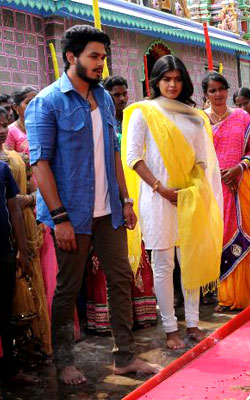 ADVERTISEMENT
This page was tagged for
Angel telugu movie
Angel reviews
release date
Hebah Patel, Naga Anvesh
theatres list
Follow @fullhyderabad
Follow fullhyd.com on
About Hyderabad
The Hyderabad Community
Improve fullhyd.com
More
Our Other Local Guides
Our other sites
© Copyright 1999-2009 LRR Technologies (Hyderabad), Pvt Ltd. All rights reserved. fullhyd, fullhyderabad, Welcome To The Neighbourhood are trademarks of LRR Technologies (Hyderabad) Pvt Ltd. The textual, graphic, audio and audiovisual material in this site is protected by copyright law. You may not copy, distribute, or use this material except as necessary for your personal, non-commercial use. Any trademarks are the properties of their respective owners. More on Hyderabad, India. Jobs in Hyderabad.