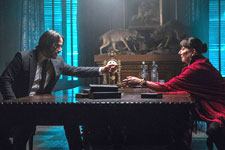 T J Reddy / fullhyd.com
EDITOR RATING
7.5
Performances
Script
Music/Soundtrack
Visuals
8.0
6.0
6.0
8.0
Suggestions
Can watch again
Yes
Good for kids
No
Good for dates
Yes
Wait to rent it
No
John Wick walks into a cold, dark room. His hair covers his cheeks but is in no way interposing his view. His eyes elegantly move from side to side, scoping the room out with the precision of a hawk. Populating it are other action films that bring disrepute to his brand of cinema. The other films rise up off their seats, armed with their incompetent filmmaking techniques. John brandishes his gun. Two hours and ten minutes later, he has reached the other end of the room - warm blood splattered across his bespoke black suit. He darts a glance and sees carnage in his wake. Ever so calm, he reloads his weapon. Closes the door. And walks away into the night. His mission accomplished.

While Mr Wick eliminating his enemies with the ease of a lion hunting down an unsuspecting gazelle was never in doubt, we are here to slow the footage down and to extrapolate on the nitty-gritty of his process. An action replay of a bazillion headshots, if you will.

Let's begin with how John Wick (Keanu Reeves) found himself in this predicament. He was a retired hitman that was living his days mourning his wife and caring for his dog. When someone stole his car and murdered his dog, he came out of retirement and killed nearly a hundred people in a quest for revenge. Soon after, he was coerced into doing one last hit to fulfil an old blood oath. In the process of fulfilling said oath, Wick found himself killing a person on a pre-determined neutral ground. As punishment for his actions, Wick was excommunicated from his organization and now has a $14 million bounty on his head. With every assassin across the city on his tail, John finds himself fighting his way out of a proverbial hall filled only with corners.

That is the story of how our leading man went bezerker on all those dudes and killed them dead. But what we are here to find is how the film our hero is in killed all those other, lesser films on its way to being awesome.

A mind that achieves its targets is a focused mind. A focused mind is the result of a simplified goal and a clear path to achieving said goal. While most other action films fashion themselves as complicated narratives scattered with complex characters in an effort to mask their inadequacies in the action department, the John Wick series is filled to the brim with easily relatable characters with simple motivations simply because the focus of the film is its spectacularly choreographed action sequences and mesmerizing stunt work.

The stunt work is mesmerizing simply because of how expertly each set piece is crafted. Starting from the first sequence which involves John using a book as his weapon of choice, no two set pieces are the same. With every change in setting, the weapons, tactics and damage John, his cohorts and his adversaries take is unique to itself and always filled with long, wide shots of the stunt team and actors working in tandem to make their fights equal parts brutal and beautiful.

But all is not a hailstorm of bullets and monsoons of blood in the land of Wick because a hero is only as good as the odds he/she overcomes. And therein lies the problem with the movie. With the "bad guys" being a horde of assassins who function as nothing more than capable cannon fodder, the film loses its electric pace every time it introduces us to one such character and his/her crew. While the movie never recycles an action sequence, it does recycle character stereotypes with every new "boss" who makes his/her way into the narrative. There are the prim and proper boss, the "proficient in history" boss, the elusive boss, the "you and I are the same" boss and so forth. The film describes them as callously as we just did, and that brings some much-needed levity to the proceedings, but a bullet to the body hurts even if one chooses to laugh it off post-removal.

Then again, the character, like the film he is in, makes errors in judgement, and that is what humanises him to the delight of the viewing public. Keanu Reeves' character paying a price for every one of his bad decisions makes his escaping the impossible all the more satisfying. With a steady camera capturing his every up and down in a style eerily reminiscent of Asian action cinema, the movie visually sets itself apart from many of its counterparts, and the techniques it implements help it stand over the broken bones and mangled corpses of those lesser cinematic endeavours, with a calculating score and immaculate sound design playing in the background. The film is aided by a game Halle Berry, an imposing Laurence Fishburne and the returning cast of colourful characters who add little dashes of personality to the product.

"Life is poor, nasty, brutish and short," Thomas Hobbes once said. The John Wick franchise never argues with that observation. It merely shows us the beauty in the brutality, the comedy in tragedy and never-ending pleasure in watching lives being shortened by the man who wears the black suit.
Share. Save. Connect.
Tweet
JOHN WICK CHAPTER 3... SNAPSHOT
JOHN WICK CHAPTER 3 - PARABELLUM SNAPSHOT 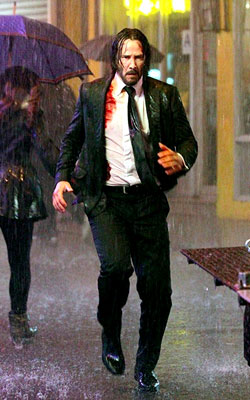 ADVERTISEMENT
This page was tagged for
John Wick Chapter 3 - Parabellum english movie
John Wick Chapter 3 - Parabellum reviews
release date
Keanu Reeves, Halle Berry
theatres list
Follow @fullhyderabad
Follow fullhyd.com on
About Hyderabad
The Hyderabad Community
Improve fullhyd.com
More
Our Other Local Guides
Our other sites
© Copyright 1999-2009 LRR Technologies (Hyderabad), Pvt Ltd. All rights reserved. fullhyd, fullhyderabad, Welcome To The Neighbourhood are trademarks of LRR Technologies (Hyderabad) Pvt Ltd. The textual, graphic, audio and audiovisual material in this site is protected by copyright law. You may not copy, distribute, or use this material except as necessary for your personal, non-commercial use. Any trademarks are the properties of their respective owners. More on Hyderabad, India. Jobs in Hyderabad.