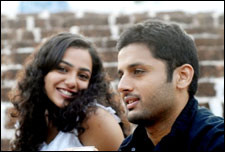 Deepa Garimella / fullhyd.com
EDITOR RATING
7.0
Performances
Script
Music/Soundtrack
Visuals
7.0
6.5
7.0
9.0
Suggestions
Can watch again
No
Good for kids
No
Good for dates
Yes
Wait for OTT
No
Ishq is a rom-com quite different from what one would dub run-of-the-mill, with director Vikram Kumar choosing to let actions and expressions speak louder than words. It is a likeable movie despite Nithya Menen's increasingly un-Telugu Telugu and Nitin's un-heroic heroics, and strangely enough, part of the film's charm lies in how close to real life these actors look and feel.

Helped enormously by P C Sriram's brilliant cinematography - with wide angles, sepia tones in parts, and a generally slick look and feel - and a background score that is both grandiose and breezy, the movie works in portraying a rather simple love story.

Priya (Menen) and Rahul (Nitin) fall in love on a journey from Delhi to Hyderabad, and this takes a good hour and a half. There is a finesse in the way the romance is made to brew, with a glance here, a half smile there, and plenty of both together.

It is then that the story takes a twist, and a certain under-used actor called Ajay takes centre-stage, as he plays a character called Siva. Ishq, once again, proves how Ajay can be quite a force if only he has the right director and the right frame. The second half is all about Rahul having to manipulate - both in ways that are clever and tricks that are far-fetched. Some of this is a treat to watch, with the writers sprinkling neat little twists that delight.

Ishq has quite a well-tried theme - what is not different about it is how it strongly focuses on the lead pair's romance for half the film and then moves on to a totally different dynamic between the hero and one other person. However, what Vikram Kumar brings to the table is a certain finesse in the way he handles these relationships, and the subtleties that he takes care of.

There is more script and acting than dialogue here, although Nitin gets to mouth a few filmi lines at times. The film also does get a little tiresome in parts, and the coincidences are too convenient. Plus, a liberal usage of beeped words. It's too long, on the whole, and a few of the songs test your patience.

The lead pair share good chemistry, and Nitin can take a bow for finally starring in a film much better than the rut of B-grade-ness that he has recenty been through. Ishq lets him comfortably be himself, and flawed though his acting is, his looks seem to work with the young women.

Nithya Menen is attractive in an earthy sort of way, and she's also styled well here (as is everyone else in the cast). Her acting skills bring a whole new quality to the scenes she's in - watch her especially in the airline sequence, where Rahul is hitting on Priya.

The support cast - Nagineedu, Sudeep, Satya Krishna, Sindhu Tolani and Srinivas Reddy - all have tiny but pretty meaningful presences. Ali makes a rather refreshing entry. Rohini does the same thing she does in Ala Modalaindi, and her tendency to go over-the-top still exists.

As we mentioned, the movie has a strong sense of aesthetics, and this makes it a pleasure to watch. 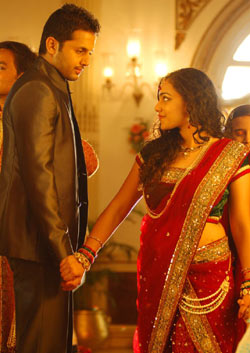 ADVERTISEMENT
This page was tagged for
Ishq (Telugu) telugu movie
Ishq (Telugu) reviews
release date
Nitin, Nithya Menen
theatres list
Follow @fullhyderabad
Follow fullhyd.com on
About Hyderabad
The Hyderabad Community
Improve fullhyd.com
More
Our Other Local Guides
Our other sites
© Copyright 1999-2009 LRR Technologies (Hyderabad), Pvt Ltd. All rights reserved. fullhyd, fullhyderabad, Welcome To The Neighbourhood are trademarks of LRR Technologies (Hyderabad) Pvt Ltd. The textual, graphic, audio and audiovisual material in this site is protected by copyright law. You may not copy, distribute, or use this material except as necessary for your personal, non-commercial use. Any trademarks are the properties of their respective owners. More on Hyderabad, India. Jobs in Hyderabad.