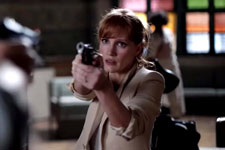 Punarvasu Pendse / fullhyd.com
EDITOR RATING
4.0
Performances
Script
Music/Soundtrack
Visuals
6.0
3.0
4.0
4.0
Suggestions
Can watch again
No
Good for kids
No
Good for dates
No
Wait for OTT
Yes
The title of this movie is derived from the codename of Agent 355, during the American Revolution. The characters in the film form a faction called The 355, paying homage to the original agent, a mysterious female spy whose identity remained a secret - the number 355 being code from the Culper Ring system for "lady".

Producer and lead actress Jessica Chastain first conceptualised The 355 while working with then debutant director Simon Kiberg on X-Men: Dark Phoenix, and the director's follow-up movie is an equally tepid, if not worse, affair.

Influential criminal Elijah Clarke (Jason Flemyng) double-crosses a Colombian drug lord to help himself to a special computer program that can hack into pretty much any electronic device on the planet - but is driven out when DNI (National Intelligence Directorate, Colombia's intelligence agency) agents raid the complex.

The big scramble for the drive drives agents Mason "Mace" Brown (Jessica Chastain) and her partner Nick Fowler (Sebastian Stan) from the American CIA, and agent Marie Schmidt (Diane Kruger) from the German BND (Bundesnachrichtendienst, or the Federal Intelligence Service) to outmaneuvre each other. But the best laid plans go awry, and Mace has to enlist the help of her ex-colleague Khadijah Adiyeme (Lupita Nyong'o) of the British MI6 along with reluctant DNI psychologist Graciela Rivera (Penélope Cruz) to save the day.

In 2019, an observation was made by yours truly while reviewing The Hustle, that we are conditioned to expect more from films having an all-female star cast - and that it was okay for women to star in mediocre fare the same way a lot of male actors do without being lambasted for simply doing such movies. It should be noted that The Hustle, however, was a remake of Dirty Rotten Scoundrels, while The 355 is meant to be an original concept - that falls woefully short on the "original" aspect.

The 355 is a clichéd, textbook spy thriller whose "twists" are visible from a mile away. The concept is great (a story on the original agent 355 would be intriguing - here's the next big movie idea, studio, you're welcome) but the final product is extremely unremarkable. The big MacGuffin is a drive that can access any network or device in the world - it can launch missiles, tank stock markets, or crash airplanes in a few keystrokes - is meant to be terrifying, but feels so uninspiring.

There is an attempt made to portray these agents as women with lives outside their jobs, which is perhaps the one good thing we can say about the script, but it doesn't flesh out any of the lead characters particularly convincingly. Then, enthralling action sequences are the backbone of this genre, and The 355 drops the ball in this department as well - unsteady camerawork and liberal usage of jump cuts make the supposedly elaborate fights and chase sequences feel unsatisfying.

The dialogue is off-putting, too, with lines such as "...George Washington's first female spy during the revolution. They called her The 355 because they didn't want the world to know her name" (as opposed to other spies whose names are well-known, mind you) or "you're the best in the world at what you do" (what is it, exactly, pray tell us - or better, show us) or "we need to join forces" ("show, don't tell" be damned). What we get, at the end, is a generic action thriller whose script completely wastes the talents of its fantastic cast.

The cast, for their part, try to do their best with what they've been given - but they don't play off each other, and their chemistry somehow seems to have crests and troughs. Jessica Chastain and Sebastian Stan, both excellent actors by themselves, do not work as a couple at all. Fan Bingbing's character Lin MI Sheng feels like a late addition to the script rather than an organic part of it. Penélope Cruz feels under-utilised, and Diane Kruger seems to play a very textbook "strong" character.

Tom Holkenberg's score is percussion-heavy and often overwhelming, and at times ruins what could have been a genuine bonding moment between the lead characters with its loudness.

Frankly, we get why this idea would have inspired Chastain to begin with - a power fantasy that also explores these powerful women outside their work life, and to see women overcoming obstacles in a male-dominated profession, a profession that is dangerous enough in itself without external pressure. There is a historical precedent, too - women have been recruited as spies for as long as there has been conflict because women have been able to sneak into everyday life with less suspicion.

What we get, however, is standard and formulaic - it even has a framework of sorts that would allow for sequels. With a better script, and maybe with some comic relief instead of unconvincing seriousness, this could have been something. We'd recommend (and especially in these trying times) staying home - you're not missing out.
Share. Save. Connect.
Tweet
THE 355 SNAPSHOT 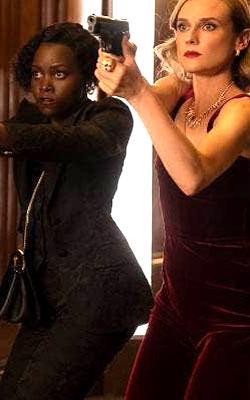 ADVERTISEMENT
This page was tagged for
The 355 english movie
The 355 reviews
release date
Jessica Chastain, Penélope Cruz
theatres list
Follow @fullhyderabad
Follow fullhyd.com on
About Hyderabad
The Hyderabad Community
Improve fullhyd.com
More
Our Other Local Guides
Our other sites
© Copyright 1999-2009 LRR Technologies (Hyderabad), Pvt Ltd. All rights reserved. fullhyd, fullhyderabad, Welcome To The Neighbourhood are trademarks of LRR Technologies (Hyderabad) Pvt Ltd. The textual, graphic, audio and audiovisual material in this site is protected by copyright law. You may not copy, distribute, or use this material except as necessary for your personal, non-commercial use. Any trademarks are the properties of their respective owners. More on Hyderabad, India. Jobs in Hyderabad.