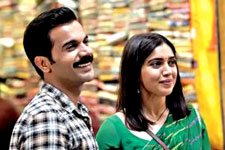 Punarvasu Pendse / fullhyd.com
EDITOR RATING
6.0
Performances
Script
Music/Soundtrack
Visuals
8.0
6.0
3.5
6.0
Suggestions
Can watch again
Yes
Good for kids
Yes
Good for dates
Yes
Wait for OTT
No
The very first movie reviewed by yours truly, in 2019 , was a relatively new concept in mainstream Hindi cinema, and it explored a social issue - same-sex relationships - in a manner that would appeal to the masses. Rajkummar Rao played the role of a guy in a relationship with a lesbian woman, becoming an ally in the process.

"Mainstream entertainer with a message" has somewhat become a film genre by itself by 2022, with films based on issues ranging from the treatment of transgender people to male pattern baldness releasing in the past few years. And we're not as enthusiastic about seeing Rajkummar Rao play the role of the guy in a relationship with a lesbian woman again (albeit with a twist this time around).

Director Harshavardhan Kulkarni deals with the theme of sexuality once again after in his debut film, but it is not an all-out sex comedy this time around. Badhaai Ho still has comedy in its sights, but the tone is more dramatic than humorous.

Policeman Shardul Thakur (Rajkummar Rao) and PE teacher Suman Singh (Bhumi Pednekar) enter a marriage of convenience (termed lavender marriage) in order to keep their sexual orientations hidden from their family and society. The duo toil hard to keep this compromise working, but the introduction of Rimjhim (Chum Darang) into the mix makes it harder to keep up appearances. With two traditional families eagerly awaiting children from the couple, various entanglements ensue.

Badhaai Do has a simple message - treat people of all orientations kindly. The tone of the film is sympathetic and hopeful, but the most important part is that it doesn't offer a be-all and end-all solution to the problems faced by the queer community - quite simply because there isn't one. Neither marriage nor adoption are an option for same-sex couples in India even in 2022, and the film shines a light on these issues without sermonising or being overbearing. It adds homosexual people to the familiar small-town family dynamics, and illustrates how difficult it is for them to come out of the closet even to their own parents.

The film, despite the positivity, unfortunately still employs harmful tropes - such as same-sex relationships being called perversions or diseases. Badhaai Ho also tends to drag along, and could have done with tighter editing. There are a couple of unnecessary side-plots where the narrative goes off-kilter, taking its own sweet time to deliver its intended message - two and a half hours could have easily been two or under.

Rajkummar Rao and Bhumi Pednekar deliver dependable performances as you would expect. But it is debutant Chum Darang's easy screen presence and Gulshan Devaiah's effortless charm that catch the eye. Sheeba Chaddha as Rao's weirdly quirky widowed mother and Nitesh Pandey as Pednekar's doting father round out an altogether able supporting cast.

The movie's soundtrack is unmemorable, despite having names such as Amit Trivedi, Tanishk Bagchi and Ankit Tiwari compose music for it. Hitesh Sonik's score is also a letdown, and was perhaps the weakest part of the film.

We have conflicting opinions by this point about movies that deal with sensitive topics. Films that appeal to the masses while also delivering a message are still necessary for mainstream awareness. That being said, it also feels like it is no longer enough in 2022 for films to simply be a PSA about taboo topics - they should be backed up with strong plots or at least be entertaining.

Cheeky humour, a non-preachy outlook and solid performances all ensure that Badhaai Do does not struggle to entertain for the most part. We just wish the editing was as crisp. 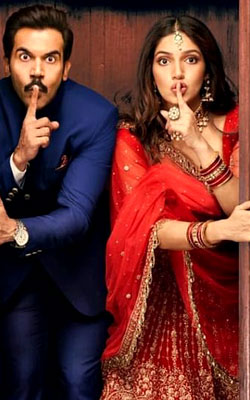 ADVERTISEMENT
This page was tagged for
Badhaai Do hindi movie
Badhaai Do reviews
release date
Rajkummar Rao, Bhumi Pednekar
theatres list
Follow @fullhyderabad
Follow fullhyd.com on
About Hyderabad
The Hyderabad Community
Improve fullhyd.com
More
Our Other Local Guides
Our other sites
© Copyright 1999-2009 LRR Technologies (Hyderabad), Pvt Ltd. All rights reserved. fullhyd, fullhyderabad, Welcome To The Neighbourhood are trademarks of LRR Technologies (Hyderabad) Pvt Ltd. The textual, graphic, audio and audiovisual material in this site is protected by copyright law. You may not copy, distribute, or use this material except as necessary for your personal, non-commercial use. Any trademarks are the properties of their respective owners. More on Hyderabad, India. Jobs in Hyderabad.