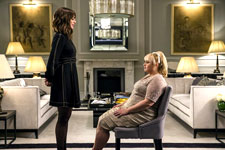 Punarvasu Pendse / fullhyd.com
EDITOR RATING
5.5
Performances
Script
Music/Soundtrack
Visuals
6.0
5.0
5.0
6.0
Suggestions
Can watch again
No
Good for kids
No
Good for dates
Yes
Wait for OTT
Yes
A few years ago, this particular reviewer went through a phase - watching old movies. Watching Robert Redford and Paul Newman playing off each other in The Sting (1973) was the best thing to come out of that. Dirty Rotten Scoundrels (1988) featured Michael Caine and Steve Martin at their peaks, in a "con-within-a-con" caper that was strangely reminiscent of The Sting, which is perhaps why it was so personally memorable.

So I set out, with great excitement (but also trepidation), to watch a remake of Dirty Rotten Scoundrels - set in the same fictitious idyllic town of Beaumont-sur-Mer in the French Riviera. Then again, Dirty Rotten Scoundrels itself was based on Bedtime Story (1964). The twist, this time around, is that the two con-men are replaced by con-women, complete with the declaration "women are better con artists than men because no man will ever believe that a woman is smarter than he is".

Sharply dressed, sophisticated Josephine Chesterfield (Anne Hathaway) chances upon the Australian grifter Penny Rust (Rebel Wilson) in a train bound for her home, and her playing field of Beaumont-sur-Mer in the south of France. Penny's crude antics do not sit well with Josephine - she decides to do everything to keep the small-time crook out of town.

But a bad Penny always turns up, and Chesterfield now decides to train her, and work with her. After a bunch of small "Lord Of The Rings" scams, the two women decide to trap a big fish - young tech billionaire Thomas Westerburg (Alex Sharp). But the best laid plans often go awry, and the two women realise much more than their pride is now at stake.

If levity and brevity were the only parameters to judge a piece of cinema, The Hustle could genuinely make a case for being watchable. Unfortunately, the script lacks inventiveness and largely makes itself seem trivial. Even considering that the film is a remake, director Chris Addison plays it very safe, with a clear vision of the end - everybody wins. What happens at the end of the second half is very predictable, and even the convoluted set-up that foreshadows it does nothing to make it interesting.

It is 2019, and Hollywood seems to struggle to move beyond fat jokes (fat people do need representation in the movies - it would just be good to ensure that all the comedy wasn't just over their weights). That being said, The Hustle manages to extract several laughs from you, with some genuinely witty jokes. Wilson's character using a trashy dress to camouflage herself after a botched-up attempt at a con job is hilarious. But the movie manages to recycle even that bit, making it seem like they are running out of jokes which, quite honestly, does The Hustle a disservice.

Rebel Wilson is bumbling and inept, and attempts to go past the fat jokes. Her brand of in-your-face humour, unfortunately, gets old very quickly. Anne Hathaway technically plays just the one role, but she gives off the impression of enacting multiple characters. She enjoys herself, apparently improvising at times. Alex Sharp lives up to his name. He plays the textbook nice guy, and his empathy for Penny seems genuine and heartfelt.

Maybe we as reviewers are conditioned to expect more from films having an all-female star cast. Equality, perhaps, is being okay with women starring in mediocre fare the same way that a lot of your average male stars often do, and not being lambasted solely for the same. Maybe it is time to reflect upon that, and just enjoy the show.
Share. Save. Connect.
Tweet
THE HUSTLE SNAPSHOT 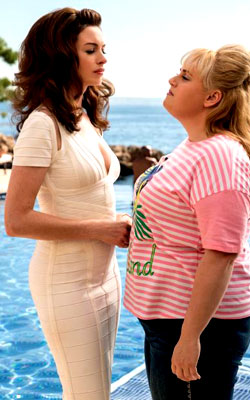 ADVERTISEMENT
This page was tagged for
The Hustle english movie
The Hustle reviews
release date
Anne Hathaway, Rebel Wilson
theatres list
Follow @fullhyderabad
Follow fullhyd.com on
About Hyderabad
The Hyderabad Community
Improve fullhyd.com
More
Our Other Local Guides
Our other sites
© Copyright 1999-2009 LRR Technologies (Hyderabad), Pvt Ltd. All rights reserved. fullhyd, fullhyderabad, Welcome To The Neighbourhood are trademarks of LRR Technologies (Hyderabad) Pvt Ltd. The textual, graphic, audio and audiovisual material in this site is protected by copyright law. You may not copy, distribute, or use this material except as necessary for your personal, non-commercial use. Any trademarks are the properties of their respective owners. More on Hyderabad, India. Jobs in Hyderabad.