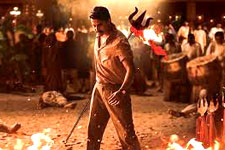 T J Reddy / fullhyd.com
EDITOR RATING
5.0
Performances
Script
Music/Soundtrack
Visuals
7.0
4.0
3.0
7.0
Suggestions
Can watch again
No
Good for kids
Yes
Good for dates
Yes
Wait for OTT
Yes
I loved History class as a kid. We were made privy to stories about the Cholas and the Pandavas. We learned about the Mughals and the British with their respective conquests. Soon after, the Indian Freedom Movement and its decades-long struggle took centrestage, and, as we realize, the history books update consistently with daily events.

The film tells the story of Vasudev Ghanta (Nani), an aspiring film director who has a penchant for perfection. One of his casting calls leads him to Keerthi (Krithi Shetty), a free-spirited young woman. They make a short film together, the strength of which affords Vasu an opportunity at making a feature-length film. He makes the film, and the film is a hit, but alas, he gets sued for plagiarism. He finds himself accused of copy-pasting the works of renowned Bengali activist Shyam Singha Roy.

Can Vasu prove his innocence? Who is Shyam Singha Roy? Why did this bit of preamble take over an hour of screen time? Well, the film has answers to two of those questions.

Shyam Singha Roy's triumphs and flaws are a by-product of its structure and the well-worn story it chooses to tell.

History classes stopped being fun to a whole host of my classmates because every chapter began and ended the same way. There once was a great conqueror who established an empire. A few of his successors expanded the empire. But sooner or later, a nimrod king destroyed the empire. Rinse and repeat ad nauseam. This film's plot is quite similar to the reincarnation stories of old.

While the familiarity with the plot might breed contempt, the setting of late '60s Kolkata is one we don't see all that often. The film shines a light on social evils while casting the titular character as a beacon against said ills. The movie's sense of morality is so on point that the traditional hero glorification song is set to him working at a printing press. These are nice touches.

What takes away from these occasional thought-provoking flourishes is that we discover nothing more about this character. Shyam has a set ideology, a tucked shirt (because Tuck Jagadish), and a groomed mustache. We spend time with him and want-away Devadasi, Mythreyi (Sai Pallavi), only to realize that the actors on screen are elevating fairly boilerplate material.

Even though we've all sat through our history lessons, how much do we know about Babur or Raja Raja Chola or Asaf Jah or Chatrapathi Shivaji? We understand Indrasena Reddy or Manik Basha more than these historical figures because we liked them as fully formed people instead of as one-note myths. Shyam Singha Roy, the character, is only a myth where a person should have been. One can say the Battles of Swalley, Plassey or Buxar were crucial to the fate of India, but we remember The Battle Of The Bastards from Game Of Thrones better.

Notice how we haven't spoken about the preamble; that isn't an accident. It is by design because it adds nothing to the story at large. One can hire a young and talented Krithi Shetty, write a decent character for her, get a good performance out of her, and wholly waste her because she doesn't fit into the main story.

However, the duo of Nani and Sai Pallavi get ample time to flex their acting skills. In a role that is wholly new to him, Nani delivers adequate performance. We hope this is a prelude for things to come, as we wouldn't want him boxed into a restrictive image. Sai Pallavi excels with her performance as Mythreyi/Rosie by infusing a wafer-thin character with pathos, grace, strength and dignity. A special mention of her sheer ability as a dancer who can weave together a story with her talents alone.

Mickey J Meyer's score and soundtrack flatter to deceive to a large degree. There is a palpable dissonance between what the score is aspiring to and its final form. However, while none of the songs or musical bits stands out particularly, the visual departments give a better account of themselves. The rich art direction, accurate set design, period-specific costumes and more add flavour to the proceedings without intentionally drawing a whole lot of attention to themselves. You would however expect more creative cinematography to join these praise-worthy aspects.

Flattering to deceive is the experience of watching Shyam Singha Roy in a nutshell. The best intentions, progressive politics, an immensely talented star cast and a savvy technical team can only do so much to prop up a mediocre story mired in millennia of mumbled retellings. I feel bad for my history teacher as she resembles this movie's director. Her enthusiasm for the subject did not infect her students as much as she would have wanted it to.

My history classes had two rows of backbenchers who came in for the exclusive purpose of joking around. The two rows of first benchers were quite busy taking notes with dreams of topping exams. The middle benchers of history a la yours truly needed something more to sink their teeth into. In a way, the semi-period piece Shyam Singha Roy transported me back in time. For making me feel like a bored teenager again, I thank it.
Share. Save. Connect.
Tweet
SHYAM SINGHA ROY SNAPSHOT 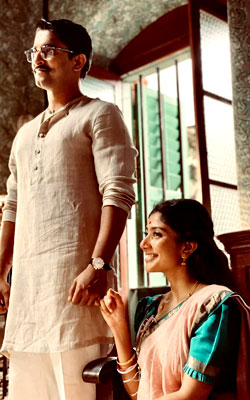 ADVERTISEMENT
This page was tagged for
Shyam Singha Roy telugu movie
Shyam Singha Roy reviews
release date
Nani, Sai Pallavi
theatres list
Follow @fullhyderabad
Follow fullhyd.com on
About Hyderabad
The Hyderabad Community
Improve fullhyd.com
More
Our Other Local Guides
Our other sites
© Copyright 1999-2009 LRR Technologies (Hyderabad), Pvt Ltd. All rights reserved. fullhyd, fullhyderabad, Welcome To The Neighbourhood are trademarks of LRR Technologies (Hyderabad) Pvt Ltd. The textual, graphic, audio and audiovisual material in this site is protected by copyright law. You may not copy, distribute, or use this material except as necessary for your personal, non-commercial use. Any trademarks are the properties of their respective owners. More on Hyderabad, India. Jobs in Hyderabad.