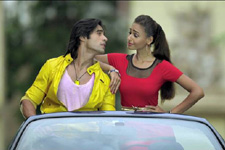 Kritika Deval / fullhyd.com
EDITOR RATING
3.5
Performances
Script
Music/Soundtrack
Visuals
4.0
3.0
5.5
5.0
Suggestions
Can watch again
No
Good for kids
No
Good for dates
No
Wait for OTT
No
We have it all figured out. Those girls in college movies who date jerks before the hero shows up and you're wondering why such a hottie would date such a caricature douchebag in the first place? It's because of abusive step-fathers. At the very least, Karle Pyar Karle gets credit for trying to explain the deep dark secrets behind the candy-coated little anarchies that are Bollywood campuses.

And, at the most, the film gets credit for getting George Of The Jungle back from the past and civilizing him enough to play the Tarzan-like Kabeer (Shiv Darshan). They didn't quite succeed. We can only assume that Kabeer said the words "Hey Jazz... Don't gas... just because you are an ass..." to a rival chimp who, quite frankly, looked mad enough to chomp him to death.

Also, congratulations to the KPK team on creating a universe where guys can make bets about getting clothes off of skimpily-clad girls right in front of said girls, and where the girls gladly skimp further. You might argue that these frail specimens of femininity are college girls in Chandigarh, who are famed in all of Bollywood-land for their aversion to clothing. However, it is safe to assume that the makers spend all their money on leather jackets and duck prints for the guys and hence had to cut corners (hehe) on dressing the women.

Now, so far, we have inferred that the film is built around a jerkish "villain", a heroine with a questionable intellect and minute clothing, and a hero with an astonishing amount of respect for his simian ancestry. "But what original things to build a movie around!" we know you're thinking, "What must the story be like?" Hold your horses, we'll tell you.

It's about two people with a death wish that everyone around them eventually wants fulfilled. Preet (Hasleen Kaur) and Kabeer not only knew each other as kids, but also spent a considerable amount of time egging each other onto the other side of disaster's brink. Why? Apparently because "Game on!" Then, something happens that we couldn't completely figure out, because sane people don't exist in this version of Lavasa (or, to be honest, any other), and the two disaster mongers are split.

All is not lost, however, because Kabeer is prepared for just such a situation in case well-meaning parents decide that they're not exactly good for each other. The answer? Matching bracelets, and a prank-attempted-rape 10 years later to jog Preeti's memory. That Preet didn't wonder for a moment that something might be very wrong with her puppy love only serves to show how how much wronger she grew up to be.

The rest of the film is all about how the two out-psychopath each other as they prepare for co-soulmate status, disapproving moms and boyfriends with gangsters for dads notwithstanding.

The point is, you don't have to put up with any of it. Not Preet's irritating whines. Not Kabeer's smugness. Not the so-called villains who seem more like neutered versions of south Indian cinema goons. Definitely not the kind of retarded student romance that died out in Tollywood about ten years ago. The half-way decent flashbacks involving kids doing all the things you always wanted to do as a child do not make up for the rest of it.

As irredeemable as all the elements of KPK are, the music and the technical departments actually did a decent job. The film wears a polished look that gets the right amount of zany for a movie with nuts for brains. And the music is perhaps the only thing the makers can still use to drag hapless people to the theatres.

One question for the producer before we wrap it up: We get that you think your son should, by all that is right and good, replace the sun. But did you have to make him brag about the "junk" in his "trunk" in his very first film? Did you? Really?
Share. Save. Connect.
Tweet
KARLE PYAAR KARLE SNAPSHOT 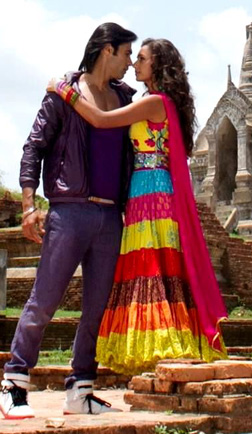 ADVERTISEMENT
This page was tagged for
karale pyar karale move online
Karle Pyaar Karle hindi movie
Karle Pyaar Karle reviews
release date
Shiv Darshan, Hasleen Kaur
Follow @fullhyderabad
Follow fullhyd.com on
About Hyderabad
The Hyderabad Community
Improve fullhyd.com
More
Our Other Local Guides
Our other sites
© Copyright 1999-2009 LRR Technologies (Hyderabad), Pvt Ltd. All rights reserved. fullhyd, fullhyderabad, Welcome To The Neighbourhood are trademarks of LRR Technologies (Hyderabad) Pvt Ltd. The textual, graphic, audio and audiovisual material in this site is protected by copyright law. You may not copy, distribute, or use this material except as necessary for your personal, non-commercial use. Any trademarks are the properties of their respective owners. More on Hyderabad, India. Jobs in Hyderabad.