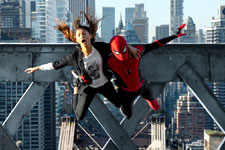 Punarvasu Pendse / fullhyd.com
EDITOR RATING
7.0
Performances
Script
Music/Soundtrack
Visuals
8.0
5.0
6.0
8.0
Suggestions
Can watch again
Yes
Good for kids
Yes
Good for dates
No
Wait for OTT
No
The year is 2007, and you're expecting the third film in the Sam Raimi Spiderman series to outdo the second one featuring Doc Ock (Alfred Molina), with a cast that featured multiple villains.

The year is 2016, and you're expecting the third film in the Marc Webb Amazing Spider-Man series to be better than the second one after Electro (Jamie Foxx) is vanquished, with a cast that was supposed to be featuring multiple villains.

And the answer, mostly, seems to be in the affirmative. The Marvel Cinematic Universe (or the MCU) is no stranger to ambition, with the Avengers franchise being the highest-grossing movie series of all time. Only, this time the enemy was old contractual obligations, production agreements and legal limitations - an enemy that is far harder to overcome than a cinematic antagonist. And if not anything else, piecing this film together to not only further the MCU narrative but also to give a satisfactory send-off to the characters we've known and loved from the previous Spider-Man franchises is no mean feat.

Spider-Man: No Way Home is the sequel to Spider-Man: Homecoming (2017) and Spider-Man: Far From Home (2019). Peter Parker / Spider-Man (Tom Holland), now almost out of high school, is dealing with his secret identity being exposed to the public by J Jonah Jameson (J K Simmons), in the previous movie. The fallout has also affected his best friends, MJ (Zendaya) and Ned Leeds (Jacob Batalon), and Parker seeks out Dr Strange (Benedict Cumberbatch) to rectify the situation.

Of course, Peter manages to worsen the situation, leading to some inter-dimensional bad guy summonings, and once again it is upto Spider-Man to save the day.

The tone of Spider-Man: No Way Home is much darker than those of the previous two films in the MCU Spider-Man. Peter Parker is more in charge in this film than Spider-Man, and is suffering and under pressure. The playful quips and the banter is much more toned down, and oftentimes absent. Conversely, the antagonists are given much more screen time - with the duo of Doc Ock and Green Goblin being the highlights (which comes as no surprise to most of us). The big reveal is not entirely unexpected, but is handled in a way that would warm the hearts of most Spider-Man fans.

While the MCU has oftentimes deemed the storyline secondary to the shenanigans of its much-loved characters, it is extremely blatant in Spider-Man: No Way Home. Add the nostalgia hit that Marvel expects and you have the recipe for unabashed fan service. But Marvel commit to it, they deliver, and you end up absorbed in the drama unfolding in front of your eyes - isn't that the ultimate endgame for any sort of entertainment?

Tom Holland is surprisingly comfortable in a grittier role as Peter Parker, and Zendaya and Jacob Batalon are able co-stars. Benedict Cumberbatch has been made to look dumb as Dr. Strange here (which is strange), but that one's on the script, not him. The returning cast from the previous Spider-Man franchises are the real show-stealers, especially Alfred Molina and Willem Dafoe.

Michael Giacchino's score isn't as memorable as it was in Spider-Man: Far From Home - we don't have any earworms this time around. The visual department was never an issue with the MCU - Mauro Fiore's cinematography provides some fantastic action scenes, and the CGI is polished as always.

Spider-Man: No Way Home is watchable purely on the basis of the emotional impact it has, especially for people who grew up with the various Spider-Man movie franchises (and doubly so for comic book aficionados). The big reveal feels earned, even though most people expect it, and it is ever so satisfying.

What seal the deal, however, are the performances. The heroes, the villains, the supporting cast, the crew, and the producers and studio heads who navigated contentious film rights' agreements to bring it all together - everyone comes together to create an experience that fans have been craving for a long time. 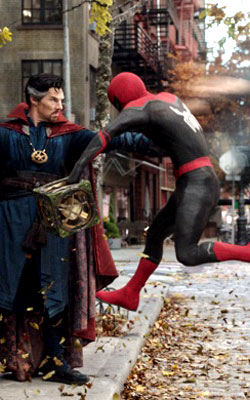 ADVERTISEMENT
This page was tagged for
Spider-Man: No Way Home - Hindi hindi movie
Spider-Man: No Way Home - Hindi reviews
release date
Tom Holland, Zendaya
theatres list
Follow @fullhyderabad
Follow fullhyd.com on
About Hyderabad
The Hyderabad Community
Improve fullhyd.com
More
Our Other Local Guides
Our other sites
© Copyright 1999-2009 LRR Technologies (Hyderabad), Pvt Ltd. All rights reserved. fullhyd, fullhyderabad, Welcome To The Neighbourhood are trademarks of LRR Technologies (Hyderabad) Pvt Ltd. The textual, graphic, audio and audiovisual material in this site is protected by copyright law. You may not copy, distribute, or use this material except as necessary for your personal, non-commercial use. Any trademarks are the properties of their respective owners. More on Hyderabad, India. Jobs in Hyderabad.