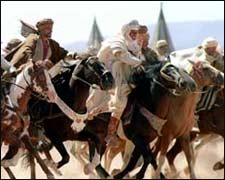 Charisma Murari / fullhyd.com
EDITOR RATING
5.0
Performances
Script
Music/Soundtrack
Visuals
NA
NA
NA
NA
Suggestions
Can watch again
NA
Good for kids
NA
Good for dates
NA
Wait to rent it
NA
The trouble with Westerns (even with quasi-Westerns, as some of us found out) is that, sometimes, you actually understand them. You 'understand' that the protagonist will have many a brush with danger, each almost invariably a close shave (alas, the same cannot be said about his stubble); many a glad-eyed pretty lady who would gladly...; many a personal demon preying on his soul; and, finally, you 'understand' exactly how the film is going to end. However, what remains an eternal mystery that you will probably never 'understand' is why so many of us still watch them.

Hidalgo is one flick that you will 'understand'. It calls itself a biopic, but can perhaps be better described as, what Somerset Maugham would dub, a biographical movie - fact and fiction are inextricably intertwined, but with (from what one hears) a more generous helping of the latter.

Set in 1890, the film attempts to tell the story of Frank Hopkins (Viggo Mortensen) and his mixed-breed Mustang, Hidalgo, who make a formidable team and are touted as the best long-distance racers in the world. The claim is challenged by a Bedouin chief who believes the title belongs to his cherished thorough-bred stallion of enviable lineage, Al-Hatta, and thus, the awesome-twosome (Hopkins and his equestrian pal) find themselves ploughing through the "Ocean Of Fire", a three thousand mile endurance race across the meanest deserts of Arabia for a hundred thousand dollar reward. And good old cowboy pride (it is a Western).

Just as the mantra for all movies that aim to make heroes of ordinary mortals dictates, the horse is promptly denounced as the underdog. Though Hopkins finds favour with the ladies (it doesn't hurt to be pretty, we learn), the men around him would gladly help him right over a cliff (hey, wait a second! is that because he was popular with the ladies?).

Lady Anne Davenport (Louise Lombard), however, is a 'curious' character who will stop at nothing to ensure victory for her mare which was also contesting. She makes dear old Hopkins an offer of thirty thousand dollars and, ahem, herself, only to have it (predictably) turned down, and we are reminded, once again, why "hell hath no fury like a woman scorned".

She gets into a nexus with the evil Prince Al Reeh (Said Taghmaoui), who wants the Bedouin chief's stallion and figures that the way to man's horse is through his daughter, and, therefore, has Jazira (Zuleikha Robinson) abducted. After Hopkins rescues the princess, there is a warm moment. "I want you to see me," she says, and takes off her veil. "Whaa...? If I wanted this I'd read a Mills and Boon," you say, and the "warmth" in the moment, you realise, was just the summer heat.

The movie cannot be described as 'well-made'. It has to be conceded, however, that the actors have made a committed effort. Perhaps Lady Davenport's British accent could have sounded more authentic, and Yusef (Harsh Nayyar) could have appeared more Arabian rather than as someone from the Indian sub-continent. The visual effects leave a little to be desired. And one expected a better directorial endeavour from the man who was at the helm of movies like Jumanji.

If you are someone looking to placate the child in you who wants to watch a film about guns, horses and a lot of bravado, then watch this. At any rate, you won't miss much if you miss it.
Share. Save. Connect.
Tweet
HIDALGO SNAPSHOT

ADVERTISEMENT
This page was tagged for
Hidalgo english movie
Hidalgo reviews
release date
Viggo Mortensen, Omar Sharif
theatres list
Follow @fullhyderabad
Follow fullhyd.com on
About Hyderabad
The Hyderabad Community
Improve fullhyd.com
More
Our Other Local Guides
Our other sites
© Copyright 1999-2009 LRR Technologies (Hyderabad), Pvt Ltd. All rights reserved. fullhyd, fullhyderabad, Welcome To The Neighbourhood are trademarks of LRR Technologies (Hyderabad) Pvt Ltd. The textual, graphic, audio and audiovisual material in this site is protected by copyright law. You may not copy, distribute, or use this material except as necessary for your personal, non-commercial use. Any trademarks are the properties of their respective owners. More on Hyderabad, India. Jobs in Hyderabad.