I Me Aur Main Review 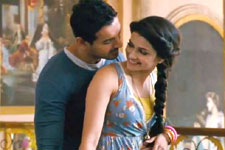 Nupur Barua / fullhyd.com
EDITOR RATING
6.0
Performances
Script
Music/Soundtrack
Visuals
6.0
4.0
4.0
6.0
Suggestions
Can watch again
Yes
Good for kids
No
Good for dates
No
Wait to rent it
No
While the Indian film industry has not really portrayed flawed heroes too often, Saif Ali Khan has made an attempt to show us how "normal" single Indian men live and what they think (Salaam Namaste, Luv Aaj Kal, Cocktail). And now John Abraham wants to go that route, too, although he did play some exaggerated version of the eternal bachelor in some of his earlier movies (Garam Masala).

Kapil Sharma, in his debut film I, Me Aur Main, makes an effort to bring the romance of the rom com back in Bollywood. He almost succeeds.

Ishaan (John Abraham) is a self-obsessed young music producer. He is surrounded by women in every aspect of his life - there is his indulgent mother (Zarina Wahab), his possessive but sensible elder sister (Mini Mathur), his long-suffering boss (Raima Sen), and his even longer suffering girlfriend (Chitrangada Singh). Ishaan thinks, thanks to these women, that he is God's gift to womankind.

This delusion is soon shattered when his exasperated girlfriend Anushka throws him out of the house they share. She cannot take his self-indulgence and complete disregard to responsibility any more.

Ishaan then moves out to a less expensive place, and his mother moves in to help him settle down. He then meets the stylist Gauri (Prachi Desai), who tells him what life is really all about, mainly, responsibility. They fall in love, but life is not always that simple.

The biggest drawback in this otherwise interesting movie is the lack of a proper script. The story just does not flow, and most of the situations seem contrived in an effort to move the story forward. The dialogues do not help, either. The humour is forced, and the plot points become repetitive.

Of the characters, the women are better sketched than the one man responsible for carrying the film on his shoulders. The mother is slightly overdone with her naivet?© and indulgence. It is Shivani, the sister, who is the most thought-out character. She loves her brother, but also resents the man he has become - the overconfident, nonchalant man-child who hurts people and their sentiments.

The makers were clear what they wanted to do with the first girlfriend, but they forgot to detail out the second. Gauri seems more like a robot than the voice of reason.

The script expects you to understand what Ishaan is all about and why he has become the man that he is, but it also takes a moralistic view on what the role of a man should be in society.

John Abraham tries really hard, but there is not much he can do with a weak character sketch. Also, it is a little difficult to believe that any character John Abraham plays is inherently a bad person - and that is what the point of the story should have been - to show a really hateful person who reforms himself. He looks good, as usual.

Chitrangada Singh has played a similar role in her previous recent movie, Inkaar. She looks angry and condescending even when she cracks a joke. She does look very appealing at times.

Prachi Desai is dull and uninspiring, contrary to what the role expects from her. She comes across as a more self-absorbed, holier-than-thou person than she should.

The other actors do a decent job, but Mini Mathur deserves a special mention for being so convincing. Raima Sen has too little screen time, but she makes an impact.

Costume and production designs are a little too surreal for a "realistic" romantic comedy. The cerebral audience may not watch the movie because of the way it looks. Cinematography is decent. The music is bearable, but nothing to write home about.

The movie tries its best to bring a certain quality of filmmaking to the ever-changing audience, but it falls short of the expectations it had of itself. Otherwise, it is worth a watch, just to realise how women are responsible for the way a man turns out. The heavy drama may seem unnecessary, but its relatively shorter length (less than two hours) makes it more bearable than some of the other pretentious stuff we have been subjected to lately.
Share. Save. Connect.
Tweet
I ME AUR MAIN SNAPSHOT 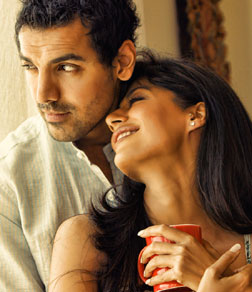 ADVERTISEMENT
This page was tagged for
Aur Main John Abraham movie full HD
I Me Aur Main hindi movie
I Me Aur Main reviews
release date
John Abraham, Chitrangada Singh
Follow @fullhyderabad
Follow fullhyd.com on
About Hyderabad
The Hyderabad Community
Improve fullhyd.com
More
Our Other Local Guides
Our other sites
© Copyright 1999-2009 LRR Technologies (Hyderabad), Pvt Ltd. All rights reserved. fullhyd, fullhyderabad, Welcome To The Neighbourhood are trademarks of LRR Technologies (Hyderabad) Pvt Ltd. The textual, graphic, audio and audiovisual material in this site is protected by copyright law. You may not copy, distribute, or use this material except as necessary for your personal, non-commercial use. Any trademarks are the properties of their respective owners. More on Hyderabad, India. Jobs in Hyderabad.