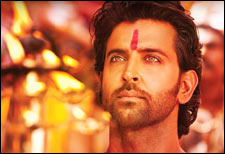 Nupur Barua / fullhyd.com
EDITOR RATING
6.5
Performances
Script
Music/Soundtrack
Visuals
5.0
4.0
6.0
6.0
Suggestions
Can watch again
No
Good for kids
No
Good for dates
Yes
Wait to rent it
No
Karan Johar, when announcing his new Agneepath, stressed that it was more a "tribute" than a recreation. This remake is a salute to Yash Johar, Mukul Anand, and the kohl-eyed, gruff and bitter Vijay of 1990, Amitabh Bachchan (who won the National Award for Best Actor then).

It is 1977, and the Emergency has just ended. The Raja of Mandwa, an obsolete and disgruntled zamindar, who resents schoolmaster Deenanath Chauhan's (Chetan Pandit) popularity, waits for Kancha's arrival. Turns out Kancha (Sanjay Dutt) is his bald son, who has (a) an incomprehensible fear of mirrors, and (b) plans to make Mandwa the cocaine capital of the region.

Deenanath advises the villagers against leasing their lands to Kancha, and is brutally hanged from a rather striking banyan tree. Deenanath's 12-year-old son Vijay (Arish Bhiwandiwala) and pregnant wife Suhasini (Zarina Wahab), are forced to flee to Mumbai. Suhasini gives birth to a girl on a pavement in a red light area.

Vijay endears himself to flesh trader and drug peddler, Rauf Lala (Rishi Kapoor), and joins his gang. The movie then shifts to 15 years later, and the adult Vijay (Hrithik Roshan) now lives in a chawl, estranged from his mother and sister, and also the local goon with a heart of gold. His aim is to take Mandwa back, and everything that he does, however nonchalantly, is a means to that end.

You cannot help but wish that Karan Malhotra had paid attention to specifically 2 aspects of the screenplay - the plot, and the characterisation.

There is too much happening in the first few minutes, and you may lose track. Thankfully, Om Puri, who plays Gaitonde, does a recap or two through his dialogues (thus effectively summarising, for the audience, the story so far). The film has one huge advantage, however - the certainty that most people will watch it because they already know the story of the original movie.

Relationships between characters have no depth, whether it is Vijay's conflict with the cop who reminds him of his father, or his reluctance to marry his childhood sweetheart.

The only consistent characters are Gaitonde and Suhasini Chauhan. This may have something to do with the actors (Om Puri and Zarina Wahab), too, whose sincere portrayals make their reel personas engaging (predictable, yes, but also convincing).

But one is never sure what Hrithik Roshan is playing - the brooding angry young man, or the conniving mastermind, or just a bitter man hell-bent on revenge. His face vibrates in slow motion whenever he is angry, or sad, or in love, or perplexed, or hungry. Not his strongest performance, despite his best effort to look intense.

Sanjay Dutt is also never too sure of what he has to do, and looks a little uncomfortable in certain sequences. His (supposedly) evil laughter is more of an afterthought. He is best in scenes where he has to beat people up - and that he does with aplomb.

Rishi Kapoor is creepy and menacing. He plays the godfather who treasures loyalty above all, but his character suddenly changes into that of a scheming, double-crossing gang leader.

Priyanka Chopra does not do much beyond coquettish giggles and tears. Most of the other actors - Sachin Khedekar, Pankaj Tripathi and Deven Bhojani - are underused. The young Vijay, played by Arish Bhiwandiwala, though not a patch on Master Manjunath from the original movie, is aptly depicted.

As far as sound design is concerned, everything is loud, including the visuals. The recording is not too great, and some background noises becomes deafening. The music overall is decent. Chikni Chameli, the item number, is catchy.

A lot of money has gone into production design and costumes, evidently, but the period that the movie is set in (1977, and 1989) does not establish itself. Also, the colour palette of the entire film is not cohesive enough to do justice to the cinematography. Some of the action sequences are done pretty well.

It is not clear how Karan Johar planned to thwart the inevitable comparisons. There is a lot that is not right with the movie - we wish the plot was slicker, and had more depth - but the grandeur is alluring.
Share. Save. Connect.
Tweet
AGNEEPATH SNAPSHOT 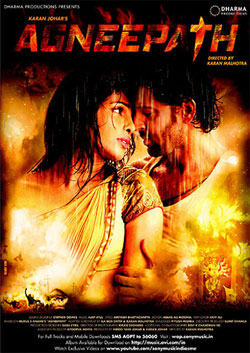 ADVERTISEMENT
This page was tagged for
Agneepath hindi movie
Agneepath reviews
release date
Rishi Kapoor, Sanjay Dutt
theatres list
Follow @fullhyderabad
Follow fullhyd.com on
About Hyderabad
The Hyderabad Community
Improve fullhyd.com
More
Our Other Local Guides
Our other sites
© Copyright 1999-2009 LRR Technologies (Hyderabad), Pvt Ltd. All rights reserved. fullhyd, fullhyderabad, Welcome To The Neighbourhood are trademarks of LRR Technologies (Hyderabad) Pvt Ltd. The textual, graphic, audio and audiovisual material in this site is protected by copyright law. You may not copy, distribute, or use this material except as necessary for your personal, non-commercial use. Any trademarks are the properties of their respective owners. More on Hyderabad, India. Jobs in Hyderabad.