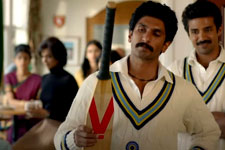 Punarvasu Pendse / fullhyd.com
EDITOR RATING
7.0
Performances
Script
Music/Soundtrack
Visuals
7.0
6.0
4.0
7.0
Suggestions
Can watch again
Yes
Good for kids
Yes
Good for dates
Yes
Wait for OTT
No
Before we say anything about 83 as a movie, we need to talk about the actual World Cup of 1983, and how much it actually mattered. The Indian cricket team, having underachieved in both the previous editions of the newly formed Cricket World Cup in 1975 and 1979, instilled little faith in its supporters. And the heavyweights of the cricketing world - West Indies - had won both the previous editions of the World Cup without losing a single match, and were the favourites to win in 1983 as well.

The West Indies team had its formidable openers, Sir Gordon Greenidge and Desmond Haynes, followed by the world's best player, Sir Vivian Richards, and their talismanic captain, Sir Clive Lloyd. Their lineup boasted terrifyingly fast pacemen - Michael "Whispering Death" Holding, Andy "Hit Man" Roberts and Joel "Big Bird" Garner alongside Malcolm Marshall. India was written off by journalists even before the tournament had begun, and they were to face West Indies in the very first game.

Cinema and cricket - two of India's biggest celebrations - don't always go hand in hand when it comes to the Indian audience (Indian fans blamed Anushka Sharma for Virat Kohli's dips in form). It takes a certain amount of care to present on the big screen an event that holds this much sentimental value for millions of Indian people, and we are happy to report that director Kabir Khan is up to this monumental task.

Everyone and their mother knows the underdog story of the Indian cricket team in the 1983 World Cup, and we will refrain from talking about it. What deserve talking about, however, are the small instances away from the cricketing action that make the movie entertaining - attention to small details that have been gleaned from interactions with players or from watching their interviews, the interpersonal relationships between the group of unheralded young men on foreign soil, and the faithful recounting of the story with little embellishment.

It isn't of course a word-for-word retelling of the story - that would not make for compelling drama in a mainstream Bollywood film. And to infuse said drama, Khan, who previously used patriotic sentiments to good effect in Bajrangi Bhaijaan, employs them again in 83 - using cricket as a bridge for communal tension, and the India-Pakistan conflict, in separate instances. The drama does get heavy-handed at times, especially in the last 30 minutes, but it is bearable.

The actual recreations of the games are easily the best parts of the movie, and the cricketing action has been weaved into the plot seamlessly. The recreation of the fateful game against Zimbabwe whose telecast was cancelled due to a BBC strike is entertaining, albeit melodramatic, and it manages to keep you hooked to the action despite knowing the eventual conclusion already.

A lot of effort was put in to get Ranveer Singh to look like Kapil Dev, and the actor has put in an inspired performance. He nails The Haryana Hurricane's mannerisms, his slow drawl and his oft-imperfect English speech, and his body language - right down to his signature batting action and his iconic "Natraj" shot.

Tahir Raj Bhasin captures Sunil Gavaskar's conflicted emotions due to his unflattering World Cup performances adequately, and Jiiva as Kris Srikanth portrays the flamboyant left-handed opening batsman quite well while adding some humour to the proceedings. Saqib Salim looks as dependable playing Mohinder Amarnath as "Jimmy" himself was to the Indian cricket team.

Chirag Patil captures the easy charm of his father Sandeep Patil, a wonderful casting choice - as was getting Mohinder Amarnath himself to portray his father Lala Amarnath, and Mali Marshall to portray Malcolm Marshall.

Deepika Padukone and Boman Irani have small roles to play as Romi Bhatia and Farokh Engineer respectively, and add warmth to the roles. Jatin Sarna, who we know for playing impetuous characters in the past, does well as the fiery Yashpal Sharma, while Sahil Khattar looks eerily similar to Syed Kirmani.

Not all the casting choices are as good, with Harrdy Sandhu and Nishant Dahiya feeling a bit off. Pankaj Tripathi has a rare bad outing, with an overzealous act as manager PR Man Singh.

Julius Packiam's score and Pritam's music are extremely loud, and not very fun. They definitely drag the film down, and our ears were ringing as we were coming out of the theatre.

83 is an entertaining, nostalgic re-telling of the Indian cricket team's fairytale 1983 Cricket World Cup run. If you, like a lot of people, feared that a movie would not capable enough of dealing with the event, rest assured - it is. Entertaining, and for the whole family - a fun Christmas film! 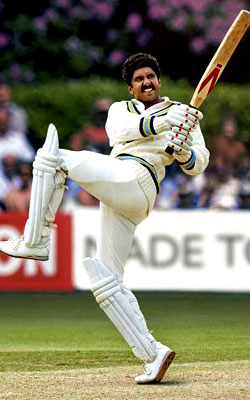 ADVERTISEMENT
This page was tagged for
83 - Telugu telugu movie
83 - Telugu reviews
release date
Ranveer Singh, Deepika Padukone
theatres list
Follow @fullhyderabad
Follow fullhyd.com on
About Hyderabad
The Hyderabad Community
Improve fullhyd.com
More
Our Other Local Guides
Our other sites
© Copyright 1999-2009 LRR Technologies (Hyderabad), Pvt Ltd. All rights reserved. fullhyd, fullhyderabad, Welcome To The Neighbourhood are trademarks of LRR Technologies (Hyderabad) Pvt Ltd. The textual, graphic, audio and audiovisual material in this site is protected by copyright law. You may not copy, distribute, or use this material except as necessary for your personal, non-commercial use. Any trademarks are the properties of their respective owners. More on Hyderabad, India. Jobs in Hyderabad.