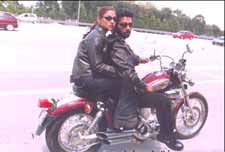 EDITOR RATING
5.0
Performances
Script
Music/Soundtrack
Visuals
NA
NA
NA
NA
Suggestions
Can watch again
NA
Good for kids
NA
Good for dates
NA
Wait for OTT
NA
From mythology to Mario Puzo, the nether world has been quite benevolent in the potential for gripping tales that it has offered its users, and Suri is no exception. But mythology and Mario Puzo realized that potential fully. Suri is an exception.

Imagine Tarun from Nuvve Kaavali with Nagaruna's outlook in Siva, and you'll get a pretty good feel for Suri. The guy crackling with laughter and making the most of his college life suddenly finds himself wrestling with underworld elements. And that is something he is too keen to avoid. But karma being what it is, the underworld sucks him and exposes him to its darker side, revealing its ruthless stranglehold over the people. An oft-told tale, but always with potential to make a good narrative - only, this one somehow doesn't get it all right.

Suri (Chakravarti) is a college student, the regular kind you see in Telugu films playing pranks at someone's expense and making merry the whole year round. He falls in love with Gayatri (Priyanka), and despite initial hiccups they get along famously. But only for a little while. Her father, a manager in a cinema hall, is not too happy with her love affair, and with the help of an underworld warlord Kishan, he is forced to threaten Suri. The college kid reluctantly displays his muscle power, but is soon overpowered and stabbed by Kishan's men.

From here Suri loses control over his life as his father Ram Das (Jayaprakash Reddy), a dreaded underworld don, quickly makes amends by unleashing his power over his enemies. Events take an unpredictable turn and before Suri can recover, his girlfriend is threatened by Kishan's men. Suri, who doesn't want anything to do with his father's profession or with the violent underworld, seeks to wriggle himself and his girlfriend out of this nefarious world.

The idea is good, but its execution needs a lot to be desired. The movie is devoid of seriousness though Chakravarti makes an honest attempt to fit into a realistic role of desperately keeping himself away from becoming a gun-toting don. What the movie fails in is in the lack of a credible love story. The romance looks like a series of haphazard incidents strung together just to pave the way for the serious stuff to follow. And when the guns start booming in the second half, we keep wondering whether it is necessary at all for two groups to fight it out over such a trivial love story. If only the makers had done a little homework on the screenplay, it would have made an interesting movie.
Share. Save. Connect.
Tweet
SURI SNAPSHOT

ADVERTISEMENT
This page was tagged for
Suri telugu movie
Suri reviews
release date
J D Chakravarti, Priyanka
theatres list
Follow @fullhyderabad
Follow fullhyd.com on
About Hyderabad
The Hyderabad Community
Improve fullhyd.com
More
Our Other Local Guides
Our other sites
© Copyright 1999-2009 LRR Technologies (Hyderabad), Pvt Ltd. All rights reserved. fullhyd, fullhyderabad, Welcome To The Neighbourhood are trademarks of LRR Technologies (Hyderabad) Pvt Ltd. The textual, graphic, audio and audiovisual material in this site is protected by copyright law. You may not copy, distribute, or use this material except as necessary for your personal, non-commercial use. Any trademarks are the properties of their respective owners. More on Hyderabad, India. Jobs in Hyderabad.