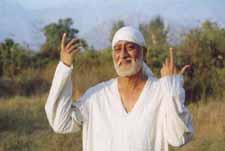 It is said that you need to have the guidance of a guru to get on the right path for mukti - salvation, the ultimate goal of man. So where do you find the guru? Like always, that's the wrong question. If you are ready to receive him, as Kabir said, the guru himself will come to you.

Sai Baba of Shirdi was one such guru - a man who took the hands of the people and led them to the paths of self-realization, and helped them see their inner gods. And this film is a portrayal of the life and times of Baba, and showcases some of the miracles that occurred due to the faith of his devotees.

Arjun, a wealthy NRI, is an atheist, completely against the whole idea of prayer and faith - especially against Sai Baba. His friend Malik is a devotee, and tries to make him believe in the power of faith and God. Malik takes the examples of two of Baba's devotees, and narrates to him their stories.

A wealthy industrialist is gripped by a financial crisis, and is just about to lose everything he ever possessed. His wife, an ardent devotee of Baba, insists they go to Shirdi to spend a few days. On their way, the husband has a vision of Baba, who tells him not to be so attached to his material goods - "For, what is life but a passing whim / We come to this earth empty handed, and so shall we return the same way."

The industrialist sees the truth in these words, and on his return to Mumbai, finds his problems all solved due to Baba's grace.

Arjun is still a skeptic, but due to some divine intervention finds himself in Shirdi. And as he finds rich successful men and the poor all giving up their pursuits to be of Baba's service, his soul awakens to the teachings of the saint.

Now the movie launches into a full-scale narrative about the life and teachings of Baba.

A young Baba, all of 12 years, first appears in Shirdi, and causes a storm to abate and makes it possible for a blind man to see again. After these acts he disappears from there, and under the tutelage of his guru, travels around the country gaining knowledge.

Baba returns to Shirdi after his education, into the loving arms of the people who regard him as nothing short of a deity. Loved and respected by all, he lives as a fakir, on the alms of people.

Sai Baba was a divine spirit that willed itself into a human form to fulfill a mission of awakening man and his divine nature. He had the unique quality of appearing in the form of the god that the other person believed in - and hence convincing him of his own divine nature. Thus, the skeptics who came in search of a 'fake', upon seeing their own lords in the form of Baba, soon turned into one of his flock. The various miracles performed by him, like making lamps burn without oil, bringing a dead person to life and saving a man from death, are all portrayed in a convincing manner.

The movie traces the teachings of Sai Baba, and, through a rich kaleidoscope of songs, puts forth the faith that millions of Indians have in this mystic. Lakshmi, Shama, Tantiya, Raheem - all of his devotees star in this movie, which moves from the curing of the miseries of the people of Shirdi to the realization by a non-believer in the power of Baba's divine spirit and the time that he attains 'Maha Samadhi'.

The film can best be described as a large-scale movie aimed earnestly to bring knowledge to the masses of the miracles that faith can lead to. There is some good acting by Sudhir Dalvi as 'Sai Baba', and by a host of other actors who keep springing onto screen in songs... which includes Shammi Kapoor, Divya Dutta and even Dharmendra!

The film is edited crisply in the beginning, but begins to drag its feet along towards the end. Yet, if you are an agnostic or have been postponing the choosing of your faith, you must watch this movie - not to be converted, but to appreciate the values of humanity and tolerance that seem to be eluding us today. The songs may fade in your ears and you perhaps can't relate to the dancing, but you can still head back home into the arms of your faith, which keeps waiting for you to return - silent, unyielding and strong.
Share. Save. Connect.
Tweet
SHIRDI SAI BABA SNAPSHOT

ADVERTISEMENT
This page was tagged for
nagarjuna shirdi sai movie
shirdi sai baba 3 movie
shirdi sai baba movie photo
sai bab dvotee reviews
sai baba full movie hindi
Follow @fullhyderabad
Follow fullhyd.com on
About Hyderabad
The Hyderabad Community
Improve fullhyd.com
More
Our Other Local Guides
Our other sites
© Copyright 1999-2009 LRR Technologies (Hyderabad), Pvt Ltd. All rights reserved. fullhyd, fullhyderabad, Welcome To The Neighbourhood are trademarks of LRR Technologies (Hyderabad) Pvt Ltd. The textual, graphic, audio and audiovisual material in this site is protected by copyright law. You may not copy, distribute, or use this material except as necessary for your personal, non-commercial use. Any trademarks are the properties of their respective owners. More on Hyderabad, India. Jobs in Hyderabad.