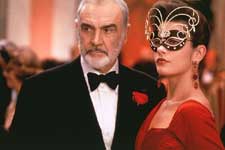 Feroz Hassan / fullhyd.com
EDITOR RATING
6.0
Performances
Script
Music/Soundtrack
Visuals
NA
NA
NA
NA
Suggestions
Can watch again
NA
Good for kids
NA
Good for dates
NA
Wait for OTT
NA
James Bond is the kind of character that, even if he crossed over to the other side of the law, would pull off all the impossible things, with perfect equanimity, with a gentleman's smirk, and with the most gorgeous girl(s) hanging onto him (and knowing him, not for long). At least, I always thought that way. But watching Entrapment, I was forced to rethink some parts of the statement. The fact could be that without Madam M to guide him, the man could be rather sulky, and even a reluctant lover (can't imagine that).

It's just as well that Sean Connery's character in the movie isn't Bond, and my illusions remain intact. And we get a safe glimpse as to how Connery, who did the best job of playing out Bond's unabashed chivalry, can inconspicuously transform into a brooding thief and still carry off the chemistry with a thirty-year old Zeta-Jones, in style.

Hi-tech gizmos, complicated heists, a simmering relationship between the two lead characters, and reputations at stake: Entrapment incorporates all these into its plot, and gives us a movie that you would find hard to take your eyes off for as long it lasts. Indeed, it is paced so well that it allows you take in every move of the lead artists with relish. But it's also the kind of movie that overlooks minor explanations in favor of a convoluted plot. Not that anyone would be seriously able to point out any flaws in the script, but then it is as implausible as they come.

An insurance agent Virginia (Catherine Zeta-Jones) is out to get a legendary thief, Robert Macdonald/Mac (Connery), as a Rembrandt painting goes missing. Our girl goes through the whole rigmarole of winning over Mac's confidence, and eventually plans a heist with him. Now, it turns out that Virginia is in it for real, and with the record set straight between the two, it's time for the biggest swindle of them all. But with shades of distrust remaining, will the two be able to pull it off?

The movie is worth your while if you are intrigued by the Connery-Jones bonding, and it has to be said that for all the eyebrow raising that followed this casting coup, the old man does behave himself - pardon the impertinence. Zeta-Jones has more than her share of moments, too. The scene where she is rehearsing the heist, blindfolded and making some really graceful moves (where did you come up with that Mr. Director?) is the real steal. In fact, the expression on Connery's face says it all. Need I say more?
Share. Save. Connect.
Tweet
ENTRAPMENT SNAPSHOT

ADVERTISEMENT
This page was tagged for
Entrapment english movie
Entrapment reviews
release date
Sean Connery, Catherine Zeta-Jones
theatres list
Follow @fullhyderabad
Follow fullhyd.com on
About Hyderabad
The Hyderabad Community
Improve fullhyd.com
More
Our Other Local Guides
Our other sites
© Copyright 1999-2009 LRR Technologies (Hyderabad), Pvt Ltd. All rights reserved. fullhyd, fullhyderabad, Welcome To The Neighbourhood are trademarks of LRR Technologies (Hyderabad) Pvt Ltd. The textual, graphic, audio and audiovisual material in this site is protected by copyright law. You may not copy, distribute, or use this material except as necessary for your personal, non-commercial use. Any trademarks are the properties of their respective owners. More on Hyderabad, India. Jobs in Hyderabad.