Dare Devil (Once Upon A Time In China And America) Review 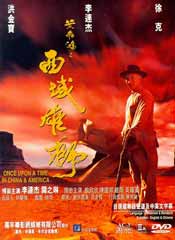 Kalyan Achanta / fullhyd.com
EDITOR RATING
3.0
Performances
Script
Music/Soundtrack
Visuals
NA
NA
NA
NA
Suggestions
Can watch again
NA
Good for kids
NA
Good for dates
NA
Wait to rent it
NA
Billy is alone, walking (actually dragging himself) in a deserted land. He is thirsty and exhausted, and just then sees a chain of carriages passing him, but alas, they will not help a stranger. Billy is now in a wretched state, and decides to end his life. He puts two pistols into his mouth (an overkill, you'd opine, pardoning yourself the pun). And just then a Real Man comes along and gives him new hope and succor.

This is how "Dare Devil - Once Upon a Time in China and America" starts off. Pretty familiar beginning, you'd think. Yes, it's déjà vu since you've seen that kind of drama in plenty of Indian cinema. Dare Devil is a movie with typical Tollywood characterization - a hero who is almost the Almighty, a heroine who is deeply in love with him (the hero, not the Almighty) and which happens to be her only activity in the movie, a mini-heroine who also falls for the hero impressed by his might and skill, a villain whose appearance talks about his character, a couple of comedians, and, of course, a Mr. Billy who happens to be rescued from a pitiable state by the hero and is indebted to him for life. Very homely film, this, you might say.

Wong Fei Hung (Jet Li), his fiancée Diana (Rosemund Kwan) and their obedient attendant Seven Riding are traveling via a stagecoach to San Francisco. On their way they pickup this desolate cowboy, Billy. A forest tribe then attacks them, and in trying to fend them off, Wong is swept by a river and reaches a Red Indian tribal village, only to find that he has developed amnesia (the typical "who am I" stuff).

The first half of the movie is all about how Diana and party search for her love and how the hero recollects his past. Amidst all this are several unrealistic (and perhaps fascinating, depending on what you are looking for) scuffles between the Chinese and Americans, the stuff of scissor-kicks vs. pistols. I call it unrealistic because the cowboys throw away their guns and opt for a kung-fu fight with the Chinese. And no matter what the good guy uses (usually scissor-kicks), he wins.

More unrealistic than the fights are the dialogues and especially the ease with which the tribes shift between English and their native language. The best part of the movie is the background score, which, though not original, sounds nice.

The movie develops some substance in the second half, when the mayor of the town (who is against the Chinese) and the villain (with a greasy mustache and deadly spinning spurs), conspire to loot the bank in the town. The blame and punishment are now put on these Chinese folks, and quite obviously Wong is one of them. The way Wong and party come out of this trouble is more unrealistic than the fights.

Dare Devil, though not very credible or sensible, is bound to evoke some laughter, and that could be its sole saving grace. Of course, this holds only for the non-Jet Li fans - fans don't need reasons to watch movies, right?
Share. Save. Connect.
Tweet
DARE DEVIL (ONCE UPON... SNAPSHOT
DARE DEVIL (ONCE UPON A TIME IN CHINA AND AMERICA) SNAPSHOT