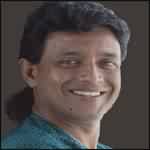 Kaushal Mishra / fullhyd.com
EDITOR RATING
1.0
Performances
Script
Music/Soundtrack
Visuals
NA
NA
NA
NA
Suggestions
Can watch again
NA
Good for kids
NA
Good for dates
NA
Wait for OTT
NA
Those of you who are (un)lucky enough to have a sister (and if she is unmarried), here's a warning. The next time you see her coming towards you, bright-eyed and wearing a charming smile, don't think for one tenth of a second, just run! Sisters are not what they look like; they are the personified version of everything that can go wrong with you, the cause of every misery you face, just to get themselves married. They will make you sacrifice your love, sell your house, work overtime, fight on the roads, put your "pagdi" at her father-in-law's feet, and much more.

No, these are not my words. This is what the director Jayant Gilatar (whoever he is) wants to say through this movie.

It all happens in a village somewhere (probably in Ooty where the producer pays Mithun the charge of the crew's stay in his hotel along with the acting fee). In the village live a poor potter Keshav (Mithun Chakraborthy) with his 18-year-old sister Mehndi (Rajeshwari Singh) and his father. The mother is dead (and the producer saves some money). To add to his woes, the sister is dumb (I mean, speech impaired) and the father is a useless dipsomaniac who uses every excuse under the sun to borrow money for his drinks.

Keshav's only ambition in life is to get his sister married, innovatively conveyed to you through his waking up every morning shouting, "Meri behen ki shaadi ho gayi, meri behen ki shaadi ho gayi!" In the little time that he gets between dreaming about his sister's marriage and carrying on his business, he manages to fall in love with a weaver's daughter called Janki (either Sindhu or Sheena, I could never make out who is who), and some irritating songs follow. He decides he will marry her after his sister's marriage.

But, there is another lady called Lajo who loves Keshav (and lifts her skirts a bit too high and bathes in the open to grab his attention). She has a mother and a brother in Dubai. Lajo's mother asks Keshav to marry Lajo in exchange for her son marrying Mehndi when he returns from Dubai. Keshav sacrifices his love for his sister and agrees (did you carry your tissues along?).

The Dubai boy returns with perfumes, colour TVs, music systems and an attitude, and refuses to marry a dumb girl. All hell breaks loose at this, Keshav vows to take "badla" and get his sister married to a better guy, and blah blah blah.

It is not much of a surprise because this is what you expect from a Mithun movie. What shocks you though is the presence of Rajeshwari Singh in the movie. I could never believe that an award winning actress of such talent who has worked with ace Hollywood director Martin Scorcese (The Godfather) and Keanu Reeves (The Little Buddha) could agree to do such a demeaning role.

ADVERTISEMENT
This page was tagged for
Meri Pyaari Bahania Banegi Dulhania hindi movie
Meri Pyaari Bahania Banegi Dulhania reviews
release date
Mithun Chakraborthy, Rajeswari
theatres list
Follow @fullhyderabad
Follow fullhyd.com on
About Hyderabad
The Hyderabad Community
Improve fullhyd.com
More
Our Other Local Guides
Our other sites
© Copyright 1999-2009 LRR Technologies (Hyderabad), Pvt Ltd. All rights reserved. fullhyd, fullhyderabad, Welcome To The Neighbourhood are trademarks of LRR Technologies (Hyderabad) Pvt Ltd. The textual, graphic, audio and audiovisual material in this site is protected by copyright law. You may not copy, distribute, or use this material except as necessary for your personal, non-commercial use. Any trademarks are the properties of their respective owners. More on Hyderabad, India. Jobs in Hyderabad.