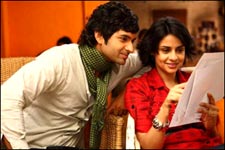 Kakoli Mukherjee / fullhyd.com
EDITOR RATING
4.0
Performances
Script
Music/Soundtrack
Visuals
6.5
5.0
5.0
4.0
Suggestions
Can watch again
No
Good for kids
No
Good for dates
No
Wait for OTT
Yes
Malleable morals, use of sex-therapy as often as cold pills, and the ruthless bitchiness of corporates - this is the world that Turning 30 is set in. A world which most career-oriented women in the country's metropolises may relate to - but only in parts.

Director Alankrita Shrivastava introduces a genre alien to Bollywood and provides an engaging watch, but forgets to fine tune it to Indian sensibilities and incorporate the right number of reality checks. And while women using the middle finger freely and enjoying a male strip-tease might appease bra-burning feminists, these props do nothing to highlight a woman's mid-life crisis.

Turning 30 is the story of Naina (Gul Panag) who is the creative director in an ad agency, and is in a stable relationship with boyfriend Rishabh (Siddharth Makkar). She has two buddy chums (Jeneva Talwar and Tilottama Shome) who offer her sane advice in life's every crisis, and a mother with whom she shares everything under the sun.

But Naina's perfect world is shattered when her boyfriend dumps her for a more convenient arranged marriage, and she loses her job when her pet project is hijacked by crooked colleagues. She finds herself single and jobless a week before turning thirty years old.

As Naina struggles to get over her ex-boyfriend, in walks Jay (Purab Kohli), who was her college sweetheart, and had one day suddenly disappeared to pursue his passion in photography. Naina uses Jay, and sex, as sanctuaries to escape from her turbulent life, but continues to be obsessed with Rishabh.

The story is also about her friends who grapple with their personal tragedies, as one of them declares in public that she is a lesbian, and the other struggles with a cheating husband.

Turning 30 could have been a probing commentary on modern, hedonistic life, but it suffers from some basic flaws. For one, the portrayal of the 21st century woman is myopic and over-dramatised. Though you can easily relate to the ignoble colleagues and the pangs of heart-break, all of them happening at once at breakneck speed in her life has to be taken with a pinch of salt.

Then, the way the director quick-fixes everything in Naina's life in the last half-an-hour - including the ex-boyfriend turning up for an apology - does not seem anything less than a miracle, a chickening out which stands out particularly since the protagonist herself laments in the first half that life is not a fairytale.

Also, the concept and contents of the film are as original as Anu Malik's tunes. The feeling of deja vu starts right at the beginning as the movie opens with a scene of 3 urban women gambolling in a bathtub and puffing away at cigarettes, and Sex And The City and Bridget Jones' Diary alerts start ringing in your head. As the film progresses, it not only confirms those alerts, but also shows hangovers of the book Almost Single by Advaita Kala, and the Cameron Diaz starrer The Sweetest Thing (Panag is stressed out about her sagging breasts, too, and the mirror scene is a rip-off).

Lastly, though the movie showcases the lives of freewheeling and emancipated women, one of the characters resigning herself to her husband's infidelity without any protest contradicts the theme of the movie itself.

Gul Panag does a decent job pulling off the grey-streaked Naina, but we wish there had been someone with a more aggressive body language. Jeneva Talwar and Tilotamma Shome (of Monsoon Wedding fame) are good in their limited roles. The male leads in the movie (Siddharth Makkar and Purab Kohli) have nothing much to do, though Kohli leaves an impression with his boyish charm and his unflinching devotion to Naina. Ira Dubey shines even in a short cameo.

The music of the film is good and hummable, and helps to take the narrative forward. The costumes and styling create a perfect picture of urban chic, and cinematographer Akshay Singh makes the characters look good.

Turning 30 is strictly for the multiplex audiences who relate with the fast-paced, contemporary lifestyle shown onscreen, and they might end up being grateful for all the things there that could have happened to them but did not. Watch this one if you are in the mood for a saucy interpretation of a chick novel.
Share. Save. Connect.
Tweet
TURNING 30!!! SNAPSHOT

ADVERTISEMENT
This page was tagged for
Turning 30!!! hindi movie
Turning 30!!! reviews
release date
Gul Panag, Jeneva Talwar
theatres list
Follow @fullhyderabad
Follow fullhyd.com on
About Hyderabad
The Hyderabad Community
Improve fullhyd.com
More
Our Other Local Guides
Our other sites
© Copyright 1999-2009 LRR Technologies (Hyderabad), Pvt Ltd. All rights reserved. fullhyd, fullhyderabad, Welcome To The Neighbourhood are trademarks of LRR Technologies (Hyderabad) Pvt Ltd. The textual, graphic, audio and audiovisual material in this site is protected by copyright law. You may not copy, distribute, or use this material except as necessary for your personal, non-commercial use. Any trademarks are the properties of their respective owners. More on Hyderabad, India. Jobs in Hyderabad.