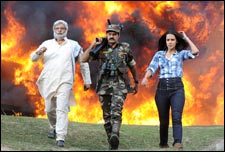 Deepa Garimella / fullhyd.com
EDITOR RATING
2.5
Performances
Script
Music/Soundtrack
Visuals
4.0
2.0
5.0
4.5
Suggestions
Can watch again
No
Good for kids
No
Good for dates
No
Wait for OTT
No
We usually don't have a problem with political campaigns masquerading as cinema, but we do have issues with utter tripe masquerading as cinema. So while we understand Balakrishna's message of the season ("I will be CM shortly"), being assaulted by movies like Parama Veera Chakra is something else altogether.

PVC starts off no different from one of those telefilms about government schemes. Its enthusiasm makes even that tolerable, but soon, the flick unfolds into what it really is - a really bad Dasari Narayana Rao movie.

The hero of PVC is Chakradhar (Balakrishna), the reigning superstar of Telugu filmdom. If you didn't get it, this character was written into the flick just to show us the awesomeness of the powerful yet down-to-earth star; a star who, by way of his films, espouses the noble causes of 1) Nandamuri Balakrishna becoming CM, 2) the Telangana struggle, 3) the khaki-clad labour classes, 4) film distributors who don't recover money from films that flop, and 5) in case you forgot, Nandamuri Balakrishna becoming CM.

Then enter a bunch of military leaders (Murali Mohan, Vijay Kumar, etc.), who want him to make a film about a character called Major Jay Simha (Balakrishna). Jay Simha is a highly-patriotic man, who has nabbed the country's most-wanted terrorists. Sadly, he has, somehow, been framed as a deshdrohi, thanks to some crooked politicians and army men.

The flick completely rides on Balakrishna, but he can pander to his fans only so much, and can't resuscitate the movie. The fun, campy Balayya moments and hard-hitting dialogues last only for a while, until the movie slips into the old-fashioned Jay Simha story.

Plus, there are only a few of his science-defying stunts, the most notable among them being the one in which he kicks a man onto a car's door and the victim emerges out of the door on the other side, having smashed the car's interiors all the way.

The whole experience is severely downgraded in the second half, with cliched characters (that are both lousily written and lousily executed), bad set design, pointless songs, and more.

Even if the film had Balakrishna constantly reading out his party's manifesto and blaming the current government for society's ills, there'd have been something for the front-benchers to cheer about. Instead, there are stretches of melodrama and sheer idiocy that are so ridiculous that it is the Brahmanandam-Ali-Hema spoof on Robot - even if cheesy and vulgar at times, with the robot being named after an undergarment - that saves the day.

The ladies - Sheela, Ameesha Patel and Neha Dhupia - are in this just for the nymphomania, some fake weeping, and pointless skin show, in that order.

Murali Mohan and Vijay Kumar have probably winced at their B-movie style roles, and Jayasudha is probably thankful she only has a brief role (one that, nevertheless, gets to say a crowd-rousing "Annagaari maata nilabettaavu" dialogue to the hero in the end). Meanwhile, Dasari brings in a dozen cameos by Tollywood heavyweights (Ramanaidu and Singeetham Srinivasa Rao included), all of who surely have better movies to cameo in.

Manisarma's music is probably a notch or two above the whole movie, but unfortunately, no one's noticing.

See Parama Veera Chakra full details
TOP COMMENT
Sandeep on 13th Jan 2011, 9:51pm | Permalink
When a flop director pairs with a flop here the film becomes a big Disaster and that is what exactly PVC is about...I wonder why Dasari Narayana Rao still takes up direction. What does he want to prove??

RATING
1
Sandeep on 13th Jan 2011, 9:51pm | Permalink
When a flop director pairs with a flop here the film becomes a big Disaster and that is what exactly PVC is about...I wonder why Dasari Narayana Rao still takes up direction. What does he want to prove??

ADVERTISEMENT
This page was tagged for
parama veera chakra movirulz
parama veera chakra dvd casits
parama veera chakra telugu full movie balakrishna
Parama Veera Chakra Telugu full movie come
Parama Veera Chakra Telugu full movie
Follow @fullhyderabad
Follow fullhyd.com on
About Hyderabad
The Hyderabad Community
Improve fullhyd.com
More
Our Other Local Guides
Our other sites
© Copyright 1999-2009 LRR Technologies (Hyderabad), Pvt Ltd. All rights reserved. fullhyd, fullhyderabad, Welcome To The Neighbourhood are trademarks of LRR Technologies (Hyderabad) Pvt Ltd. The textual, graphic, audio and audiovisual material in this site is protected by copyright law. You may not copy, distribute, or use this material except as necessary for your personal, non-commercial use. Any trademarks are the properties of their respective owners. More on Hyderabad, India. Jobs in Hyderabad.