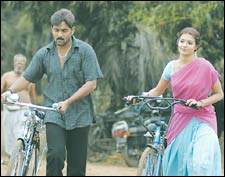 Himabindu Chitta / fullhyd.com
EDITOR RATING
5.0
Performances
Script
Music/Soundtrack
Visuals
NA
NA
NA
NA
Suggestions
Can watch again
NA
Good for kids
NA
Good for dates
NA
Wait to rent it
NA
The danger of drowning in a sea of Tarun fans is very real and very frightening. It's worse yet if you personally think he is a juvenile delinquent. But, the Lord be praised, no one can read your mind, and so as long as you gulp him down like bitter medicine, no one's the wiser. And anyway, the important thing is to stay alive until the intermission, when the real fun begins.

Oka Oorilo itself is quite a cheery affair, becoming soppy only in the last half hour. Admittedly, all the clichés (and even Tarun) don't prevent this one from being entertaining. So we set off on our cinematic journey with little Lalitha (Saloni) and Srinu (Tarun) being very downcast when their best friend Ravi moves to Hyderabad. But time heals (especially when you are a 7-year-old), and by the time the trio is entering college, Srinu and Lalitha are deeply in love.

Of course, odd roadblocks like a motorcycle-wielding baddie threaten to disrupt the romance, but nothing serious happens until Srinu's dad, intent on marrying him off elsewhere, decides to send him to America. Our filthy rich, spoilt brat of a hero won't hear of it, so he runs off, his girl in tow, to Hyderabad.

Girls, keep your heart in check, 'cos come intermission and you'll get a whole lotta Raja, biceps, bike and dimples all in picture-perfect placement. One never ought to do a scene with a guy who can make you look like an overgrown toad - unless he's the villain. Unfortunately for Tarun, Raja isn't the villain; he's Ravi, Srinu's long-lost friend. In the big bad city, Ravi comes to the aid of the lost lovers, and gets Srinu a job.

But for a guy who's always had the world handed to him on a dainty silver platter, it ain't so easy to even get off his lazy ass, far less earn a decent living. So Srinu takes the easy way out - go back home. He tries to cajole Lalitha into coming with him, but she is adamant about leading an independent life. And so the next morning he disappears, and soon they hear that he has pushed off to the US of A leaving Lalitha in the lurch.

Where is Srinu? What is to become of the betrayed Lalitha? Why do cultured, pretty girls inevitably and mysteriously fall for the biggest losers in a radius of two miles? These and other questions about love and friendship are answered in the remainder of the cinema. This, as you might have guessed, is the sniveling part, but that's only if Tarun figures in your patheon of gods. If not, rest easy, roll over and get some shut-eye.

Tarun is at his dramatic best in the role of a monkey, er, monkeyish-boy who comes of age. The sensible character of Ravi is a refreshing change from the staid and stereotyped supporting heroes that you are used to. Saloni is quite palpable as the innocent but brave village damsel Lalitha.

The plot is not full of holes, which, for a mass Telugu movie, is an accolade in itself. The verdant green of the village, the boats and the bicycles are a relief from the usual people in glass houses. The drama at the end is thoroughly clichéd and tear-jerking to the core. More pain, more gain.

A good movie to watch with the family. Not a classic, but definitely has mass appeal.
Share. Save. Connect.
Tweet
OKA OORILO SNAPSHOT