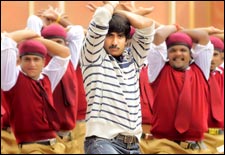 Deepa Garimella / fullhyd.com
EDITOR RATING
7.0
Performances
Script
Music/Soundtrack
Visuals
8.0
6.0
6.0
7.5
Suggestions
Can watch again
No
Good for kids
Yes
Good for dates
Yes
Wait to rent it
No
He's no teenager (as the man himself points out in Mirapakaya), but he's one star who you probably don't want to age any further - for a long, long time.

Mirapakaya is a simple action-comedy, with goons, guns, screaming, cops, and a pair of nothing heroines. But somehow, you don't seem to mind the monotony of Tollywood's villainy, Prakash Raj's zillionth role as an exotic don, the over-simplified romances, or anything else, actually.

Simply because the man in the middle of it all is doing his own thing, shooting his mouth away and personifying the exceptional combination of tremendous screen presence and marvellous comic timing.

And because just like at the end of most Ravi Teja movies, it feels like a tornado carrying a bunch of blaring boom boxes in its eye just hit the screen.

The story has a touch of Main Hoon Na to it, with Rishi (Ravi Teja), an Intelligence Bureau officer being sent for an undercover operation to Hyderabad. He must play the role of a teacher in a college there, so this is where his journey as a Hindi lecturer starts.

It's not much of a script, and nowhere close to novelty. But then, you don't really complain, thanks to the towering - and very loud - presence of Ravi Teja. The villain track is central to the film, but though overdone, Kota Srinivasa Rao's fine moments with the hero make it worth sitting through. The college comedy is fun as well. The fights are boring, though.

Sunil and Brahmaji shine during their respective slots of airtime, but they could have been given more. Basically, everyone in the film is a prop for Ravi Teja to spew his trademark irreverent wit and sarcasm, and it works.

One of the negatives of the film is the romance involving Richa Gangopadhyay's character. The actress plays a "traditional Brahmin girl" (whose life revolves around classical music, obviously). It's a character a version of which Ravi Teja has had incredible chemistry with earlier; but Gangopadhyay is not a patch on Asin (then again, these are her early days in filmdom).

She is a misfit in the role, and also, her dubbing hasn't been taken care of - so what could have been an immensely enjoyable love story crashes.

On the other hand, Deeksha Seth, the other leading lady, is wasted. Even though she has her rough edges, she's spirited, spontaneous and unaffected, quite unlike the mannequin-like Gangopadhyay.

Mirapakaya is a slicker production than some of the current crop. Bright visuals and a couple of tastefully-choreographed songs make this a pleasant watch. The music might not be chartbuster material, but there are a few interesting tunes thrown in.

A much better offering than what the other biggies have thrown our way (Nagavalli, Ragada and Parama Veera Chakra being a few) this season, Mirapakaya's one for the happy festivities.
Share. Save. Connect.
Tweet
MIRAPAKAYA SNAPSHOT


Pros: ravi teja acting and some stunts
Cons: same formulaic story and songs are not up to the mark

RATING
10
saradhi on 18th Jan 2011, 10:53am | Permalink
Movie is not bad. Not also an excellent one. A time pass movie. God! after a long time we could see the female leads clearly in this movie. Otherwise except skin show and lean heroines are boring. These two girls are chubby and got some good looks too. This movie is all and all Raviteja Movie. Don't expect anything else. Just go for his comedy. A couple of songs were good. Although over made up, Richa looks beautiful.

ADVERTISEMENT
This page was tagged for
Mirapakaya telugu movie
Mirapakaya reviews
release date
Ravi Teja, Richa Gangopadhyay
theatres list
Follow @fullhyderabad
Follow fullhyd.com on
About Hyderabad
The Hyderabad Community
Improve fullhyd.com
More
Our Other Local Guides
Our other sites
© Copyright 1999-2009 LRR Technologies (Hyderabad), Pvt Ltd. All rights reserved. fullhyd, fullhyderabad, Welcome To The Neighbourhood are trademarks of LRR Technologies (Hyderabad) Pvt Ltd. The textual, graphic, audio and audiovisual material in this site is protected by copyright law. You may not copy, distribute, or use this material except as necessary for your personal, non-commercial use. Any trademarks are the properties of their respective owners. More on Hyderabad, India. Jobs in Hyderabad.