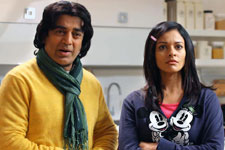 Vishwaroopam is a Kamal Hasan film minus the megalomania. Which, in retrospect, was a bad idea, since the movie is now only slightly more interesting than a documentary on making documentaries. To call Vishwaroopam a "thriller" would be about as accurate as calling Manmohan Singh a stuntman, so you can put the seatbelts away.

Kamal Hasan opens his act by playing an effeminate dance teacher Viswanath, whose exaggerated femininity makes his wife, Dr. Nirupama (Pooja Kumar), cringe. Nirupama, "understandably," has an extra-marital fling with a boss who makes shady payments to the Middle East. Nirupama has no clue that something is wrong.

Meanwhile, she has also set a private eye to snoop around in Viswanath's life. The private eye stumbles upon something strange, but things get stranger from here on.

Vishwaroopam deserves appreciation for dealing with the issue of terrorism head-on and in such detail. The film spends half its time in an Afghan hideout - where people speak Arabic and not the strange Telugu-Deccani mix that our directors would have us believe - and these are the meatiest parts of the story. Rahul Bose shares the limelight with Kamal Hasan here, in a poignant narrative that weaves together two sides of the terror coin - the morbidity of jihad, and the tragedy of the death of innocents.

The terror outfit in question comprises men and boys who are groomed from a very young age - as depicted by a little boy who hasn't learnt to shave yet but can recognize the make of a gun while blindfolded. The men look at themselves as warriors, and not as antagonists of world peace. Behind their seething bitterness is the pain of loss, and a need for "revenge".

Kamal attempts an intelligent conversation about the subject of terror, but he doesn't make it very interesting. He's telling us things about terror we already know, in a way that doesn't exactly change your life. The whole spy thing is not very thrilling anyway. One of the few times Kamal excites audiences is when he breaks out of his womanish act and suddenly starts kicking butt. For a movie touted as an action masterpiece, such moments are too few and far between.

The movie, on the whole, has the consistency of molten lead - it is dead s-l-o-w. By the time the interval lumbers in, you feel a week older. Ironically, the movie's ending feels incomplete, and there is no sense of closure when the credits roll.

Kamal Hasan, well, is as Kamal Hasan as Kamal Hasan can be. There are no facial contortions, thankfully, except for the dance teacher segment, which, frankly, can be freaky to watch since the man has aged now. In the rest of the movie, though, he is disappointingly understated.

Rahul Bose has a lot of screentime, and is good to watch. Nasseer is a fine actor, as always, and Shekhar Kapur is good, but doesn't have much to do. Pooja Kumar is expressive, but her dubbing can get slightly artificial and annoying.

Kamal's attention to detail is pretty evident in the way the Afghan villages have been recreated and shot. The villages look legit, the mountains are gorgeous, the dressing is authentic, and the bombing scenes have been executed well. However, the parts that are shot in New York (or whatever was passed off as NYC) are bleak, wintry and gloomy, lacking the vibrancy of Middle Eastern turf.

The songs aren't distractions, and are suitably woven into the movie. The title song can become an earworm, though.

Meanwhile, all the fuss over all the "objectionable" content is misplaced, unless you think discussing al-Qaeda is taboo. (Although, if you ask us, Manmohan Singh might want to protest against his voice being mimicked in a phone conversation between Vishwaroopam's protagonist and "the Indian PM"... for being more life-like than in real life.) The violence and the depiction of blood are quite graphic (while not very aesthetically shot), and you might want to keep the kids at home.

Watch Vishwaroopam if you're a die-hard Kamal Hasan fan. The rest can wait to catch it on television.
Share. Save. Connect.
Tweet
VISHWAROOP (HINDI) SNAPSHOT 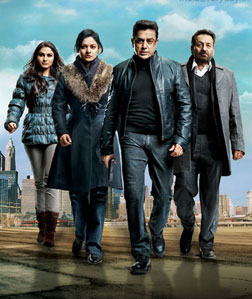 ADVERTISEMENT
This page was tagged for
vishwaroopam full movie in hindi
vishwaroopam full movie in hindihindi
vishwaroop movie in hindi
visvroopHindi movi boollwod2018
Vishwaroop (Hindi) hindi movie
Follow @fullhyderabad
Follow fullhyd.com on
About Hyderabad
The Hyderabad Community
Improve fullhyd.com
More
Our Other Local Guides
Our other sites
© Copyright 1999-2009 LRR Technologies (Hyderabad), Pvt Ltd. All rights reserved. fullhyd, fullhyderabad, Welcome To The Neighbourhood are trademarks of LRR Technologies (Hyderabad) Pvt Ltd. The textual, graphic, audio and audiovisual material in this site is protected by copyright law. You may not copy, distribute, or use this material except as necessary for your personal, non-commercial use. Any trademarks are the properties of their respective owners. More on Hyderabad, India. Jobs in Hyderabad.