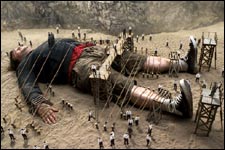 Mallik Thatipalli / fullhyd.com
EDITOR RATING
4.0
Performances
Script
Music/Soundtrack
Visuals
5.0
4.0
5.0
8.0
Suggestions
Can watch again
No
Good for kids
Yes
Good for dates
No
Wait to rent it
Yes
If Gulliver's travels were among your favorite stories as a kid, you might do well to sit this one out. An adaptation of the 18th century classic by Jonathan Swift, the movie tries hard to work but falls short of the mark despite the hype surrounding it, thanks to the lack of a cohesive script and some much needed editing even though the running time is just about an hour and half.

In a classic case of casting gone awry, Lemul Gulliver, the lead character, is played by Jack Black, who essays the role of a mail room worker who turns a castaway on a lonely island after a ship wreck, and runs into the six-inch Lilliputians inhabiting the place, who initially mistake him for an enemy before he turns into their savior and helps them against their enemy General Edward (Chris O'Dowd). The comic timing of Gulliver should have brought the house down, but is a major let down as Black just does not fit into the role of a lovable bumbling hero.

The film has a mix of adventure and fantasy which should have been ideal for a family outing with the kids, but it doesn't turn out that way. And the climax, where everything should have been sorted out, leaves a bad taste because of its hasty execution and lack of a logical sequence. However, some parts of the movie, like the one where the Lilliputians try and take Gulliver down, are well shot (with great effects) - that sequence is also one of the very few instances where the audiences are engrossed in the narrative, which otherwise is monotonous and uninteresting.

The positives of the movie are that the special effects manage to hold heir own and are smartly interwoven into the story, the supporting cast raises some laughs, and since the viewer is well versed with the story, the narration is not repetitive. However, the film's greatest flaw lies in the fact that it comes in with enormous expectations and cannot do justice to them. Also, the screenplay leaves much to be desired, and the comedy fails to bring a smile onto the faces of the audience.

Bottom line: try to read the book and skip the movie. It's a lot cheaper, too.
Share. Save. Connect.
Tweet
GULLIVER'S TRAVELS - 3D SNAPSHOT

ADVERTISEMENT
This page was tagged for
Gulliver's Travels - 3D english movie
Gulliver's Travels - 3D reviews
release date
Jack Black, Billy Connolly
theatres list
Follow @fullhyderabad
Follow fullhyd.com on
About Hyderabad
The Hyderabad Community
Improve fullhyd.com
More
Our Other Local Guides
Our other sites
© Copyright 1999-2009 LRR Technologies (Hyderabad), Pvt Ltd. All rights reserved. fullhyd, fullhyderabad, Welcome To The Neighbourhood are trademarks of LRR Technologies (Hyderabad) Pvt Ltd. The textual, graphic, audio and audiovisual material in this site is protected by copyright law. You may not copy, distribute, or use this material except as necessary for your personal, non-commercial use. Any trademarks are the properties of their respective owners. More on Hyderabad, India. Jobs in Hyderabad.