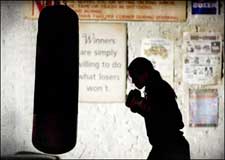 Preetam Akkineni / fullhyd.com
EDITOR RATING
8.0
Performances
Script
Music/Soundtrack
Visuals
NA
NA
NA
NA
Suggestions
Can watch again
NA
Good for kids
NA
Good for dates
NA
Wait for OTT
NA
"An old master's new masterpiece" is the phrase thrown around after every single Eastwood release. It is the only way we can sum up Eastwood's phenomenal career. 74 and still always in the news. He never glorifies his characters, he never has a stifling "trailer-made" plot, he emotionally overwhelms, he leaves out the obvious and the clichéd, and, most of all, he always delivers near-flawless movies. This one probably was the best bet for Hollywood last year. And it turned out to be a million-dollar baby for the studio that produced it.

The story sees Eastwood run a beat-down gym, with friend and former student Freeman. The gym isn't doing too well, and their best fighter has just walked out on them.

Swank is the young woman with more heart than experience. Although he only agrees to train her in the start, he goes on to devote his entire life to her. It is not just a story of an underdog winning championships, it's a story of achievements, hope, redemption, and a dozen other clichés that Hollywood regularly throws around.

Million Dollar Baby is dark, edgy and underplayed. The characters seem to be constantly battling with themselves over right and wrong, past and present, good and evil. The changes in the general mood of the movie are nudged by cinematographer Tom Stern's subtle shadow play. Then actors are frequently in the shadow, shifting in and out of light.

The background score, like in every other Eastwood movie, is poignant, and always better with the visuals. More interesting than the actual boxing scenes (perfected in Raging Bull) is the verbal sparring between Eastwood and Freeman. There cannot be two actors with more difference in the kind of screen presence that they possess.

Like all previous Eastwood movie actors Swank speaks more through her eyes than her lines. She might be unwittingly slotting herself in such characters, but as long as she picks movies like this, we'll watch her again and again.

Eastwood's own screen presence is so amazing that every time he opens his lips to something, you lean forward hoping to memorize the lines for eternity. Unfortunately, Eastwood's whisper-loud dialogue delivery does more harm than good to the movie, as some lines are clearly inaudible.

Morgan Freeman's performance is a lot like Red from Shawshank Redemption. The movie for which he should've won an Oscar. In comparison, this one doesn't seem as worthy.

The class of the movie hits you with quality jabs and amazing one-two punches that can only be delivered by an old veteran with as much passion for the craft as Eastwood has.
Share. Save. Connect.
Tweet
MILLION DOLLAR BABY SNAPSHOT

See Million Dollar Baby full details
MILLION DOLLAR BABY USER REVIEWS
1 - 2 OF 2 COMMENTS
POSITIVE  |  NEGATIVE |  NEWEST  |  OLDEST  |  MOST HELPFUL  |  LEAST HELPFUL
USER RATING
8.4
9 USERS
Performances
Script
Music/Soundtrack
Visuals
NA
NA
NA
NA
Can watch again - NA
Good for kids - NA
Good for dates - NA
Wait for OTT - NA
Preetam Akkineni on 15th Apr 2005, 10:19pm | Permalink
Thanx for your feedback, Aishwarya. I definitely agree that this isn't Eastwood's best. His best is either Unforgiven or a movie that he will make.
RATING
8
Aishwarya Mantha on 15th Apr 2005, 9:13pm | Permalink
Well, I think it is Hillary Swank who deserves all the credit.The plot isnt different, the emotions and reactions are not so special either.Morgan freeman was'nt even required in the movie althoug he did win an oscar for that.I suppose he was given oscar based on his cummulative performance in all his previous movies.Eastwood is no doubt a very good director but this movie isnt his best.Like "sideways" it is all hype.

But yeah, hillary swank did a great job.Reminded me of the her previous movie "'Boys dont cry".She is absolutly amazing and it is her performance that gives the entire movie some legitamacy and makes it more genuine.

ADVERTISEMENT
This page was tagged for
Million Dollar Baby english movie
Million Dollar Baby reviews
release date
Clint Eastwood, Hillary Swank
theatres list
Follow @fullhyderabad
Follow fullhyd.com on
About Hyderabad
The Hyderabad Community
Improve fullhyd.com
More
Our Other Local Guides
Our other sites
© Copyright 1999-2009 LRR Technologies (Hyderabad), Pvt Ltd. All rights reserved. fullhyd, fullhyderabad, Welcome To The Neighbourhood are trademarks of LRR Technologies (Hyderabad) Pvt Ltd. The textual, graphic, audio and audiovisual material in this site is protected by copyright law. You may not copy, distribute, or use this material except as necessary for your personal, non-commercial use. Any trademarks are the properties of their respective owners. More on Hyderabad, India. Jobs in Hyderabad.