Nupur Barua / fullhyd.com
EDITOR RATING
4.0
Performances
Script
Music/Soundtrack
Visuals
5.0
3.0
5.0
6.0
Suggestions
Can watch again
No
Good for kids
No
Good for dates
Yes
Wait for OTT
Yes
Horror, as a genre, used to be broad category that covered all types of supernatural elements, psychotic incidents, black magic, witchcraft and so on. The possibilities, at least for feature films, were immense, and exciting. Look at the plethora of great and terrible movies the Indian film industry has given us over the decades.

Now, however, a horror movie is a synonym for "found-footage" film, and The Blair Witch Project must be turning in its grave with all the inspiration that it has unknowingly handed out to filmmakers across the universe. The latest to jump in is Bharat Jain, who has remade the Kannada movie 6-5=2 in Hindi.

The gist of the plot is "strange happenings". While there is nothing unusual about a group of friends going on a trek to some godforsaken forest, you, as the audience, already know that this is maybe not such a great idea. Siddharth (Prashantt Guptha), Bhanu (Ashrut Jain), Raja (Gaurav Paswalla), Harsh (Gaurav Kothari), Suhana (Disha Kapoor) and Priya (Niharika Raizada) walk into the dense jungles somewhere near Mysore, with the intention of documenting their trek.

Siddharth is the guy with the camera, and he has to make sure that recording everything they see is his only priority, no matter what they come across. The six of them fool around a bit in the jungle, in the arrogant belief that they are invincible, in a way. Raja is the more sorted one, and it is his relatively superior intellect that makes him the unnamed leader of the group, although Siddharth is clearly the alpha male here. As they go deeper into the forest, they come across evidence that they are in danger - from evil.

How many of them will survive the superior forces of evil? How many of them will live to tell the tale? Or will this be just another case of disappearing youngsters with nothing but a recorded video that is waiting to be found? To find out, you have to watch the rest of the movie.

Nothing much happens in the first half of the film. The characters are set up, and all they keep doing is venturing farther into the thick jungle. This gets monotonous after a while, and the forced humour cannot sustain your interest for too long. For a found-footage film, the screenplay follows a pretty foreseeable sequence of events. The dialogues, passing under the guise of extempore chit chat, are so monotonous and inane that you switch off after a point.

The horror then begins, at the exact moment that you predict it will. Then it becomes a race to survive, but you are seriously not interested in the unravelling of the plot. There is not much that is scary. The end, when it comes, is very slightly unexpected, but nothing extraordinary. The movie is promoted as one that has been shot by the late Siddharth, so you already know the outcome, but it can still surprise you.

The cast is relatively new. They try their best to live up to expectations, but it is difficult to "act out" a true story, as the makers would have us believe. The dialogues are so poor that they could only have been scripted. Of the lot, Gaurav Kothari is a familiar face, having modelled a bit. Prashannt Guptha hogs a lot of the limelight in the film, but the others make their presence felt as well.

The forest, which is the main setting for the movie, is an apt one for a horror setting. The camera works its wonders as it uses different lighting techniques to bring to life the fear of the unknown. A few visual effects are worth watching out for. The costume and make up is effective, in parts. The long periods of inactivity and silence are intentional, but can get annoying at times - the editor seems to have overdone it with such sequences. The sound effects are eerie in certain portions of the movie.

As we mentioned, there is nothing in the movie that has not already been done before. Even if the Kannada original was a hit, it is unlikely that Hindi movie audiences will warm to this film too quickly. Filmmakers interested in this genre need to come up with fresher, more unique ideas to really scare us.
Share. Save. Connect.
Tweet
6-5=2 (HINDI) SNAPSHOT 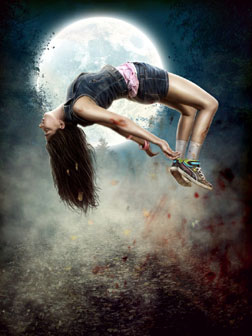 ADVERTISEMENT
This page was tagged for
6-5=2 movie in hindi
6-5=2 hindi
6 5 2 full movie in hindi
6 5 2 in hindi
6 5 2 full movie
Follow @fullhyderabad
Follow fullhyd.com on
About Hyderabad
The Hyderabad Community
Improve fullhyd.com
More
Our Other Local Guides
Our other sites
© Copyright 1999-2009 LRR Technologies (Hyderabad), Pvt Ltd. All rights reserved. fullhyd, fullhyderabad, Welcome To The Neighbourhood are trademarks of LRR Technologies (Hyderabad) Pvt Ltd. The textual, graphic, audio and audiovisual material in this site is protected by copyright law. You may not copy, distribute, or use this material except as necessary for your personal, non-commercial use. Any trademarks are the properties of their respective owners. More on Hyderabad, India. Jobs in Hyderabad.