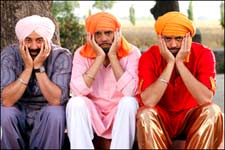 Kakoli Mukherjee / fullhyd.com
EDITOR RATING
5.0
Performances
Script
Music/Soundtrack
Visuals
6.0
5.0
3.0
5.0
Suggestions
Can watch again
No
Good for kids
No
Good for dates
No
Wait for OTT
Yes
Watching Yamla Pagla Deewana is like eating chicken chowmein at a trashy Chinese joint. You get to bite into chicken nuggets after ingesting a lot of bland chowmein, and while the taste entices you as long as it lasts in your mouth, the journey to the next juicy bite wading through stale vegetable pieces and washy sauces grows painfully tedious.

Though based on the lost-and-found formula of Hindi cinema, Yamla Pagla Deewana does not dwell much on the losing and finding part, but goes on to cash in on the intended USPs of the film: the camaraderie of the three Deols, and the nostalgia Dharmendra evokes.

So we don't see elaborate sequences on how Dharamveer Singh Dhillon (Dharmendra) steals his younger son Gajodhar (Bobby Deol) from his mother (Nafisa Ali) after she decides to part ways from him, fed up by his meandering ways. Nor do we see the elder brother Paramveer Singh (Sunny Deol) wearing out his shoes when he comes searching for his estranged father and brother from Canada at the behest of his mother. Gajodhar is the first man Paramveer meets in India, and after some banal searching, he finds his father, too.

Dharamveer, by this time, has brought up his son to be a notorious crook like himself, and both of them go around conning Banaras. The first half of the film shows the father-son duo pull off gags and spoofs on extraordinarily trusting people, and dancing in raunchy numbers with outrageous lyrics.

The upright elder son decides to bring the wayfarers home, and in order to win their trust, becomes a partner in their crimes after a superlative show of brawn. The younger son soon falls in love with a girl called Saheba (Kulraj Randhawa), who has a bunch of goons for brothers. The second half goes on to narrate how the trio wins over the burly brothers, and unites the family.

With a storyline as tested and simple as this, there was a need for crisper writing and well-sketched characters to keep the audience engaged, however, the intermittent good jokes cannot hold together the flow, and the trite situations further handicap the stereotype characters.

One of the major setbacks in the movie is the half-baked romance between Bobby Deol and debutante Kulraj Randhawa, which lacks both in chemistry and in emotional quotient.

After a yawn-fest first half, the second half does pick up in pace with a few hilarious moments involving the uncouth brothers, and more goon-bashing by the Hulk-like Sunny.

Though it's nice to see Dharmendra sportingly taking up the role of a casanova well past his prime, he suits the character about as much as a square peg does a round hole. He ends up looking burnt-out at times, and fails to impart the risque edge to the philandering Dharamveer. Bobby Deol keeps the joie de vivre in the film intact, and is used liberally everywhere that the other Deols cannot fit in (dancing, romancing).

But the most convincing performance is delivered by Sunny Deol, who gets into the character of the magnanimous, villain-thrashing Sardar like a second skin. The unabashed, unreal show of muscle-flexing does not look laboured on him, and the elder Deol scores grandly in his comfort zone.

Another endearing act is put up by Sucheta Khanna as Poli, Saheba's sister, who plays an exuberant Punjabi girl besotted with Canada.

Anupam Kher, leading the pack of the burly brothers, looks and sounds every bit his part, while Kulraj Randhwa, though attractive, needs to work on her screen presence.

Nafisa Ali, appearing only in a couple of scenes, is good. Emma Brown, as the cantankerous Canadian wife of Sunny Deol spewing Punjabi cuss words, is impressive.

Despite half a dozen music directors composing the tracks for the movie, it´s only the the title number inspired by a song from Dharmendra's film Pratiggya that can pass off as decent.

Give this one a shot only if you are a true-blue Deol fan, or have been missing a full-bodied Sunny Deol performance for a while.
Share. Save. Connect.
Tweet
YAMLA PAGLA DEEWANA SNAPSHOT

ADVERTISEMENT
This page was tagged for
Yamla Pagla Deewana hindi movie
Yamla Pagla Deewana reviews
release date
Dharmendra, Sunny Deol
theatres list
Follow @fullhyderabad
Follow fullhyd.com on
About Hyderabad
The Hyderabad Community
Improve fullhyd.com
More
Our Other Local Guides
Our other sites
© Copyright 1999-2009 LRR Technologies (Hyderabad), Pvt Ltd. All rights reserved. fullhyd, fullhyderabad, Welcome To The Neighbourhood are trademarks of LRR Technologies (Hyderabad) Pvt Ltd. The textual, graphic, audio and audiovisual material in this site is protected by copyright law. You may not copy, distribute, or use this material except as necessary for your personal, non-commercial use. Any trademarks are the properties of their respective owners. More on Hyderabad, India. Jobs in Hyderabad.