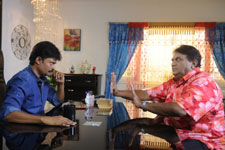 Kritika Deval / fullhyd.com
EDITOR RATING
4.0
Performances
Script
Music/Soundtrack
Visuals
6.0
2.0
5.0
5.5
Suggestions
Can watch again
No
Good for kids
No
Good for dates
No
Wait for OTT
Yes
The Telugu film industry deserves to have fun poked at it. It brims with so much preening and posturing and idiocies of all sorts that there is little space for that bafflingly rare commodity called sense. It is certainly easy to laugh at our cinema, and it should be equally easy to do so with a little bit more nuance than the cinematic equivalent of pointing your finger at something and going "Ha ha! That's funny!".

The makers of the provocatively titled A Shyam Gopal Varma Film don't seem to think so. Therefore, despite the disclaimer marking the beginning of the movie, the heroine (Zoya Khan) is named Sharmila, whom the oh-so-subtly christened Shyam Gopal Varma (Shafi) turns into his muse. Big directors try to move heaven and earth (literally) to cater to the whims of the fan-inflated egos of "Giga"-stars. Competing filmmakers decry each others' work as being copies while proclaiming their own works as being the result of "inspiration". An actress delivers a post-preview interview in an atrociously Americanised accent, leaving no one in doubt as to her identity. And amid all this Where's-Waldo-ishness (badly done, of course, because the actual game is deuced difficult), there's a story, because at some point, the writer, director and part-producer Rakesh Srinivas seems to have realised that he needs one.

So, anyway, SGV (ugh!) is a flamboyant filmmaker who makes violent cinema that oscillates between inspired and derivative. He occupies his writer's block with inane proclamations on blood feuds among ants that the media runs away with, and on telling his moronic assistants that Ayn Rand and Nietzsche exist. At the same time, as an aspiring director, he is the makers' aid in pointing out the follies of Tollywood's more ridiculous affectations by the dint of neatly chalking out every way in which things are wrong with the existing mode. As we already mentioned, subtlety doesn't seem to be the makers' strongest suit.

Alongside these two personae, our hero also manages to get himself kidnapped and abandoned chained to the wall in an isolated shack. Here, he is left a taunting message on a cassette player (a mysterious apparatus that emits recorded sound), and tantalised by the hope of survival with a week's worth of rations and an axe nailed frustratingly out of reach.

And now, as the screenplay shifts between past, near-past and present, we grow more and more muddled. This is due to two things. 1. Your recognition of the shift in time-lines depends on actually following the plot, which is as difficult a task as it is thankless. 2. The fact that they were compelled to turn a ridiculous protagonist into a hero figure means that you don't quite know whether to laugh at him or admire him. While the obvious option would be to do the former, actor Shafi makes this surprisingly difficult to do.

Unlike those in-charge of the film, Shafi seems to have gotten right into the spirit of things. He takes on all the mannerisms of a certain egotistical filmmaker with insouciance and an utterly straight face, all the while retaining his own individuality. He is incongruously arresting in a film that is almost uniformly groan-inducing.

Zoya Khan makes very little of her rather interesting role, and is a bland foil to the idiosyncrasies of the protagonist. The rest of the cast is made up of caricatures planted to aid the aforementioned process of pointing and laughing.

The camera work is decent for the most part, but belies the low budget of the project, something that quite a few low-budget flicks have managed to avoid in the recent times. The soundtrack is as mediocre and pretentious as the rest of the film. The editing does nothing to unentangle the feverishly muddled plot, and instead puts undue strain on your brain as you try to figure out the bit of space-time the film has left you in every few minutes.

A Shyam Gopal Varma Film tries to be a satire and fails. It tries to be a mystery and fails. It even fails at its rather confused attempt at a biography. All it succeeds at is at mildly amusing you as you play at spotting this and that reference, just in case you accidentally find yourself in a theatre screening this mockery of mockery. Save yourself time and trouble, and give this one a miss.
Share. Save. Connect.
Tweet
A SHYAM GOPAL VARMA... SNAPSHOT
A SHYAM GOPAL VARMA FILM SNAPSHOT 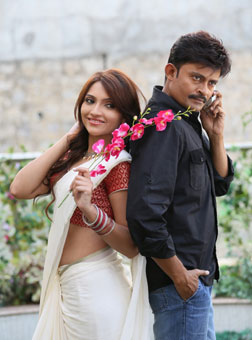 ADVERTISEMENT
This page was tagged for
A Shyam Gopal Varma Film telugu movie
A Shyam Gopal Varma Film reviews
release date
Shafi, Zoya Khan
theatres list
Follow @fullhyderabad
Follow fullhyd.com on
About Hyderabad
The Hyderabad Community
Improve fullhyd.com
More
Our Other Local Guides
Our other sites
© Copyright 1999-2009 LRR Technologies (Hyderabad), Pvt Ltd. All rights reserved. fullhyd, fullhyderabad, Welcome To The Neighbourhood are trademarks of LRR Technologies (Hyderabad) Pvt Ltd. The textual, graphic, audio and audiovisual material in this site is protected by copyright law. You may not copy, distribute, or use this material except as necessary for your personal, non-commercial use. Any trademarks are the properties of their respective owners. More on Hyderabad, India. Jobs in Hyderabad.