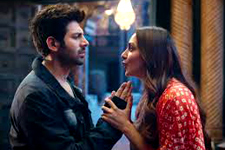 Punarvasu Pendse / fullhyd.com
EDITOR RATING
4.5
Performances
Script
Music/Soundtrack
Visuals
6.0
4.0
2.0
7.5
Suggestions
Can watch again
No
Good for kids
Yes
Good for dates
No
Wait for OTT
Yes
Priyadarshan's 2007 smash-hit horror-comedy Bhool Bhulaiyaa was an entertaining if loud film that ended up dealing with a sensitive topic like mental illness in a manner that was certainly admirable back when it was released. It cleverly took us away from the typical "bhoot-pret" nonsense and embraced rationality, in its convincing twist.

So why go back, especially when you call yourself the sequel (in essence) of Bhool Bhulaiyaa? It is going to obviously draw comparisons with the original, and not in a good way.

Director Anees Bazmee's film plays it safe, veering away from Priyadarshan's darker theme for a more balanced palette. Bhool Bhulaiyaa 2 is trying to scare you for most of its 143-minute running time, but more often than not it is the film's attempts at comedy that tend to land.

Reet (Kiara Advani) fakes her own death for her cousin's sake, and enlists the smooth-talking Ruhan (Kartik Aaryan) - a guy she met one day ago - to help her with her plan after that to move back to her own home, an abandoned haveli somewhere in Rajasthan that is said to hold the imprisoned spirit of Manjulika, a woman punished for her evil deeds and black magic.

Ruhan becomes Rooh Baba, and through some fortuitous events ends up helping the local populace fulfill the last wishes of their loved ones. Reet's family accepts him, believing that he can commune with the dead, and so can connect with Reet. Just when everything seems to be okay, all hell breaks loose when Reet hides in the room where the notorious Manjulika is locked.

Bhool Bhulaiyaa 2 is not a bad film per se, but in our humble opinion it should have been its own film. Granted, there's no real relation to the original - apart from the name Manjulika, Rajpal Yadav appearing as a pandit again, and the obnoxious musical throwbacks with multiple songs being referenced - but is that enough to be worthy of being the "spiritual" (pun intended) successor of a cult classic?

Despite main man Kartik Aaryan being unfunny and over-the-top as Rooh Baba, there are some jokes in Bhool Bhulaiyaa 2 that you would not expect from an Anees Bazmee film, with Sanjay Mishra's pandit character's "accha din" comment particularly taking us aback, as did his character marching with a bunch of extras chanting "Apna time ayega". That is not to say that the film is particularly funny - a lot of the jokes are concentrated on five characters who only seem to have been included to be the butts of jokes. There are multiple fat jokes about a kid - the writers can do better (as they have clearly shown with some of the other jokes). All that said, the comedy is still handled better than the horror.

Speaking of horror, why do ghosts look like pale zombies in modern films? Manjulika, played by Vidya Balan in 2007, seemed to have better make-up in 2007 than in this movie, with the garish white paint and a splotch of red here. We sorely need some creativity in that field.

Leaving that aside, Bhool Bhulaiyaa 2 has some great visuals - a towering haveli, the hustle and bustle of a Rajasthani village, and the dark interior of the aforementioned haveli, especially in the flashback sequences filmed with a shaky camera. Sandeep Shirodkar's score is unfortunately not at the same level, being loud and referencing the original Bhool Bhulaiyaa way more than necessary. Neither Pritam's nor Tanishk Bagchi's music is engaging, with "De Taali" by Pritam being especially off-putting.

Kartik Aaryan brings to the table a typical Kartik Aaryan performance - brash and loud, but energetic and confident. The script has Kiara Advani hiding for most of the film's duration, and she just feels like convenient plot advancement along with being a love interest for Aaryan. Not that the chemistry between the duo is anything special.

What - or rather who - is special, though, is Tabu. The veteran actress delivers a powerhouse performance in a movie that doesn't seem to deserve her, and will definitely draw comparisons to Vidya Balan. The supporting cast, comprising the likes of Rajpal Yadav and Sanjay Mishra, is quite able.

You can do worse than watch Bhool Bhulaiyaa 2 - it is a family-friendly movie apart from some double entendres, and the horror sequences won't be too scary for the kids. Just don't expect a repeat of the original.
Share. Save. Connect.
Tweet
BHOOL BHULAIYAA 2 SNAPSHOT 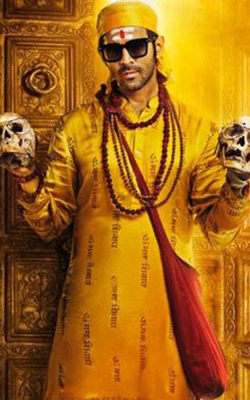 ADVERTISEMENT
This page was tagged for
Bhool Bhulaiyaa 2 hindi movie
Bhool Bhulaiyaa 2 reviews
release date
Tabu, Kartik Aaryan
theatres list
Follow @fullhyderabad
Follow fullhyd.com on
About Hyderabad
The Hyderabad Community
Improve fullhyd.com
More
Our Other Local Guides
Our other sites
© Copyright 1999-2009 LRR Technologies (Hyderabad), Pvt Ltd. All rights reserved. fullhyd, fullhyderabad, Welcome To The Neighbourhood are trademarks of LRR Technologies (Hyderabad) Pvt Ltd. The textual, graphic, audio and audiovisual material in this site is protected by copyright law. You may not copy, distribute, or use this material except as necessary for your personal, non-commercial use. Any trademarks are the properties of their respective owners. More on Hyderabad, India. Jobs in Hyderabad.